Entries are now closed for Durham Long Distance Sculls and Durham Autumn Small Boats Head. The draw will be published on or after 26th October 2015.

After winning the gold medal in the J16 girls single sculls at this year’s National Junior Championships one of Durham ARC’s most promising young scullers Hope Cessford continued her excellent form, this time competing in a coxless quad at the British Rowing Senior Championships, held at the National Watersports Centre in Nottingham over the weekend of October 17th/18th. Hope was racing in a composite crew along with Lauren Irwin of Chester-le-Street ARC and Katy McDonald and Rosalind Wilson from Durham University Boat Club.

The crew won through to the B final, winning the national under-19 championship by 15 seconds in the process, and finishing as the 9th fastest 4x crew overall. The A final was won by the Great Britain national squad of Victoria Thornley, Victoria Meyer-Laker, Polly Swann and Jessica Leyden, representing the Leander club.

The national Senior championships has been rescheduled to October in recent years, after previously being held during the summer months, so as to be at a more convenient time to allow national squad members to represent their clubs and compete alongside other club rowers, serving as a means to identify and develop new talent from within the club system and enabling top rowers to be role models for the next generation.

This year’s Long Distance Sculling Series is into full swing with rounds at Cambois, Berwick and Tees already completed and the Durham round due to take place on October 31st.

The series, which opens the winter heads season, is organised by the Northern Rowing Council and takes place over 6 consecutive weekends at venues across the north-east, including courses of varying length up to 5km.

Increasing popularity in recent times has led to additional rounds being added and for the first time in many years this year’s series includes a visit to Berwick to take in the picturesque waters of the River Tweed. In addition to the Long Distance Sculls (LDS) several clubs have taken the opportunity to host a Small Boats Head (SBH) on the same day, providing the opportunity for competitors to race in sweep oared as well as sculling events.

The Masters and Juniors continue their good form, with the men’s Masters D/E quad following up their win in the Boston Marathon with further successes at Wansbeck, Berwick and Tees, and three different Women’s D/E coxless and coxed quad sculls combinations also winning at the 3 venues. Having bought their own boat to alleviate demand on club boats the Masters D crew of Carole McCarthy, Clare Woodward, June Davison and Susan Jackson remain unbeaten since winning at the British Rowing Masters Championships in June. Competing in a higher age category Aidan Rushforth won the single sculls at J18, IM3 and IM2 levels at the Wansbeck and Tees heads.

After this week’s LDS round on the Tyne a large entry is expected at Durham for the LDS on the morning of 31st and the Autumn SBH (a new event on the calendar) in the afternoon. Both take place over the 1800 metre long course, with crews passing under Elvet Bridge. Volunteers are as usual needed for timing and marshalling as well as to assist with catering. The closing date for entries is October 23rd. The series concludes at South Hylton on November 7th.

Find out more about the series on the Northern Rowing website.

By completing the 2015 Great Tyne Row in September members of Durham ARC raised £1000 in sponsorship, which was divided between 3 charities – Clic Sargent (a children’s cancer charity), Grove House (which supports children with physical or learning disabilities), and Durham Trinity School (a special needs state school in Durham).

Crew members and supporters gathered on October 11th for a publicity shoot before members of the Wear Soarted crew (Gene Dobson, Debbie Jahangiry Gerry King, Colin Lawson and Vaughan Gordon) went to Trinity School to meet some of the pupils and hand over a cheque for £350. The following week £347 was donated to Grove House, with remaining funds going to Clic Sargent. The prize of a bottle of champagne for most accurately predicting the crew’s finishing time of 2hr 04m 25s was won by Heather from Newton Aycliffe.

The Great Tyne Row is an annual challenge that involves rowing 25km in stable boats along the Tyne from Newburn to Tynemouth.

During his short stay at Durham ARC former recreational rower Roger Bean kept himself busy when he wasn’t rowing by restoring the single scull ‘J. Hopper’ that he acquired in 2012 and kept in Clive Hole’s boathouse.

Having moved away from Durham Roger’s restoration project has continued and is now nearing completion. Catch up with the fascinating story in boat builder Clive Radley’s blog.

The 2015 Sunday League drew to a close at Tyne ARC on October 4th after a busy conclusion to the season due to the postponed Talkin Tarn skills round being slotted in two weeks earlier. With the Tynemouth round cancelled in May because of unsuitable weather conditions this meant only 7 of the 8 scheduled rounds were completed. 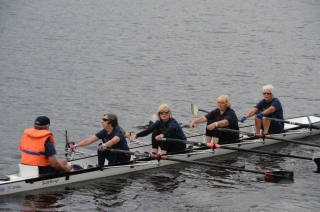 Ongoing renovation work on the Tyne ARC clubhouse meant outdoor catering for the day but thanks to fine conditions there was no dampening of enthusiasm for the 15 teams taking part. The winners of both the open and women’s leagues had been decided prior to the final day but there was a close contest for the minor places. DARC Demons (Maureen Miller, Gene Dobson, Shirley Robinson, Debbie Jahangiry and Margaret Richardson) held on to 2nd place in the Women’s section behind the winning Tyneapple Chunks team from Tyne ARC. The final round took the form of sculling splash & dash races over a 300 metre course. As usual there were some close races with Tynetanic holding off DARC Desperados by a foot in the final race to retain their half point advantage in the overall table. Up Tyne Funk from Tyne ARC remained unbeaten throughout the whole series, finishing as clear winners of the Open section ahead of Weary Old Gits from Chester-le-Street.

Trophies and prizes were presented to the winners and runners-up by Gillian Latham from the Northern Rowing Council. 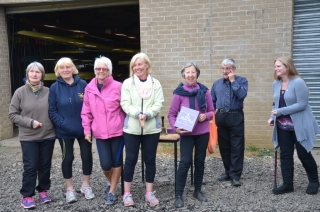 The 2016 series gets underway at Tyne United in March, with the first visit to a new venue at Berwick lined up for June.

The final league table is on the Northern Rowing website.

The format is increasing rapidly in popularity with similar Explore leagues starting up in the North West and Yorkshire, West Midlands and Thames Valley regions during 2015.

For more about previous years see the Sunday League page.

The poster for Durham Autumn Small Boats Head on the afternoon of October 31st is now available.

For details of the morning LDS see the Northern Rowing poster.