With the Tideway Heads season fast approaching there was a good win for Durham’s Masters F Eight at the Head of the Trent in Nottingham on February 26th. The crew was 4th finisher of the 13 masters 8+s entered in division 3 over a 6km course shortened due to windy conditions. Taking into account masters adjustments the DARC eight recorded the fastest time of all 65 entries in the division, posting 10.49.3 and beating all the masters B, C, D and E 8+s as well as junior and intermediate crews.

Despite very challenging conditions it was a successful day for the juniors on Saturday at the Junior Inter-Regional Trials at Cambois RC, with wins for the WJ16 8+, WJ15 4+, WJ15 4x+, and WJ14 4x+. Every girl from the club who raced was in a winning crew.

Results of the trials determine crew selections to represent the Northern Region at the Junior Inter Regional Regatta (JIRR) at Nottingham on April 22nd.

For the boys, Sam Taylor, racing in the J16 1x is likely to be selected for the regional composite 8+, while the less experienced J15 and J14 boys also were competitive in their respective events.

List of results from Cambois on Saturday and photos by Al Johnston starting here.

Durham Small Boats Head took place on February 4th 2017 in calm conditions with spells of winter sunshine, the rising river level after overnight rain making the afternoon divisions more challenging. A busy day ensued with a full entry in all 4 divisions and 370 crews and scullers completing the course, with no reported incidents. 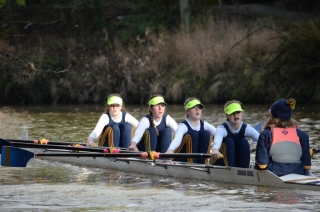 St Leonards was the overall winner of the head with their J18 coxless quad clocking 6.06.7 for the 1800m course. 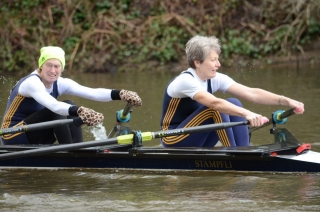 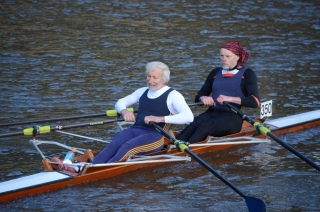 George Heriots School and Chester-le-Street were well represented with 7 wins each, Heriots taking the fastest women’s pair and Chester-le-Street having the fastest women’s single sculler as well as providing both joint winners of the Elite pair. Hatfield was the most successful College with 3 wins including the IM3 coxed four. Durham School won the Novice coxed four and Collingwood College the women’s novice four.

The overall results are on DARC website (and XLS), list of Durham ARC wins here and photos here.

The launch of Durham Regatta’s new website took place at Durham ARC on Monday this week.

The new design honours the rich history and traditon of the Regatta but has a contemporary, modern feel. The website http://durham-regatta.org.uk/ is also optimised for all mobile devices – ensuring that everyone can easily access the information relevant to them.

Recognising the volunteers who make a significant contribution to the sport the awards presentation to the winners of British Rowing’s Volunteer of the Year for 2016 took place at a lunch at the River & Rowing Museum at Henley-on-Thames on February 4th.

Winner of the Event Administration award for the Northern Region, on behalf of Durham Regatta was Richard Mortimer of Durham ARC.

Coverage will appear in Rowing & Regatta magazine and in the British Rowing Almanack in due course.

Richard is pictured along with Nicci Slipman of Hexham RC receiving their awards from guest speaker Dame Katherine Grainger.

The draw (PDF) (XLSX) and Competitors Instructions are now available.