Successes come in ample doses for DARC at the Met, Durham Regatta and National Veterans Championship

After months of training the senior men’s squad from Durham Amateur Rowing Club travelled to London hoping to compete at one of the most prestigious events in the rowing calendar – the Metropolitan Regatta.

The Men’s  Intermediate 2 8+ event took place on Dorney Lake  in Eton, home of the rowing events at the Olympics games  2006 and will be the venue for the Olympics in 2012, on the eight lane, 2k stretch of water.  This was the first time in many years that the senior crew has attempted to compete in the ‘Met’ for the 154 year old Metropolitan Challenge Cup.

After a closely fought race against crews from Nottingham University and Jesus College Cambridge, Durham Amateur Rowing Club did not disappoint.  Winning the most coveted trophy by 0.012 of a second represents a massive step forward for the crew now with Henley qualifiers in their sights. 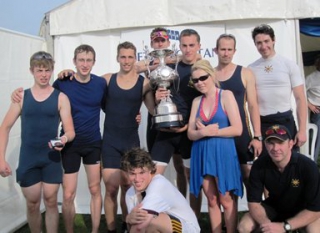 This year at the 177th Durham Regatta, Durham Amateur rowing club entered 50 crews all racing for pots or assorted trophies which were presented on the final day of racing at the Town Hall.  Being the most prestigious event in the north of England Durham Regatta  attracts a high level of competition at both a national and international level.

With competitors ranging from 13 to 65 Durham Amateur Rowing Club competed in a variety of different events.  There were strong performances across all races ranging from singles right up to 8+’s  with the inter-club rivalry as fierce as ever.  DARC’s veteran men 8+ being in the age category of E which is ?? were racing a crew that were age category C entitling them to a head start.  The DARC crew declined the head start and proceeded with a relatively easy win over their younger opponents before heading off to the National Veteran Championships in Nottingham the following day.

The women entered as Masters B coxed 4+ being Becks Lippe, Toria Lloyd, Karen Warrior, Dajana Dzanovic and cox Ruth Barker who won gold medal by 0.01 seconds demonstrating the high standard at this event.  Racing the Masters 8+ the women’s crew including Dajana Dzanovic at bow, Karen Warrior, Andrea Preston, Jane Scott, Judith West, Helen McDaid, Toria Lloyd, Becks Lippe and cox Ruth Barker took third place with 0.033 of a second between them and the winners Nottingham Rowing Club.  Martin Tyler racing as Masters E category in his 1x pulled in third place 0.633 of a second slower than the winner.  Four of the Veteran men out of the 8+ raced again in a different combination.  The penultimate race of the day was the Masters F men’s coxed four which was won by John Appleby, Kim Metcalfe, Paul Stanley, Mickey Steven and cox Emma Watcham with Martin Judson and Dave Walker taking silver in the Masters E4+ with a Blue Star composite.

Last weekend the Durham ARC senior men’s squad travelled down to Dorney
Lake in Eton (home of the Rowing events at the 2012 Olympic games) to
compete at one of the most prestigious events in the rowing calendar-
the Metropolitan Regatta. This was the first time in many years that a
senior crew from the club has attempted to compete at the “Met” and the
crew did not disappoint, winning one of the most coveted trophies – the
154 year old Metropolitan Cup. This win represents a massive step
forward for the crew, which has qualification for Henley Royal Regatta
in it’s sights.

The Senior men would like to thank their coaches Bill Pollard(pictured), Kim Metcalfe, Jed Gargan and Phill Tully.