Heavy rain during the week raised concerns about prospects for York Small Boats Head but come the day autumn sunshine prevailed allowing all 3 divisions to go ahead as planned over 3km on the River Ouse on Sunday, November 20th. Durham ARC had 20 entries from a range of squads and 6 wins were secured.

The Juniors had a good day. The J17 boys’ quad (Harry Coe, Josh Stephenson, Matthew Skinner and Matthew Edge) comfortably beat local club York City, but finished second to a strong crew from Warrington RC. They then entered at IM3 level, again finishing second, this time out of 9 crews. 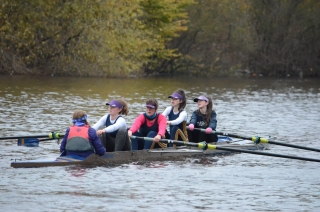 The J15 boys double of Mark Humphries and Adam Morris, taking part in only their second race, finished first out of five crews, beating the second placed crew by 37 seconds. 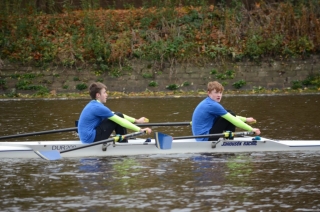 The Women’s Novice 4+ was depleted by illness and injury, with cox Lily Sanderson and Junior Co-ordinator Vickie Jackson joining the crew at the last minute, enabling them to finish 11th out of 15 adult crews.

For the Seniors Emily Hanscam secured her first win in the Novice single sculls overcoming scullers from Leeds and Sheffield City by 30 seconds. 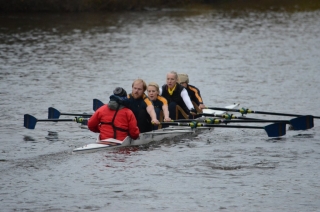 In the Masters Gill Prescott and Eva Rankin won the Women’s Masters E 2x. Owing to a substitution for a late illness casualty the Women’s Masters D 4x+ switched category to Open Masters D 4x+ and won with the crew of David Muse, Kim Forster, Gabrielle Moore and Joyce Collett coxed by Nigel van Zwanenberg. Roger Stainforth and Martyn Calkin entered as a Masters F 2x but were unable to emulate their success at this year’s National Masters Regatta, finishing 6th behind Guy Fawkes RC.

Following thorough analysis of the second landslip, a design to stabilise the ground has been completed. Additional soil nailing works were also required to stabilise the steepest parts of the bankside. A mesh will be installed at the surface and vegetation allowed to grow through. Work continues to stabilise the slope using stone and ‘geoweb’ retaining walls, which we have used to keep as much of the existing material in place as possible.

Some trees have had to be removed in consultation with our tree officer where access to carry out the works was not possible. As many of the existing trees have been retained as possible.

Soil nailing works will take around 5 weeks to complete, however there will be further  work to stabilise the ground which will take until early 2017 to complete.

We are hoping to reopen the footpath in February 2017.

For regular update and more information on the scheme please visit www.durham.gov.uk/pelawwoodlandslip

Cold wet conditions failed to dampen the enthusiasm of the record entry for the Bonfire Night double header of the Northern Rowing Council’s Durham Long Distance Sculls (LDS) and Durham Autumn Small Boats Head (SBH) organised by Durham Amateur Rowing Club. With a field of 124 entries for the morning sculling race and 108 for the afternoon head organisers had their work cut out to keep to the schedule. As always at Durham crews have to negotiate the arches of Elvet Bridge halfway along the 1800 metre time trial. Racing is keenly anticipated, and quads, doubles, singles, fours and pairs representing clubs, schools and colleges from across the northern region duly rose to the challenge.

St Leonards School ruled the roost this year with the J18 quad winning both events, holding the Durham ARC J17 boys at bay in the morning then outpacing Stephenson College in the afternoon, while Aidan Rushforth was the fastest single sculler of the day.

It was a successful day in the two events for DARC’s Juniors, Seniors and Masters with 12 wins in all. 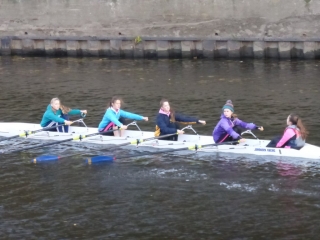 The 10 Junior crews produced 5 wins, 3 second places and 2 third places between them.

The J17 boys didn’t have any competition in their own age category but were the second fastest crew over the course in the LDS in a time of 6 minutes and 18 seconds.

The J15 girls quad won their category in both LDS and SBH, while the J14 and J13 girls quads also won in the LDS and the J14 boys quad won in the SBH, a great achievement considering several of the juniors were taking part in their first competitive race.

In the Seniors Kim Forster and David Muse won the Mixed IM3 double sculls and there was a win for the Women’s Novice coxed quad in the LDS while Elliot Kay and Brad Knights won the Elite pair in the SBH.

The Masters consolidated wins from the 5 previous rounds of the LDS with Andy Jaggard and Joyce Collett again winning the Masters F 1x and Women’s Masters G 1x respectively, and Angela Lund and Gabrielle Moore won the Women’s Masters E 2x, while the DARC Masters D crew was the fastest Masters coxless quad in the SBH.

Joyce has been the most consistent of the Masters winning 4 rounds of the LDS series, sometimes being the fastest masters sculler of the day in any age group and only missing out on a 5th victory through lack of opposition.

Results of the LDS and SBH.

Archive of DARC wins at events.

Al Johnston has provided photos of the LDS and SBH.

Points accumulated over the 6 rounds of the Long Distance Sculling Series count towards Victor Ludorum awards where scullers win points for their club in Junior, Senior and Masters categories. Durham finished on the leader board in two of the categories, taking 2nd place in the Senior events and 3rd in the Masters. Points are scored according to the number of opponents beaten by boat class within category.

Series totals are as follows –

The Victor Ludorum trophies will be presented at the Northern Rowing Council AGM in December.

Results for the Wear Autumn Small Boats Head race are now available. Results for the morning Wear Long Distance Sculls event can be found on the NE Rowing LDS site.

Please also read the Competitors Instructions which apply to both events.

Please also read the Competitors Instructions which apply to both events.