One of the most successful years in the history of Durham Amateur Rowing Club’s Juniors section culminated earlier this month with the accolade of Junior Team/Club of the Year at the prestigious Northern Echo Local Heroes Awards.

Now in its 15th year Local Heroes celebrates, recognises and rewards achievements in grassroots sports in the Northern region. As well as discovering the region’s most talented sports people it identifies and rewards those who work behind the scenes and dedicate their lives to grassroots sport, without receiving any recognition. The Junior Team/Club of the Year Award was one of the most keenly contested in the whole of the Local Heroes Awards. 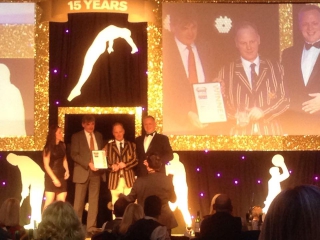 2014 has been one of the most successful in the history of Durham’s Juniors section, which has grown from 15 members to more than 40. Durham has become the most successful junior club in the Northern region, and has also enjoyed considerable success at national level. In total, Durham’s junior rowers won over 70 events at regional or national level this year, training for around 20 hours a week despite school commitments.

‘This is a team award, a big well done to all the coaches, parents and athletes who have contributed this year.’

More on Local Heroes categories and nominees can be found on http://www.thenorthernecho.co.uk/sport/localheroesawards/

Durham Amateur Rowing Club member Roger Stainforth demonstrated recently how rowing is a sport for all ages. Taking part in the Scottish Indoor Rowing Championships in Glasgow on December 6th Roger, who celebrated his 70th birthday in September, emerged with a new British Record in the over-70 age category.

Having taken up rowing soon after his 6oth birthday, Roger specialises in the indoor version of the sport, which takes place using Concept 2 ergos.

The motivation for taking up the sport at an advanced stage of life was provided by his daughter Rebekah taking it up, closely followed by wife Hazel, herself now a former world masters gold medallist and record holder on the water, very much a family affair. 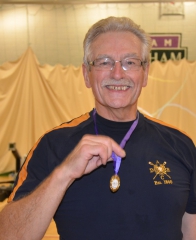 The standard distance for indoor racing in England is 2km but in Scotland the shorter distance of 1km is the norm. Roger travels around the country taking part in regional, national and international competitions and is no stranger to success, having won gold medals over the longer 2000 metre distance in the British and Irish Indoor Championships in 2007 and 2009 in the 60+ age category.

The next target for Roger is the British Championships in February 2015.

The prospectus for Durham Small Boats Head 2015 is now available.