DARC claim victory by a length and a half

On the 8-9th July 2011 21 people from Durham Amateur Rowing Club competed at in London in the Henley Masters Regatta.

Hosted by Upper Thames Rowing Club, the regatta has been held on the week following Henley Royal Regatta since 1994.  The well-known regatta has grown into an internationally recognised event for veterans or masters crews.  Competitors come from all over the world to compete at this two day event.

The 21 rowers, made up from eleven men and ten women rowers and their universal cox Emma Watcham this year travelled to Henley with high hopes of victory.  During this two day event DARC was represented by 7 crews. A women’s masters A 4+ of Becks Lippe, Di Dzanovic, Jane Scott and Toria Lloyd, a masters B 4+ of Becks Lippe, Nat Burgess, Judith West and Toria Lloyd, with Gill Prescott and Aillie Ord from Strathclyde doubling for a D 2x, Gill Prescott raced in the D 1x and the Masters E 8+ who all finished within six feet of their winning opponents in the heats or the finals.  Then with 2 crews remaining victory finally come home in the form of the women’s D 4x who had four minutes of side by side racing with neither crew surrendering before the Durham crew of Hazel Stainforth, Judith West, Carolyn Edwards and Dajana Dzanivic finally beat the crew from Lea rowing clubby 6 feet.  The men’s F8+ who won silver, beaten by one second at the National Championships and were finally rewarded when, a length and a half ahead, they came storming past the finish line in first place consisting of Derek Gordon at bow, Paul Rutter, John Watkinson, John Appleby, Dave Walker, Martin Judson, Kim Metcalfe, with Paul Stanley at stroke and Emma Watcham coxing.

DARC bring home 8 Golds 5 Silvers plus the Victor Ludorum from the National Masters Championships 2011 in Nottingham.

On what was a deceptively sunny day, members from DARC travelled to The National Water sports Centre in Nottingham, located on the river Trent. It was here that the British Masters Rowing Championships 2011 were to take place on the 12 June 2011.

Racing commenced on a sunny morning at 9.06am for DARC with the women’ s Masters C 2x (double) competing in their first heat. As the day progressed and medal wins mounted and the weather turned into what could be the wettest Masters Championship in living memory with 25.4mm of rain according to the Met Office. Although this wasn’t enough to dampen DARC’s spirits. They carried on their winning form throughout the day. 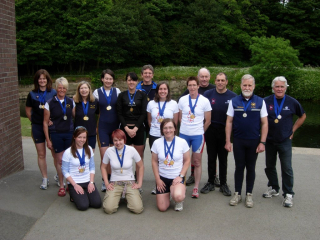 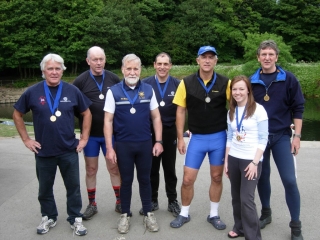 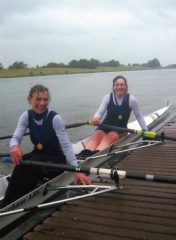