Sustained high temperatures and unprecedented rainfall during December have taken their toll on the River Wear with flood defences being put into place twice within 3 weeks, the Environment Agency recording levels of around 2.90 metres on December 6th and again on the 26th, compared to the normal river level of around 0.50 metres. 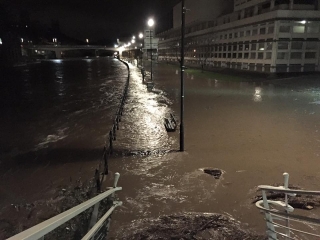 This meant club staff being summoned in response to Environment Agency flood alerts to install the flood defences and move vulnerable equipment at 3am on the 6th and again on Boxing Day. After Storm Desmond on the 6th and Storm Eva on the 26th fears over the arrival of Storm Frank on December 30th proved unfounded. On each occasion the rising water stopped just short of the building and the defences weren’t put to the test. Nevertheless the decision was taken to leave the sandbags in situ and keep the club closed over the festive season with all buildings sealed and the drainage system disconnected between Boxing Day and New Year’s Eve to guard against possible further flooding. Our thoughts are with those across the north of England and south of Scotland who have suffered worse than us. 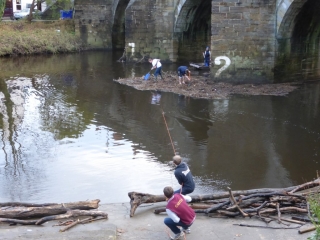 As a result of the aftermath Elvet Bridge has remained blocked by debris throughout December despite valiant attempts to remove trees from its arches. 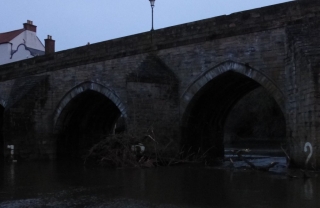 Durham’s topography means that flooding remains a constant problem, although recent disruption falls far short of the highest recorded instance on July 18th 2009 when the river level reached 3.71 metres. Other notable heights in excess of 3m occurred on September 25th 2012 and May 18th 2013.

Since the inception of the Environment Agency in 1997 regulation of waterways has become more stringently regulated and subject to ever increasing legislation. The European Water Framework Directive (EWFD) was adopted in 2000 to manage the water environment throughout Europe, ensuring that waterways are maintained in a good ecological state. In compliance with this the Environment Agency has a management plan for waterways within specific river catchment areas, with the River Wear falling into the Northumbria River Basin District. 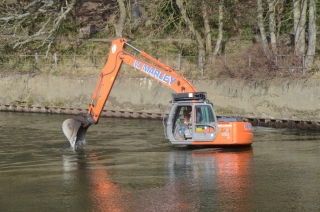 The management plan focuses on numerous areas, including flood risk mitigation, and the Agency has been keen to receive feedback, via consultations, that can be used to modify the plan. Other aspects involve the clearance of obstructions caused by flood debris, and the dredging of the river, which has been a constant issue in recent years as the EWFD precludes dredging and imposes funding restrictions. Since 2010 the club has negotiated agreement allowing a certain amount of dredging to be carried out by moving gravel from one part of the river bed to another, but the silting problem remains. In an attempt to ensure the sport can continue to flourish a response to the latest Agency consultation pointed out that many rowing clubs are based on managed waterways on tidal rivers or lakes where obstruction and silting aren’t an issue. In addition it was suggested that rowing should be included as one of the activities listed under the Agency’s Leisure/Tourism category, thereby qualifying the Wear as a managed waterway. 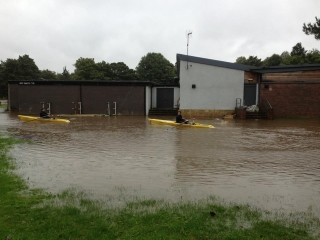 With the storms abating for the time being the club will reopen in time for the New Year’s Eve party to go ahead starting at 8pm. The New Year scratch regatta planned for January 3rd 2016 will be dependent on conditions.

A new event on the social calendar took place the weekend before Christmas. The Christmas Jumper Row was devised and organised by Vanessa as a fun festive occasion to start off the holiday season by engaging members with the added spice of an element of competition.

Timed to take place after Saturday morning training and followed by a buffet lunch it attracted 25 entries from Juniors, Masters and daytime rowers suitably bedecked in festive attire. Five teams of 5 were drawn and assigned to mixed teams for races to Baths Bridge and back in stable quads. A fun time ensued with crews setting off from the landing stage in pairs and then landing at designated points to answer Christmas trivia questions, before continuing. The winning crew was declared according to a combination of race time and quiz score. 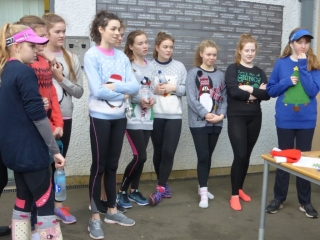 After some close racing a clear winner emerged thanks to their 100% quiz score. The judges also awarded men’s and women’s prizes for the most stylish jumpers to Roger (enjoying some light relief after victory in the Olympic Velodrome the previous weekend) and Paddy, before everyone retired to the bar to enjoy a festive buffet. 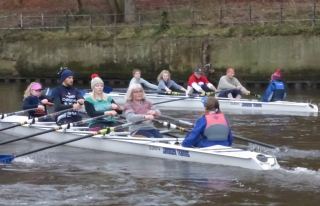 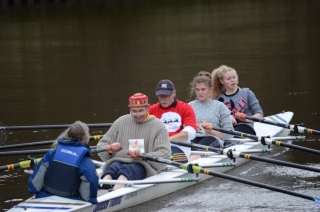 Durham ARC had a successful day at the 2015 British Rowing Indoor Championships held at the Lee Valley VeloPark in London on December 12th, bringing home 3 gold medals, with Joyce Collett winning in the Lightweight Women’s category for ages 60-64 over both the 2km and 500 metres distances, and Roger Stainforth securing victory in the Open category 2km for ages 70-74.

Roger is no stranger to indoor rowing competition, having won several times previously in national championships as well as setting British age category records. Victory in a time of 7min 15.6sec gave him 3 consecutive British titles. He now looks forward to the Irish and English championships in January 2016. 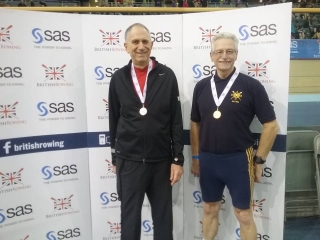 Joyce was taking part for the first time in the British Championships, having taken up indoor racing only a year ago and having won already over the two distances at the English Championships in March. Cheered on by her sister and nephew she achieved a personal best time of 8min 25.3sec in winning the 2km event and achieved 1min 57.0sec for the shorter distance. Her success acts as a glowing recommendation for the Explore Rowing programme from which she graduated in 2011.

The Championships take place using Concept2 ergos and is open to anyone to enter. This year’s event attracted thousands of entries, with competitors of all ages and from around the UK taking part in individual and relay races. Among the other highlights of the day was Mo Sbihi of Team GB breaking Matthew Pinsent’s 11 year-old British record with a time of 5min 41.8sec for the Open men’s 2km distance. 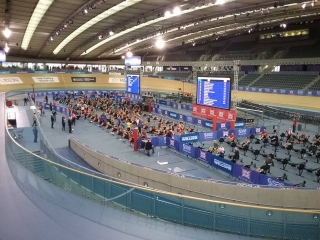