Durham rowing Olympian, Jess Eddie, visited the club on the 6th October to launch our newest racing boat, the “Jessica Eddie”, a lightweight Eight named in her honour.

Jess, who attended St.Leonard’s School in Durham and learned to row on the River Wear at age 8, joined Durham ARC as a teenager before being picked for the GB squad when she was just 16. She has since rowed for Great Britain as a Junior, Under 23 and Senior rower, competing in the GB womens’ 8 in both the 2008 and 2012 Olympics. She most recently finished 4th in the 2013 World Championship. 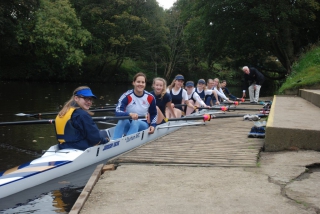 During the morning she spent an hour coaching our Junior squad and then took the boat for its first spin with a combined crew of lucky women and juniors. Jess took the stroke seat and joked that she “normally sits at Bow side, but would make an exception in this case”. Clive was heard to murmur approval at her long stroke and slow slide before the crew returned to the landing to carry on with the interviews and photographs.

Before the ceremony, Jess took the opportunity to present the club with a framed shirt that she wore when racing in the 2012 Olympics. There were questions from the crowd as to whether it had been washed, and Jess’s mum confirmed that it had.

After the launch, Jess said “To have this boat with my name on it, is an enormous privilege and I’m delighted to be able to launch her. I’m especially pleased that it will be used by the next generation of junior rowers and I hope that they will enjoy their racing just as much as I have enjoyed mine” 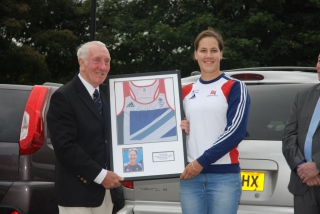 DARC President, Bill Parker, said “Jess has been an inspiration to everyone in the club, young and old. We are very proud of everything that she has achieved and look forward to taking her name to Regattas around the country. Our current junior squad has been performing extremely well, but needed a faster boat if they were to win at national level. We hope that “Jessica” will give us the winning edge for this coming season”

The launch was also attended by the Deputy Mayor of Durham, Councillor Jan Blakey who also expressed an interest in coming down and trying out the boat. Committee take note to follow up!

The “Jessica Eddie”, is the result of a lot of hard work in fund raising by many members in the club over the past year. Many, many thanks to all of them, we hope they now get to fully enjoy the rowing fruit of their labours. 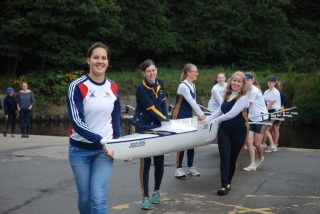 Throughout the morning, Jess was a fantastic role model for rowing, providing excellent coaching, pitching in with carrying boats, talking to all members of the club and fitting in the press too. We all wish her every success in the coming years and hope she gets back to full fitness soon.

The launch was featured on Tyne Tees, the Northern Echo, Durham Advertiser and Durham Times as well as making the headlines on the British Rowing website.