Durham rower Jess Eddie picked up her second gold medal of the British Rowing Championships on Sunday – but not in the way she was expecting.

Gusts of up to 40mph at Holme Pierrepont meant the championships had to be cut short, with medals being awarded based on the morning’s time trials.

And, despite their inexperience in sculling, it was the composite crew of Eddie, Zoe Lee and Olympic and World women’s pair champions Helen Glover and Heather Stanning which had set the fastest pace in the women’s quad.

It came less than 24 hours after the GB Rowing Team international quartet had dominated the women’s four final, leading from start to finish ahead of a strong Leander A team.

“It was a really good race because we executed exactly what we wanted to do,” said Stanning. “Total respect to the teams around us, we train with those girls every day so we knew what they were capable of and what we were capable of.

“It was mainly about minimising mistakes, especially at the start where it was quite rough. There were a few key things we were working on and we knew if we did them right we’d be in a strong position.

Also in Saturday’s fours final were the Durham University crew of Charlotte Drury, Rebecca Dell, Amy Ellerker and Hanna Gailis Inntjore, who took the under-23 lightweight title – and the scalp of arch-rivals Newcastle.

Second-year student Drury said: “This is the last summer regatta for some clubs but it’s our first of the season as students, which is useful as it gives us the chance to get a couple of 2k races under our belts before we start thinking about the Women’s Head of the River over 7k. “It’s a good chance to see where we are at compared to other unis, especially Newcastle!”

Drury was also delighted to line up against the likes of Eddie, saying: “It’s a great experience for us to see top-class rowers and compete against them,” said second-year student Drury.

“You don’t usually get that opportunity, especially if you’re not a trialist. The internationals are all really approachable and friendly as well, so if you want to chat to them and get advice you can.”

Full results and race videos are available at www.britchamps.org

High winds early on Saturday morning seemed to threaten racing taking place but having left Durham early, as the rowers approached Newburn the wind dropped and the conditions were near perfect for racing on the Tyne. There were two events on Saturday, the morning event part of the Autumn Long Distance Sculls hosted this week by Tyne Rowing Club and an afternoon event hosted by Tyne United Rowing Club for both sweep and sculling small boats. 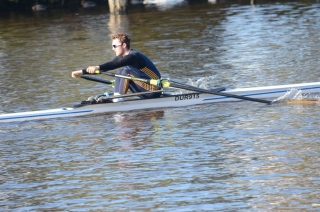 Durham ARC entered 18 crews, eleven in the morning and seven in the afternoon. The J18 boys continued their excellent early season form, fastest quad and fastest J18 double in the morning, then third fastest crew overall in their four in the afternoon and the double was the fastest double. In the single scull J16 category, Aidan Rushforth had an excellent scull winning his event and only just being beaten to fastest sculler by a J18 from Aberdeen, two years older than Aidan.

Success in both the morning and afternoon events also went to another Durham ARC crew, Helen McMillan and Gill Prescott; in the morning they won in their double scull and then teaming up with two Berwick ARC scullers they won in a quad in the afternoon and were the fastest women’s boat overall, always a great achievement for a Masters (veteran) crew.

The 2014 Sunday League reached its conclusion with the final sweep round at Durham on October 5th. We were blessed with fine weather for what promised to be a tense contest for the six teams still in with a chance of the title. 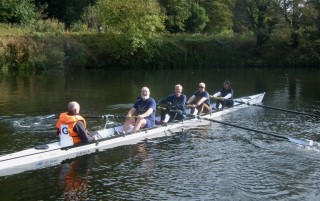 Cakes duly baked and post-event BBQ arranged battle commenced for DARC’s 6 teams. The Dynasaurs came up against the leaders, Tyne Young Boys, in the first round of races and were found wanting which didn’t help their cause, effectively deciding the destiny of the trophy in the Open competition and also ending Darc’n’Dandy’s slender hopes of catching the leaders.

Each round of the League presents fresh challenges for participants. Steering sweep boats along the narrow course taking in a bend in the River Wear was no exception and proved to be taxing for some novice coxes. 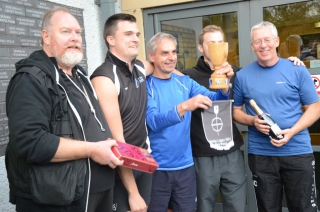 Tees were on half points this time as a result of one of their number attending a wedding, and despite Darc’n’Dandy winning all 4 of their races for the third round in succession it was not enough for them to overhaul the leaders who also won all their races. At the end of the day Tyne Young Boys (TYN) emerged victorious by 2 points with Darc’n’Dandy 2nd, followed closely by DARC Dynasaurs, with Wreckology (Tees) a further point behind. 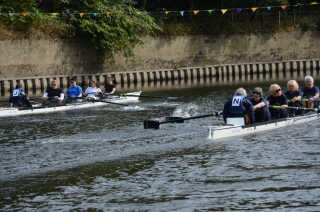 In the Women’s competition Tyney Temp Oar (Tyne) also won their 4 races to extend their 1 point lead over Teeslicious (Tees) and secure victory by 2 points. Go wit’the Flow (DARC) returned to competition after a 4-month break but DARC Demons won 2 races to finish as the top DARC crew over the season, finishing in 4th place overall.

All was superbly orchestrated by Caroline. After a vote of thanks by the incoming President trophies and prizes were presented to the winners and runners-up in each category before the BBQ got underway. 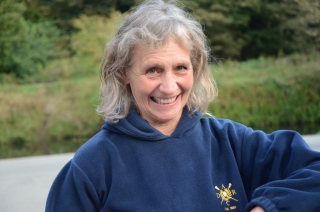 Sadly this was to be the final foray for some but many can look forward to renewing friendly rivalry when competition resumes next Spring as the League goes from strength to strength. 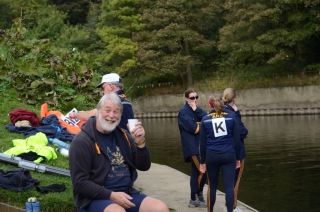 See photos and final placings on Northern Rowing website, and more photos of the day’s events.

The J18 boys in their coxless quad had an excellent row, achieving the fastest time of the day and so making them the overall winners.

The J18 boys also entered a double scull that won their event too. Not to be outdone, the J18 girls put down the fastest time for a women’s crew and won their event. These two results show how strong the top of the junior section at the club is at the moment. The other winning Durham ARC crew was the Masters D double scull of Helen McMillan and Gill Prescott who were the fastest women’s double scull, no mean achievement when racing much younger crews; on an age corrected time they were the fastest of all the women’s boats.

So it was a very successful start to the series for the Durham club, on to Tees for the next race.