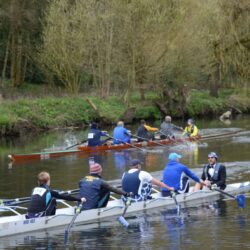 Twelve Off-peak and Masters members from Durham ARC attended this year’s War of the Roses scratch regatta at Bradford ARC. Coinciding with St. George’s Day and the 400th anniversary of Shakespeare’s death it was a suitably momentous occasion, particularly for DARC’s Vaughan Gordon who emerged with 2 medals after his two crews emerged undefeated after[…]