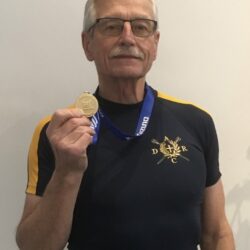 There was a double success for Durham ARC’s Roger Stainforth at the second British Rowing Virtual Championships (BRVC) on September 11th, sponsored by asensei. Roger entered the Men’s 75-79 2k and 500 metre events, winning against his opponent Patrick Wright of University of London Boat Club on both occasions, posting times of 7.46.6 for the[…]