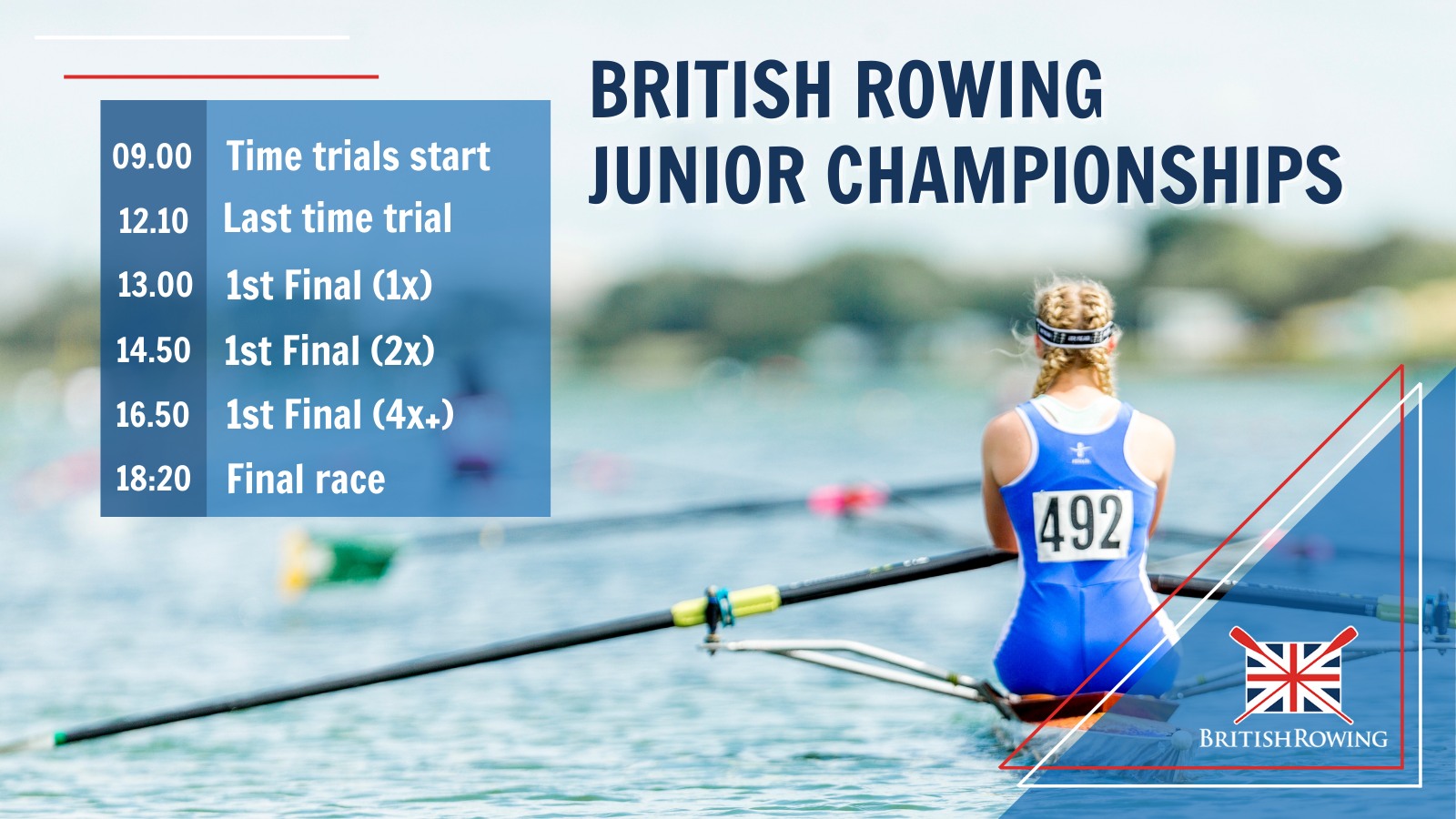 Five crews from Durham ARC went to Nottingham for the 2022 British Rowing Junior Championships over the weekend of July 15th to 17th, the J15 boys double and coxed quad entering for the Friday events, while two J16 boys coxless quads and the J17 girls coxless four started their campaigns on Saturday, and major finals took place on Sunday morning.

Rather than concerns about the strength of the wind that affected the Junior Inter Regional Regatta on their last visit to the National Watersports Centre in May the fear this time was the forecast of record high temperatures approaching 40C predicted for the final day of competiton. As a consequence organisers decided to reduce the overall number of races by omitting semi-finals from the schedule so that all J14 and J15 events could be concluded on Friday, and J16 and J18 racing could finish by midday on Sunday.

The omnium skills events that brought medals for the J14 girls in 2019 were again omitted from the timetable.

All competitors were required to take part in time trials to establish qualification for finals, J14 and J15 time trials being over 900 metres, and J16 and J18 over 1500 metres. The fastest 6 entries from the time trial for each event went forward to the A final, 7th to 12th fastest to the B final etc. Finals were contested with competitors racing side by side in 6 lanes, over 1000 metres for J14 and J15s, and over 2000 metres for J16 and J18 events.

First into action on Friday at 11.05 were Isaac Bolton and Will Terry who finished 15th out of 34 entries in the J15 2x time trial which qualified them for the C final at 16.35. An hour later they were back again, along with Lucas Pippet, Joe Kennedy-Wharton and cox Ben Cardy for the J15 4x+ time trial, this time finishing 19th of 22 to qualify for the D final at 18.05.

The C final of the J15 2x was hotly contested and saw the Durham ARC double getting ahead of Team Keane and Windsor Boys School in the final strokes to take first place in a time of 3.54.18. The result is here. The D final of the J15 4x+ was a three horse race between 3 Northern clubs that resulted in another win for DARC ahead of Durham School and City of Sunderland. Race result here.

On Saturday two Durham crews were among 16 entries in the time trial for the J16 boys 4x-. the ‘B’ crew consisting of Sam Terry, Matthew Flatters, Lucas Walker and James Bruce was 9th in 5.16.4, while the ‘A’ crew of Tom Pfetscher, Luke Davison, Joe Morrison and Finley Scott was 11th in 5.22.3. The result ensured both crews avoided the Saturday C final and qualified for the B final at 11.30am on Sunday.

In the B final of the WJ18 4- Jennifer Napora, Libby Morris, Orlagh Windle and Tilly Stoddart finished second to Molesey RC in a time of 8.56.99. Race result here.

Results of all races can be found on Rowresults and event photos are available from AllMarkOne.

That concludes the racing calendar until competitions restart in September.