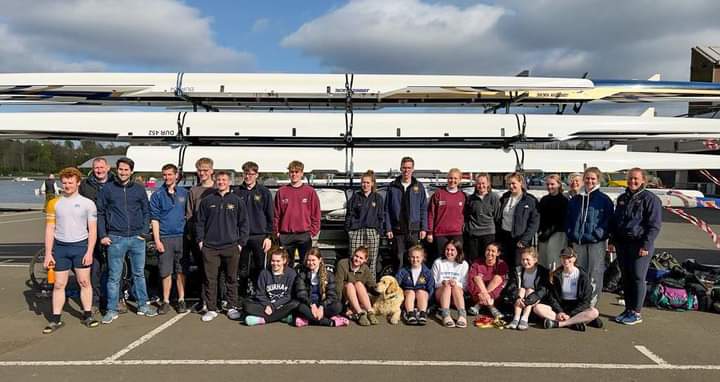 The rowing calendar threw up its usual clash of dates with the Junior Inter-Regional Regatta (JIRR) again falling on the same April weekend as the Scottish Rowing Spring Regatta allowing club members to enjoy two multi-lane rowing lakes on Saturday and Sunday.

Having been cancelled because of forecast high winds in 2019 at Peterborough and by Covid-19 for the JIRR’s planned return to Nottingham in 2020 and 2021 the weather sought to intervene again this year with officials monitoring wind predictions before deciding on the Friday before the Regatta to change the distance and direction of racing in an attempt to avoid the worst of the waves. The number of races was also cut in half, heats were contested over 1000 metres rather than the advertised 1500, and finals were axed. Consequently the junior rowers had to settle for one race rather than two and the outcome was decided according to times recorded over the 1000 metre heats.

Although conditions were difficult racing duly went ahead on Saturday, April 23rd with teams of 14 to 16 year-olds selected from the 12 British Rowing regions travelling to Nottingham and rising to the challenge to represent their region on St George’s Day. Credit goes to the organisers for enabling the event to go ahead, and despite all the changes the competition was declared a success by those taking part.

DARC members made up 3 crews in all or in part, including the J15 boys 2x and the entire J16 boys 8+, while Elise Lambert was the sole representative in a composite J16 girls 8+. Crews had been selected following the trials at Cambois on March 5th, the Northern team also including representatives from Cambois RC, Chester-le-Street, Durham School, Hexham, Queen Elizabeth HS, St Leonard’s School, Tees RC and Tyne ARC.

Results from all the races can be found here. and photos by AllMarkOne are here.

Successes for the Northern region came in the form of gold medals awarded to the J14 1x and J16 1x scullers from Chester-le-Street ARC, and bronze medals won by the WJ15 2x and WJ16 1x from Chester-le-Street, WJ14 2x and WJ16 4- from Queen Elizabeth HS, J15 4x+ from Durham School and WJ16 2- from St Leonards School. The region took 4th place overall in the Victor Ludorum competition and was awarded the Martin Humphrys JP Cup in recognition of being the most improved region since the previous JIRR.

The regatta allows competitors to enter at one of several levels including Junior, Championship, Open, Restricted and Novice as well as Masters, some being required to qualify for finals through a time trial while others go straight into the final of their event which is raced in up to 8 lanes over either 2000 metres or 1000 metres depending on status.

Saturday entries for DARC included David Beeby and Elliot Kay who qualified through the time trial for the B final of the Open 2x in which they finished ahead of several seeded entries, defeating Edinburgh University by 0.2 seconds to take first place.

Jude Dudley, Ellis Black, Lewis Davison and Thomas Crabtree progressed to the C final as one of two qualifiers from the time trial for the J18 coxless four and took 4th place in the final.

The Women’s coxed four (Charlotte Carter, Lee James, Olivia Bothamley-Dakin, Rachel Wilson and cox Libby Morris) entered in the Restricted category and progressed through the time trial to the A final in which they were 4th.

Masters races were over 1000 metres, and with Masters not required to pre-qualify through a time trial Kim Forster and David Muse went into the MasACD 2x final and finished 3rd.

Lewis Davison and Ellis Black in the J18 pair qualified for the D final of the Open 2- by taking 20th place in the time trial, going on to take  2nd place in the final which included senior entries from seeded categories.

Jennifer Napora recorded the 3rd fastest time in the J18 girls 1x time trial which put her into the B final of the Women’s 1x as the 10th fastest qualifier overall, finishing 4th in the final.

The Women’s Novice 4x+ (Katherine Carter, Lucy Beresford, Lee James and Milly Rainford) qualified in 3rd place in the time trial and finished 5th in the A final of the W4x+.

The Women’s 2x time trial included 3 entries from DARC in the Restricted category, recording the two fastest times and the 7th fastest time and therefore progressing to the A and C finals. Nicola Fleck and Lillian Muskett placed 3rd in the A final, Eve Rich and Amy Slater 5th in the A final, and Anna Airey and Ellen Eames 2nd in the C final.

Racing in the Women’s coxless four Alice Davies, Anna Airey, Lydia Kind and Miriam Stewart quaified for the A final where they finished in 4th place.

Niamh Lang, Amy Slater, Eve Rich and Miriam Stewart in the WJ18 4x-were 1st in the time trial and went on to finish 7th in the A final of the Women’s 4x.

Francesca Suggett, Jennifer Napora, Libby Morris and Orlagh Windle were 2nd in the WJ18 4- time trial and took 3rd place in the Women’s 4x/+/- B final.

Jacob Windle and Thomas Crabtree were 5th in the B final of the J18 2x, and Louisa Scott and Sian Davison qualified for the B final in the WJ15 2x.

Thanks go to the organisers of both events for hosting a successful weekend.

Durham City Regatta returns after a 2-year absence on May 7th and 8th.