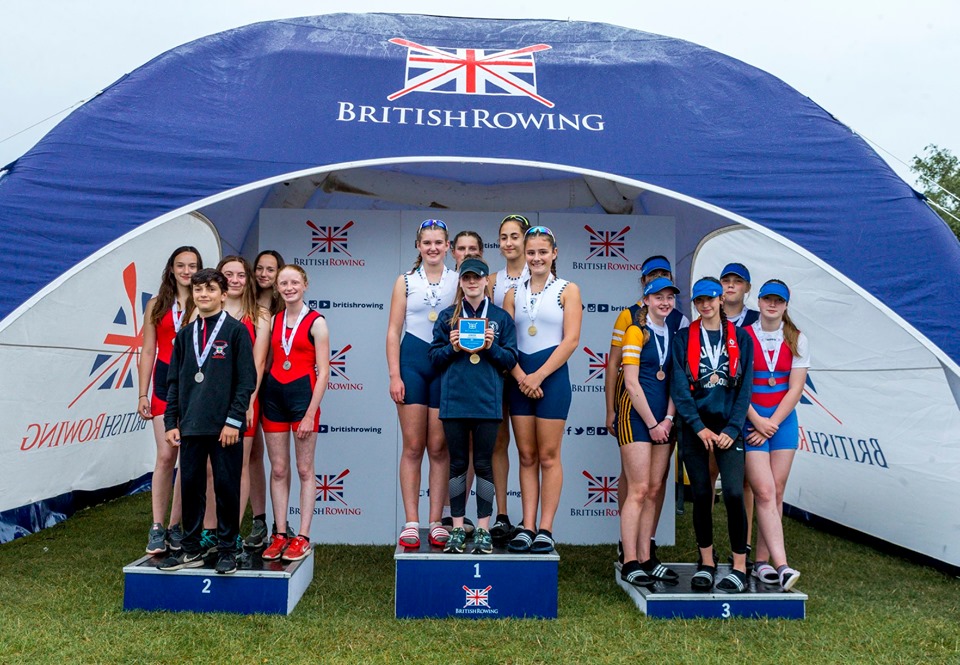 Twenty five Durham ARC Juniors were among over 1600 14 to 18 year-olds from around the country at the biggest ever British Rowing Junior Championships at the National Watersports Centre at Nottingham over the weekend of July 19th to 21st. Along with coaches, parents and supporters DARC was represented in the J14 girls singles, double and quads, J15 and J16 boys and girls quads and J18 single sculls.

The J14 girls were the most successful, returning with two bronze medals from Friday’s events, the first won by the DARC/Chester-le-Street composite of Libby Morris, Jennifer Napora, Amy Snook (CLS), Orlagh Windle + cox Francesca Suggett in the J14 girls coxed quad (medal presentation above), and the second by Libby Morris and Tilly Stoddart in the J14 girls double sculls omnium.

Friday was devoted to the J14 competitions with competitors taking part in an omnium consisting of a series of skills tests in singles and doubles, including hands off at the catch, standing 360 degree turn in a boat, standing rigger dips, back down stop and 360 degree boat spinning, finishing off with a 500m sprint, slalom and emergency stop. As well as this there was a morning time trial over 1000 metres for coxed quads, with finals taking place after the completion of the omnium. Competitors in the 4x+ were required by the rules to also enter for the omnium in either 1x or 2x. The DARC/CLS quad was 4th fastest of 31 in the time trial, and placed 3rd in the A final. 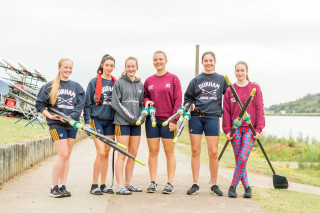 DARC was also represented on Friday in a second WJ14 4x+ including Tilly Stoddart in a Tyne ARC composite who reached the B final finishing 6th, putting them in 12th place overall. Jennifer Napora, Alice Chilvers and  Orlagh Windle took part in the single sculls omnium, finishing in 24th, 54th and 85th places respectively, while Libby Morris and Tilly Stoddart finished 3rd out of 67 competitors in the WJ14 double sculls omnium to win the bronze medal for that event.

Omnium results can be found here.

Saturday consisted of time trials over 1500 metres and minor finals for J15, J16 and J18 rowers, while semi-finals and A and B finals for these age groups, contested over 2000 metres in 6 lanes, took place on Sunday.

Conditions on Saturday were made difficult by wet and windy weather, meaning that the racing schedule had to be revised, with E and F finals cancelled. Adam Morris was unable to repeat last year’s success in the J18 1x, settling for 55th place in a strong field.

The J15 girls coxed quad of Amy Slater, Ruby Coe, Niamh Lang, Georgia Powell and cox Libby Morris finished 18th out of 30 entries in the time trial, qualifying for the C final on Saturday, in which they placed 6th (18th overall).

The J15 boys coxed quad of Ellis Black, Thomas Crabtree, James Humphries, Jacob Windle and cox Thomas Woods finished 16th out of 21 entries in their time trial, also qualifying for the C final in which they placed 3rd (15th overall).

The J16 boys and J16 girls coxless quads placed in the fastest 12 in Saturday time trials, the boys taking 8th place out of 13 entries, and the girls 10th from 16, both qualifying for the semi-finals on Sunday. Both reached the B final of their respective events, the boys crew (Oliver Beattie, Dominic Crilley, Matthew Harrison and Thomas Taylor) finishing 3rd to take 9th position overall in the J16 4x-, while the girls crew (Natalie Einbeck, Madalyn Elmer, Ella Metcalfe and Ella Sampson) were 2nd for 8th place overall in the WJ16 4x-. 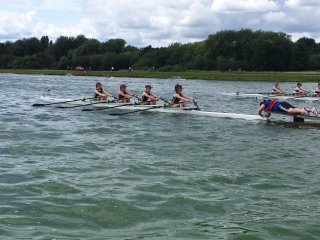 All the coaches were delighted with the performance, providing an excellent conclusion to the season.

British Rowing’s summary of the Championships is here. and coverage of Saturday and Sunday finals is available on BR’s YouTube channel.