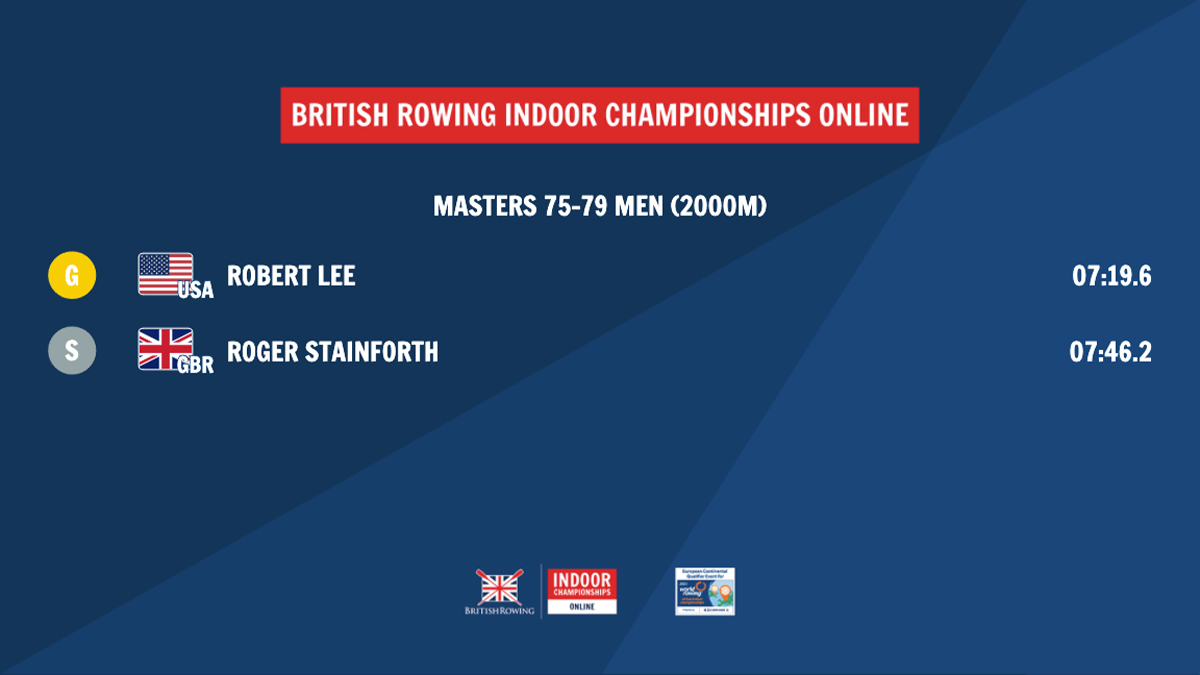 Because of the Coronavirus pandemic both events took place online with entrants competing from home using ergos in living rooms and garages with monitors connected to a computer to enable streaming of races in real time via the internet.

Roger explains the challenges of lockdown –

“Indoor rowing championships this year since lockdowns started in March have been virtual and online instead of in live venues. Fortunately, we have a Concept 2 model C with a PM4 monitor at home and training has not been too great a problem. Not going into the club gym and seeing other people has been unusual but not as odd as being seated on the ergo at home in Durham, DH1 3TF waiting to start a race.”

“The Scottish Rowing IRC on 21 November Men’s 70-79 Heavyweight was my first virtual event. Preparation on the day felt strange until the start procedure began, the countdown SIT READY, ATTENTION, ROW transformed the race feeling as authentic as a real live race.”

Although not taking place at the usual venue at the Lee Valley VeloPark in London the 2 days of ‘LIVE’ real-time BRIC competition attracted a record 2,520 entries from 42 countries. As an added attraction this year there was a BRIC League over the week of November 30th to December 6th, open to anyone to submit their ergo times online, providing an opportunity for those not entering the Live weekend to see how they stacked up against the rest of the world.

The Live event also acted as the European qualifier for the World Rowing Indoor Championships (WRICH), to be held online between February 23rd and 27th 2021.

Competing in the 75-79 age category over 2km Roger was up against very strong opposition in the shape of Robert Lee from Cambridge Boat Club in the USA, who took an early lead and sustained his form to win in a time of 7.19.6 against Roger’s 7.46.2.

He explains, “Any chance of a quicker time was scuppered by a cold so I rowed very carefully to post a qualifying time, 7.46.2 for WRICH.” 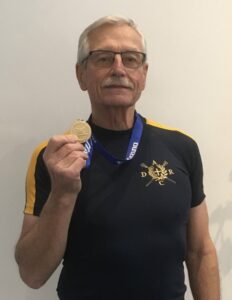 Roger with the gold medal from BRIC 2019

Feeling under the weather Roger opted to withdraw from the 500m sprint on Sunday and will be disappointed not to continue his winning streak.

You can watch back Day 1 of BRIC here and Day 2 here. Time Team have provided complete Live results. 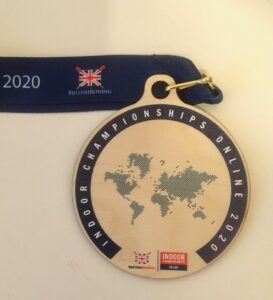 Roger received his lightweight wooden medal from British Rowing in the post, closely followed by the even more exciting news from World Rowing that his 2k time, though far from his best, has been accepted for automatic qualification for the WRICH in February, where he will represent Europe in the 75-79 2k event.

“I feel like Buzz Lightyear…..next year the worlds…then infinity and beyond!!”.

Under normal circumstances the World Championships takes place at a different location each year. Roger won a bronze medal when it took place in Paris last February. However, because of the pandemic and the likelihood of travel difficulties and the need for social distancing FISA (World Rowing) announced in May that, in order to ensure fair competition and access for competitors around the world, the 2021 Championships would be a live virtual event and that for the first time there will be qualifying rounds.

For anyone not selected through the Continental Qualifiers there is also the opportunity for up to 10 additional competitors per event to qualify through the Open pathway by registering a qualifying time before the closing date on February 7th.

Racing at the Scottish Championships in the 70-79 age group on November 21st Roger had outpaced Dutch opponent and World Championship 2k bronze medallist Robin Sterk from ERV Beatrix in Eindhoven in what was a close race up to the final 150m, only to succumb to a stiffer challenge from closer to home, the gold medal on this occasion going to Ian Boyd of Tyne ARC who posted 7.17.3 against Roger’s 7.28.5 (1.2 sec faster than his time for the corresponding event last year). At BRIC Ian competed in the 70-74 event and returned with a bronze medal, finishing in 7.18.3.

Event winners from the combined Scottish and Welsh Championships can be found here.

Robin Sterk went on to win gold medals in the 500 metre sprint event at both the Scottish (70-79) and British (70-74) Indoor Championships.