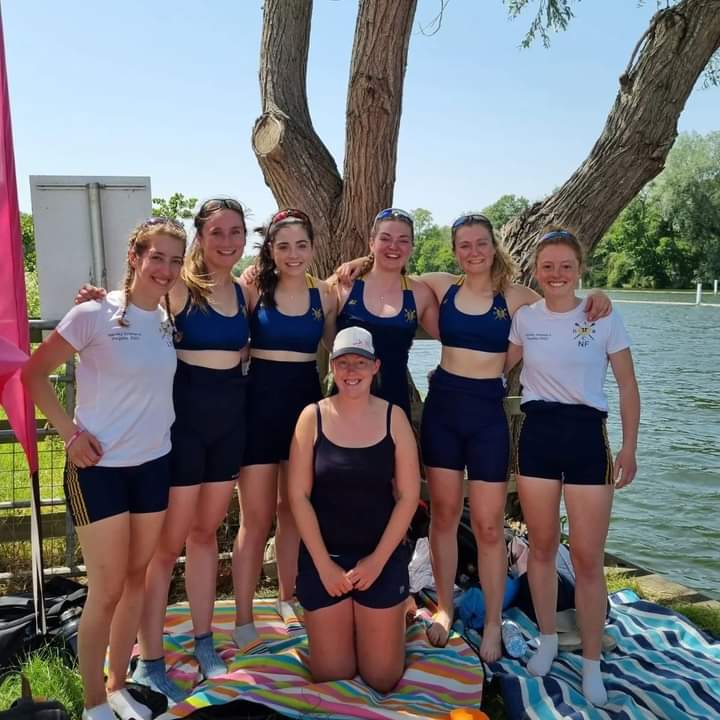 The Senior Women entered two crews at Henley Women’s Regatta over the weekend of June 17th to 19th. This year the premier rowing regatta for women in the United Kingdom attracted a new record entry of over 2000 athletes representing 184 clubs from 8 different countries.

Katie McDaid, Gabrielle Maxfield, Fran Whitfield and Anna Golightly entered the Aspirational coxless quad for the Chairman’s Trophy, and Nicki Fleck and Lily Muskett the Championship Lightweight double sculls for the Haslam Trophy. Both crews are coached by Beth Holmes.

The unprecedented interest this year meant that more time had to be devoted to running time trials in order to whittle down numbers to manageable levels for side by side racing. Organizers had decided to reduce the number of qualifiers for the knock-out phase of Junior events from the usual 16 to 12, meaning that more crews than usual were eliminated before reaching the knock-out stage. Entries for Championship events were however guaranteed at least one side by side race.

Qualifiers from time trials for each event went forward to heats on Friday evening, quarter finals on Saturday, and semi-finals and finals on Sunday.

Unlike Championship events Aspirational events are intended for women who have not been selected for any international competition or won a medal at any major championship in the past 5 years. 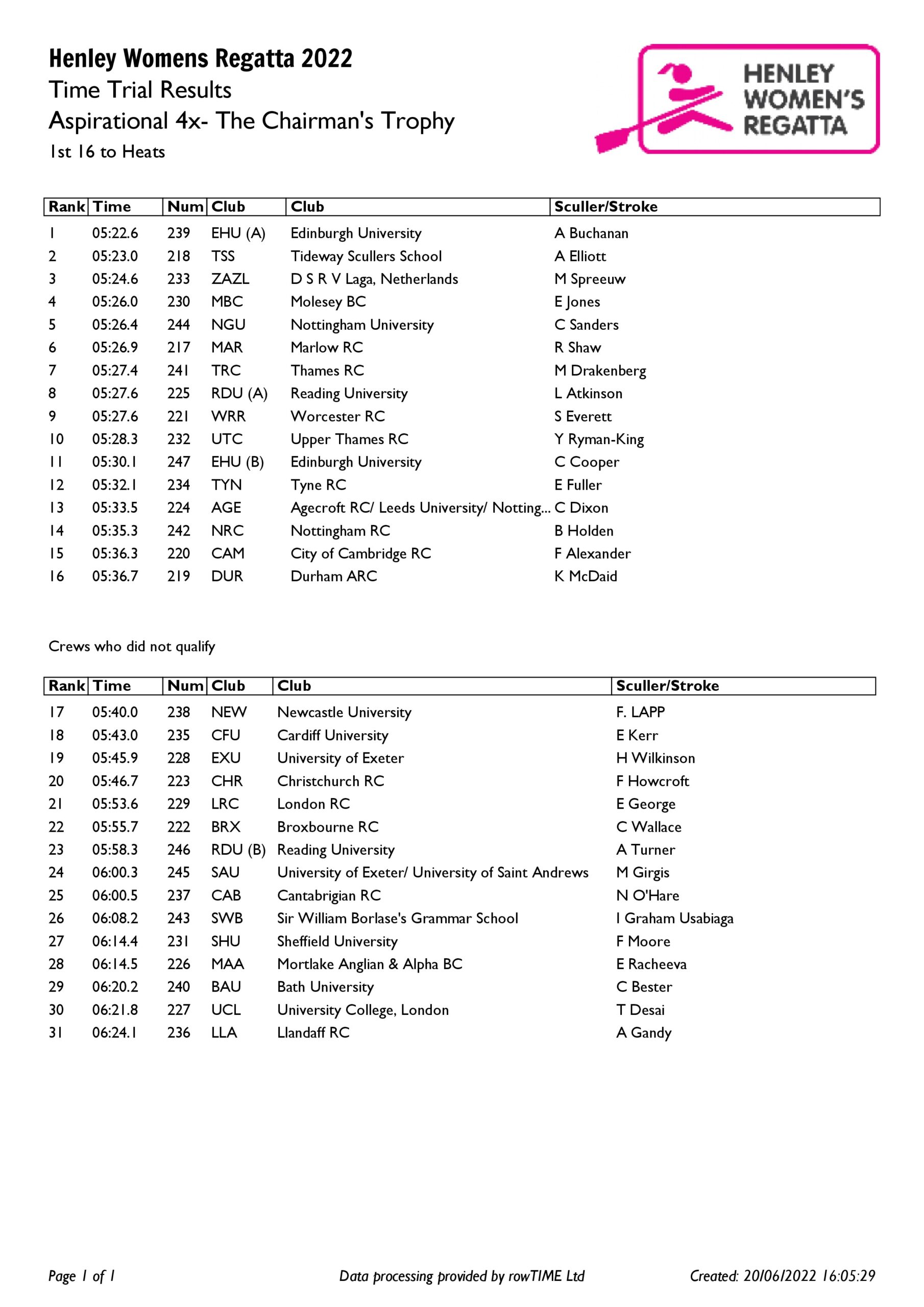 Durham ARC’s 4x- performed brilliantly in the Friday morning time trial to emerge from a field of 31 as one of the 16 fastest qualifiers, which put them into a heat raced over 1500 metres of the famous Henley reach against Marlow Rowing Club on Friday night, but they were unable to progress further. The event winners after Sunday’s final were Edinburgh University Boat Club.

Competitors in Lightweight crews are required to have an average weight of no more than 57kg. DARC went through as the sixth fastest qualifier from the Friday time trial for the Championship Lightweight 2x, and with Newark RC eliminated from the original 9 entries a cosmopolitan line-up of eight qualifiers went forward to the quarter-finals the following day, including the DARC double and Reading University BC from the UK, plus entries from Australia, New Zealand, Canada, Ireland and Germany. 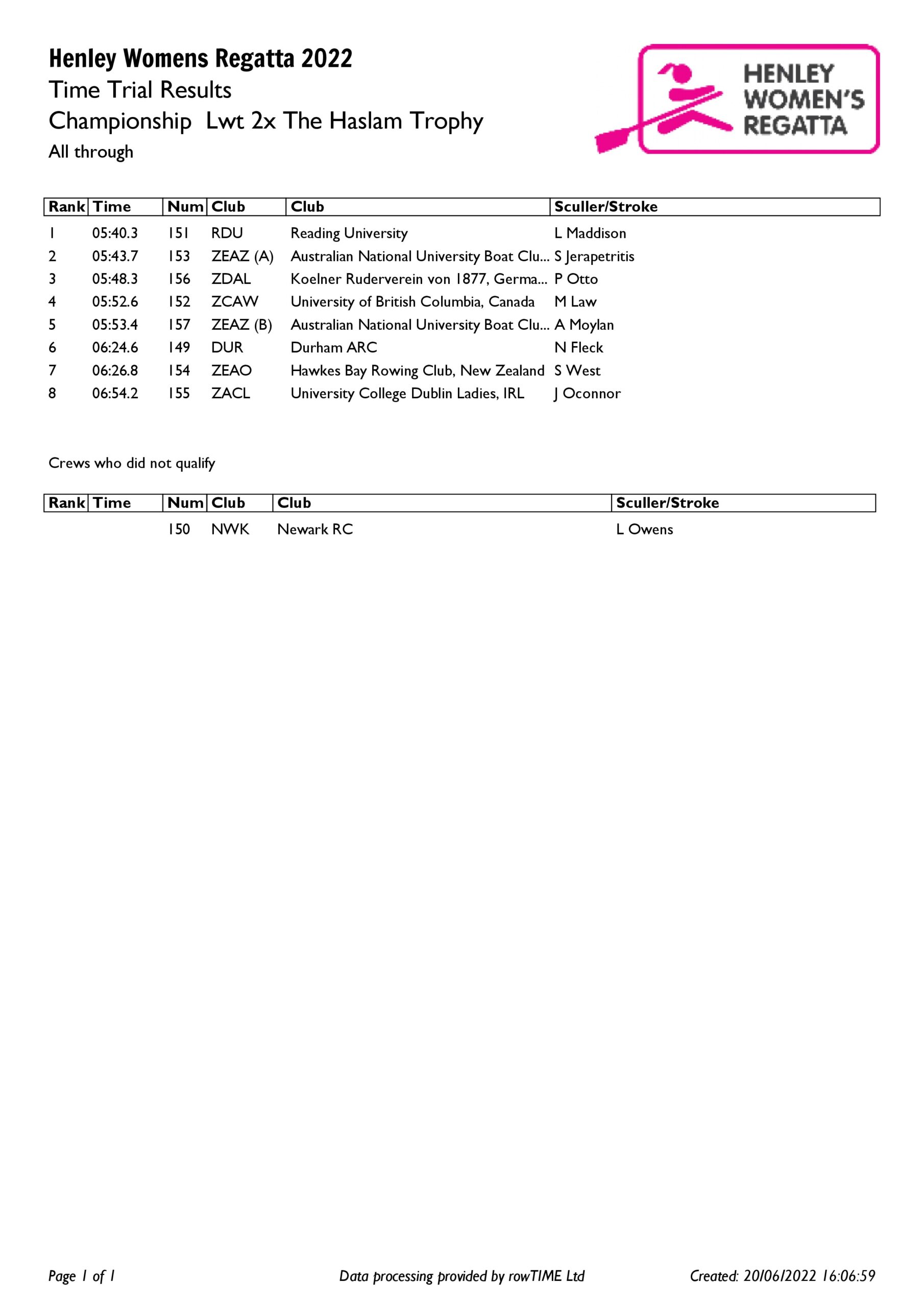 In their quarter final on Saturday the DARC pair were no match for a vastly experienced Australian composite pairing representing the Australian National University Boat Club and Huon Rowing Club, Tasmania, and sadly were knocked out by the crew who went on to be the eventual winners of Sunday’s final.

Crew photos from AllMarkOne are here and here and livestream footage is available on YouTube.

Congratulations to everyone on being part of the biggest Henley Women’s Regatta of all time.