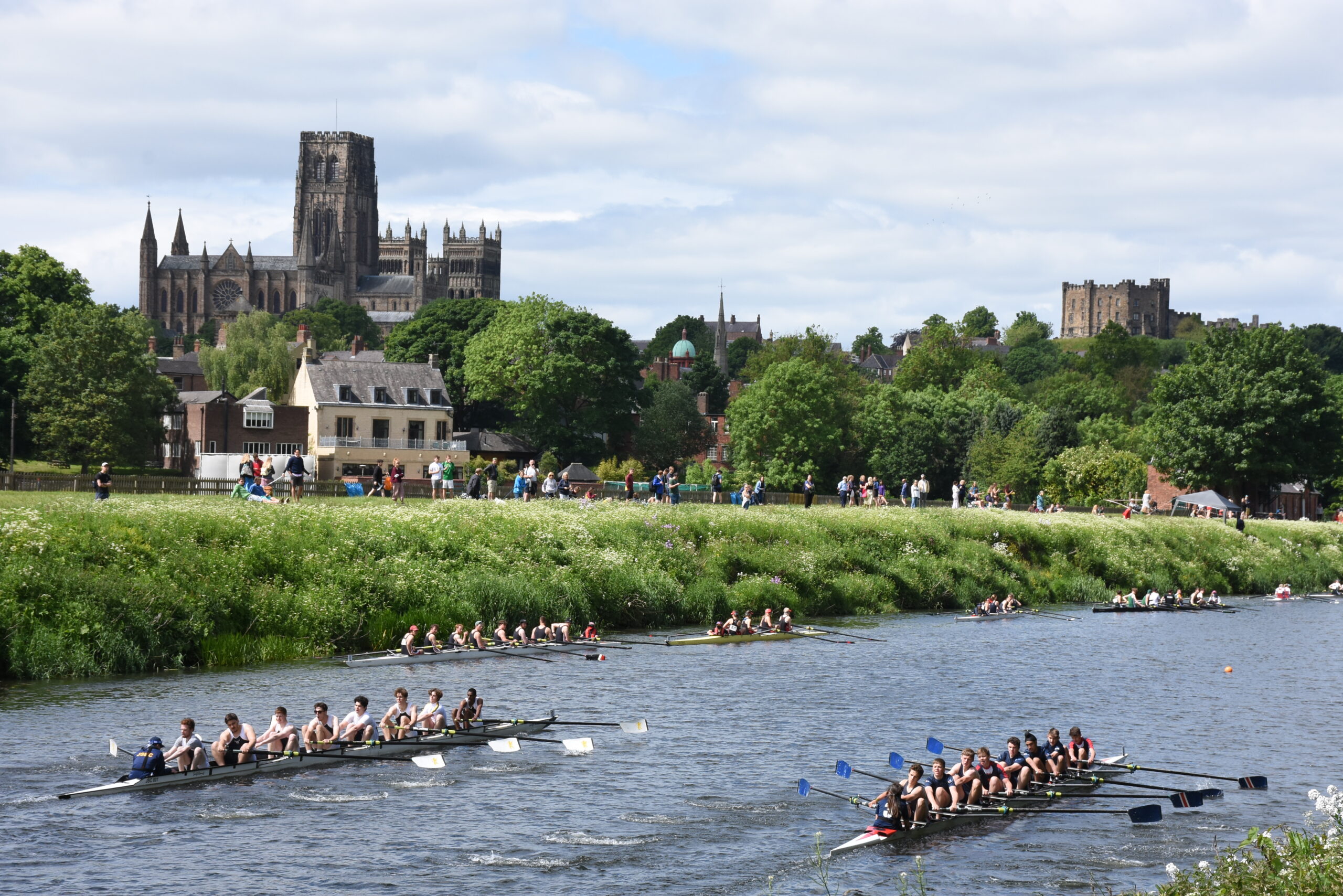 Midway through the 2022 regatta season entries for Durham Regatta have opened and some relative normality has returned.

Locally the summer season commenced on April 9th with Chester-le-Street Regatta taking place for the first time in 4 years, albeit without an entry from DARC. A successful day of 95 races over a 900 metre course was followed a month later by two full days of racing at Durham City Regatta that attracted 60 entries from DARC.

Tees Regatta on May 14th took place over 850 metres on the 4-lane buoyed course on the River Tees, the only multi-lane course in the Northern region, finishing in front of the River Tees Watersports Centre. In order to make best use of the time allotted for river closure by the Canal & River Trust, organisers decided that all events would be finals and banded entries to provide 118 races and ensure no more than 4 entries per event.

A successful day it proved to be for DARC with wins in 8 events, second place in 5 and third in 3, the wins being achieved by Rachel Terry in the Women’s Masters C single sculls, Nicki Fleck and Lily Muskett in band 1, and Lucy Chamberlain and Ella Williams in band 2 of the Women’s double sculls, Olivia Bothamley-Dakin, Charlotte Carter, Emily Chaytor, Rachel Wilson and cox Aine Widdicombe in band 2 of the Women’s coxed four, Isaac Bolton, Will Terry, Joe Kennedy-Wharton and Ben Cardy in band 1 of the J15 coxed quad, Michael Terry in band 1 of the MasD single, Anna Golightly, Fran Whitfield, Gabby Maxfield and Katie McDaid in band 1, and Ash Carter, Lucy Beresford, Maia Benstead and Milly Rainford in band 2 of the Women’s coxless quad.

The J15 boys split into two doubles and finished second in both band 1 and band 2 of the J15 2x. Joyce Collett was second to Tees in the WMasG 1x, Kim Forster and David Muse were second to Lakeland in the MasC 2x, and the MxMasG 8+ was second to Bradford. The Senior Men’s eight was up against strong opposition and finished third to Leeds University, as did the Men’s pair, and Aisling Dutton and Gabrielle Moore were third to Talkin Tarn in the WMasE 2x. Tees Regatta results can be found here.

The following weekend saw two entries racing over 800 metres at Wansbeck Regatta and another over 2000 metres on the 6-lane course at the National Watersports Centre at Holme Pierrepont in Nottingham City Regatta on May 21st.

The MasE 4x- of Peter Robinson, George Peattie, Dave Murray and Gary McCarthy overcame opposition from Chester-le-Street and Hexham to win their event, while the WMasH 4x- of Caroline Scholl, Hazel Stainforth, Carolyn Edwards and Lynn Pain were in a Women’s 4x- event, winning the semi-final against a Hexham crew but losing in the final to a Hexham/Berwick composite who had beaten St Leonard’s in their semi-final.

Indications are that smaller scale river regattas remain popular although there has been a tendency in recent years for multi-lane regattas to dominate, with Nottingham City starting a sequence of events at the National Watersports Centre, Nottingham and Dorney Lake over the coming weeks –

followed closely by the Henley Regattas – Henley Women’s Regatta on June 17th to 19th, Henley Royal Regatta on June 28th to July 3rd, and Henley Masters on July 8th and 9th – before a return to Nottingham on July 15th to 17th for the British Rowing Junior Championships.

Durham Regatta on June 11th and 12th has the misfortune to have to compete for entries with the Masters Championships with the two again being scheduled on the same weekend. However, athough athletes aspiring to compete at Henley may at other times be attracted towards the multi-lane competitions Durham retains its appeal.

DARC has had entries at Henley Women’s and Henley Masters Regattas on a regular basis over the years but rarely at Henley Royal, notable exceptions being 1995 and 2009.

The Northern regatta circuit continues with Hexham Jubilee Regatta on June 4th, and rounds off with Tyne on June 25th and Talkin Tarn on July 2nd.