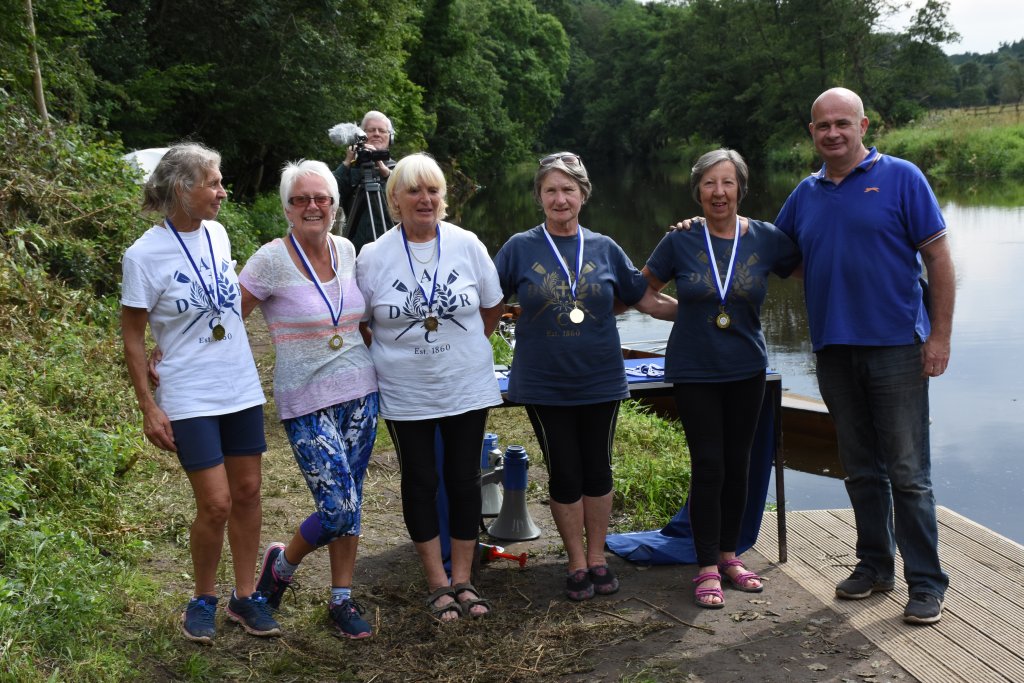 Competitive rowing returned to the River Derwent at Ebchester in County Durham on August 4th after an absence of 45 years when the sixth round of the Sunday League was hosted by the recently re-formed Ebchester Boat Club.

Set in idyllic surroundings the River Derwent has been used for rowing since at least 1872 and after the construction of its first boathouse in 1878 Ebchester Amateur Rowing Club became an important part of village social life for both young and old, and regattas were well attended, particularly in the years immediately following World War II. Sadly a decline in the popularity of rowing in the 1960s and 70s led to the club being dissolved in 1974, after which time the boathouse fell into a state of dereliction. 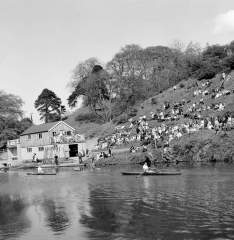 Ebchester is situated on the site of the Roman fort of Vindomora, which guarded Dere Street where it crossed the River Derwent, Dere Street being the main route for bringing supplies from York and the south to the forts on Hadrian’s Wall.

The Ebchester Village Trust was formed in 1976 with the objective of improving the Ebchester environment. Thankfully the boathouse was saved from demolition, and in 1981 was brought back into use by the 5th Tyne Sea Scouts who used the river for canoeing and kayaking.

The Ebchester Boathouse Development Partnership was formed in 2011 and on completion of repairs to the storm-damaged weir set about securing the future use of the boathouse. The boathouse and the river environment are recognised as a great asset to the village and one of the aims of the Partnership is to revive the boathouse as a focal point for community activity.

After much endeavour involving numerous agencies including Durham County Council and the Environment Agency, recovery from flood damage and the repair of a culvert on the Ebchester Burn, planning consent to rebuild the boathouse was granted in 2018 and it is hoped that work can commence once sufficient funds are available. 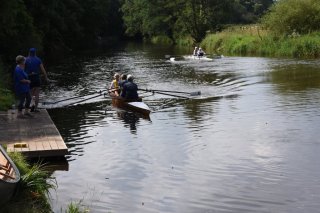 A sculling group was created to which members of neighbouring rowing clubs were invited as a means of generating interest in the use of facilities ideally suited to social and recreational rowing as well as for developing skills, and as a means of attracting investment.

In 2019 Ebchester Boat Club was reconstituted and affiliated to British Rowing. A number of boats were donated to the club, including 2 coxed doubles from Bradford ARC and a single scull from Berwick ARC, allowing rowing to return to the River Derwent. Links have also been established with the nearby Derwent Reservoir Sailing Club. Membership of the club is as yet very limited but it is anticipated that numbers will grow following a series of learn to row courses being staged this summer.

The development project is being co-ordinated by Mick Downworth who also rows with the Masters squad at Durham Amateur Rowing Club, with help from the Ebchester members and community, and aided by members of other clubs from the northern region and beyond.

In a bid to bring about a return to competitive rowing Mick proposed Ebchester as a location for one of the rounds of the Northern Rowing Council’s Sunday League competition and was allocated the vacant slot for round 6 in August. The Sunday League is a fun competition aimed at novice and recreational rowers, and consists of 8 monthly rounds at different venues, normally contested by crews using coxed quads and fours, but due to the limited space available at Ebchester it was decided that a timed relay race in coxed and coxless doubles would be more suitable.

Now in its eighth season the Sunday League is organised on behalf of the Northern Rowing Council by Colin Lawson of Durham ARC and Colin Percy of Tyne ARC, who carried out trials in July to establish a format that would work on the course at Ebchester. 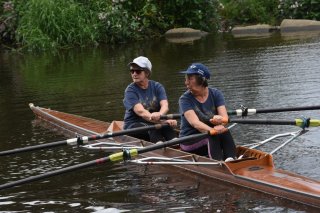 It was also determined that as well as the Sunday League element the competition would be styled Ebchester Regatta to evoke memories of the regattas of yesteryear, and that it would include timed sprint races open for anyone to enter, over the 200 metre course.

Entries were submitted from ten teams of 4 (plus a cox) for the Sunday League relays. Additional entries from single and double scullers for the sprints, both in advance and on the day, and including many of the Sunday League competitors, amounted to a further 26. 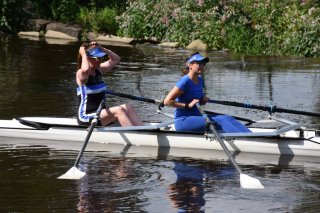 The site was prepared, the Victorian terraces were cleared and refreshments provided for the anticipated spectators, while Tyne ARC kindly loaned their two stable doubles for the day which were delivered by Colin Percy. A fabulous four hours of convivial and friendly competition ensued to the delight of the assembled onlookers.

“One of the best days this year,” remarked Kerry Jordan of Tynemouth RC. 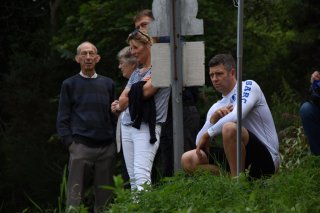 Among the spectators was 88 year-old Alan Beveridge who has enjoyed much success on the northern racing circuit over the years and now sculls with the Talkin Tarn recreational rowing group. Alan very kindly brought along the magnificent trophy presented to the former Ebchester Amateur Rowing Club in memory of his father James Beveridge. Alan won the trophy with Ebchester in 1949 and 1959. The Beveridge Cup was duly donated to Ebchester Boat Club to be presented to the fastest sculler of the day.

“Lovely to see the old trophy back where it rightly belongs! Alan and I thoroughly enjoyed our visit on Sunday and it brought back happy memories. Good luck Ebchester ARC – may you go from strength to strength.” said Alan’s wife Enid. 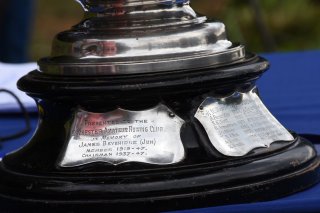 The Sunday League relays involved a coxed double scull making a return trip over the course before a coxless double repeated the process for the second leg, to complete 800 metres in total. For fair competition racing was divided into under-50 and 50+ age groups, and total times recorded. Tynequila of Tyne ARC held off Ebchester by 2 seconds to win the open under-50 race in 5 minutes 42 seconds, Wrecked Again (Tees RC and Durham ARC composite) won the open 50+ event in 6.00, Tynemouth Gulls won the women’s under-50 in 7.16 and ‘Ebby, Steady, Go!’, consisting of Margaret Richardson, Maureen Miller, Gene Dobson, Shirley Robinson and cox Caroline Scholl (in photo above with Mick) of Durham ARC won the women’s 50+ race in 6 minutes 35 seconds. 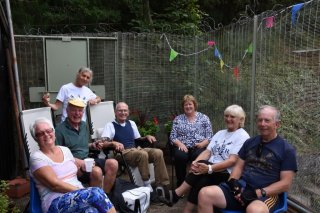 Spectators were then treated to some top class sculling in the sprint competition with Jamie McCarron of Cambois and Chris Eke of Berwick winning the open double sculls in 42.15 seconds, before both contested the open single, each completing the 200 metres in under 40 seconds, and Jamie claiming victory in 39.19. Lee Fenton of Berwick won the women’s single in 47.80 and she and Susan Rutherford the women’s double sculls in 54.66 seconds. 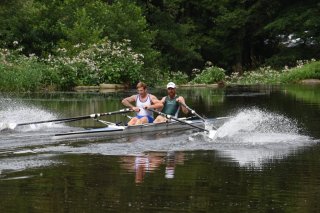 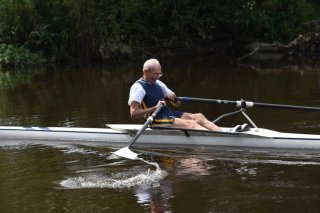 Among the competitors was 78 year-old Clive Hole of Durham ARC who also took part in the last Ebchester Regatta held in 1973. 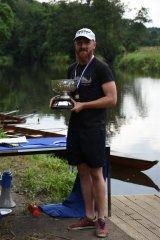 Medals were presented to winners in each category, the Ebchester Cup went to Lee Fenton for the women’s single sculls and the Beveridge Cup was awarded to Jamie McCarron for the open single sculls. 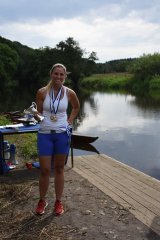 Mick Downworth thanked the organisers on behalf of the club and the community, “Huge thanks for helping make the regatta at Ebchester happen, the feedback we have had is fantastic and the locals are thrilled to bits to have the event back for the village and the Derwent Valley.”

Noel Adamson has compiled video highlights of the day – part 1 and part 2.

Visitors are invited to come and use the club’s boats and have a BBQ in exchange for a donation of £3 per person for upkeep. The club has already hosted groups from rowing clubs including Hexham, Gateshead, Tynemouth, Durham and Tyne. 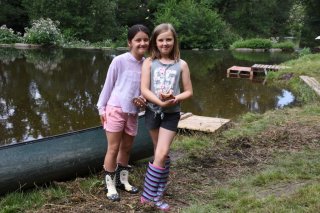 Andy Jaggard of Durham ARC is also offering a series of sculling programmes based at Ebchester, Durham and Derwent Reservoir, and there are plans for the River Derwent to be used as a location for junior members of clubs in the region to develop sculling skills in preparation for the exercises they are required to carry out at the British Rowing Junior Championships.

The Sunday League continues at Talkin Tarn on September 1st and Tyne United on October 6th.

For further details about how to join Ebchester Boat Club please email ebchesterbc@gmail.com 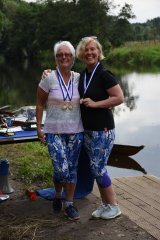 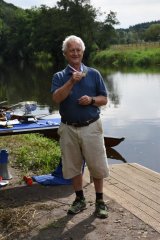