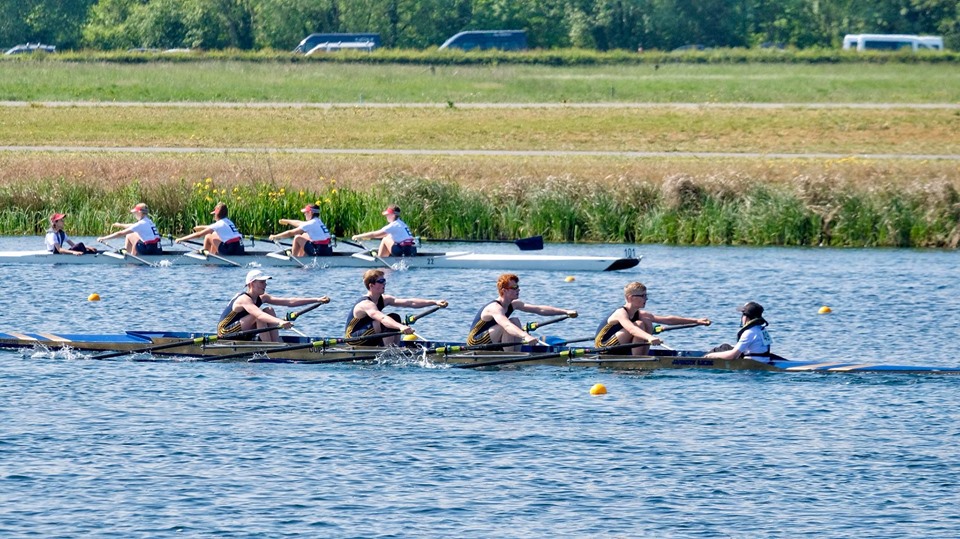 Durham ARC had 4 entries in the National Schools’ Regatta (NSR) at Eton Dorney over the weekend of May 24th to 26th. The event is the biggest of the season for parents, coaches and Junior squads representing schools and clubs around the United Kingdom who have been training hard all year.

Established in 1947 it now takes place at the 2012 Olympic Rowing venue and attracts around 5000 competitors aged 14 to 18 each year. National Schools’ Regatta is a charitable trust run by a committee of volunteers and is a not for profit event.

Chairman, George Hammond and his committee are supported by over 100 NSR volunteers.  The team come from within the sport of rowing and the local community of Windsor and Slough. “NSR could not operate without the time and energy given so generously by every single volunteer” he pointed out.

As well as the racing, the NSR is all about parents, coaches and volunteers working together with their athletes in a supportive environment. There was even a Best Marquee Competition this year!

Competition takes place over 1000 metres for J14 and some J15 races on Friday, while J16 to J18s race over 2000 metres on Saturday and Sunday. Where numbers are appropriate time trials precede semi-finals and finals on the 8 lane course.

First to go for DARC was the youngest crew, the J14 girls coxed quad of Jennifer Napora, Tilly Stoddart, Libby Morris, Orlagh Windle and cox Francesca Suggett, who finished 6th fastest out of 50 entries in the time trial on Friday morning and qualified for the A final on Friday evening where they were also 6th, the highest placed DARC crew of the weekend.

Next was the J15 boys coxed quad (in photo above by Ian Suggett) of Lewis Davison, Thomas Crabtree, Jacob Windle, Ellis Black and cox Thomas Woods who were 5th fastest in their time trial and went into the A/B semi-final on Friday afternoon, where they finished in 4th place, qualifying for the B final where they were placed 5th.

On Sunday Adam Morris was one of 66 entries in the Championship single sculls contested over 2000 metres for the Sculls Cup, finishing 43rd in a very strong field in the time trial.

Everyone performed to the best of their ability and did themselves and the club proud.

Results for DARC are on the Time Team website, where results from all races can also be found.