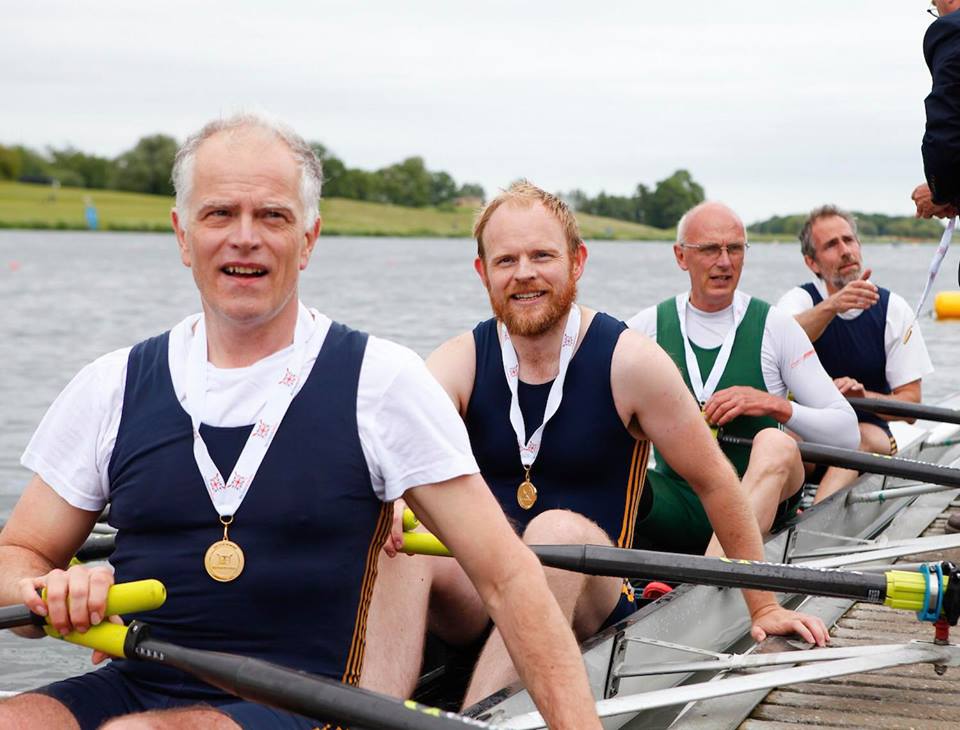 DARC Masters were out in force at the British Rowing Masters Championships held at the National Watersports Centre at Holme Pierrepont on June 10th and 11th, the same weekend as Durham Regatta, returning from Nottingham with a good haul of medals.

This year’s Championships was the biggest ever, with 940 entries from 140 clubs, showing the strength and depth of Masters rowing across the country. The new British Rowing competition framework meant that instead of the Novice and Intermediate levels used in previous years, non-championship events were categorised into bands according to ranking index to ensure closer racing. 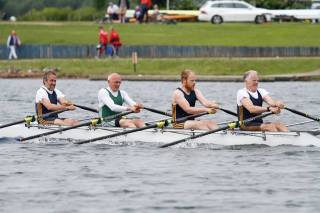 With Gill Prescott unavoidably away there was a win in the Women’s Masters E coxless quad for a reorganised crew including Eva Rankin with a composite from Exeter, Wycliffe College and Upper Thames Rowing Clubs. 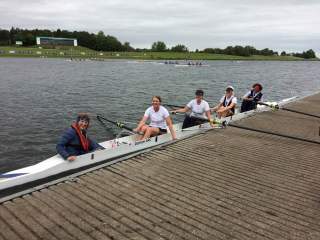 A more unexpected win came in the Women’s non-championship Masters D-F coxed four, the crew of Jacki Patrickson, Clare Woodward, June Davison and Susan Jackson, coxed superbly by Helen Adair, coming from behind to overtake 2 opponents in the last 250 metres in a very exciting race. The same squad entered a Masters A-C 4+ combination, this time Aisling Dutton replacing June Davison, and did well to take 2nd place behind a much younger crew from Lea RC.

Joyce Collett competed in Championship F single sculls as there was no competition in G 1x. She had an excellent scull winning a bronze medal, only a couple of lengths behind the winner. Had she been competing as F/G 1x with several seconds start she would certainly have won gold.

There was also a silver medal in difficult conditions against a strong headwind for Andy Jaggard in Masters G single sculls.

On Sunday crews faced horrendous conditions. The Women’s Masters E eight (Sarah Rutter, Kim Forster, Hazel Stainforth, Christine Heppell, Helen Adair, Gabrielle Moore, Sam English, Angela Lund and cox Andy Jaggard) had to wait at the start as their opponents from Marlow spent several minutes broadside on while attached to the stake-boat. When they finally got straight the DARC eight had the better start taking half a length lead. The bigger Marlow crew then rowed through taking a 1 length lead, but with a push at 500 metres and another at 250 metres the DARC eight battled back, taking the silver medal, only losing by around 1/3 length in a gutsy performance. 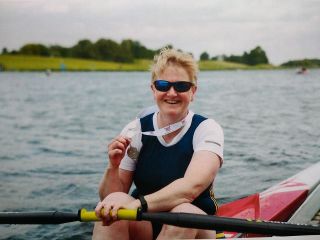 Soon afterwards, at around 2pm on Sunday, racing was abandoned because of worsening wind and water conditions, which meant the remaining DARC entrants, including the men’s and mixed eights, were unable to race.

Because insufficient races were completed there was no Victor Ludorum Award for the most successful club overall, but DARC was given the accolade of ‘Club of the Day’ by British Rowing after the performances on day 1.

All the results from the weekend can be found here.