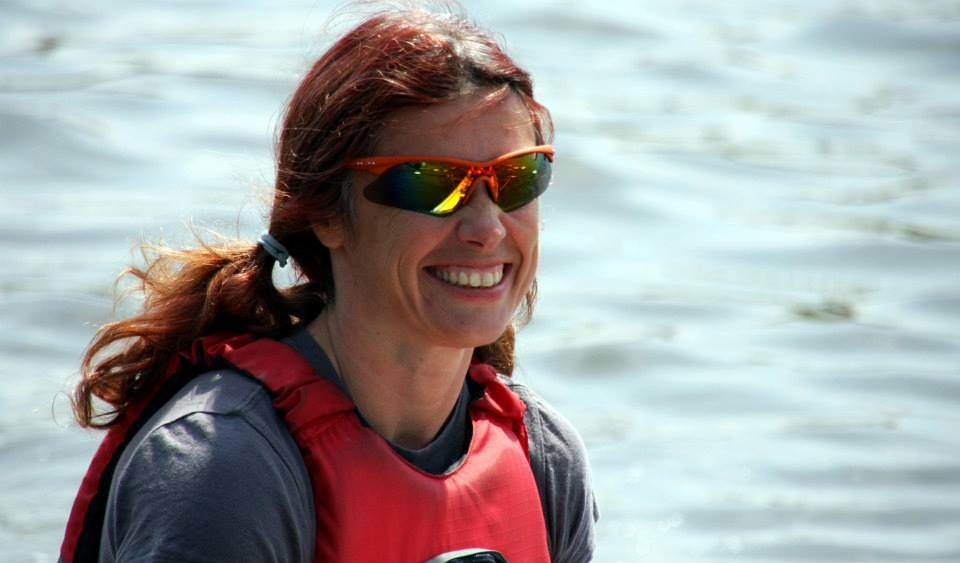 Jacki Patrickson is DARC’s coaching co-ordinator. A civil engineer and mother of two, her first job as a graduate, was spent building roads and bridges around Durham (I have it on good authority that she is particularly fond of culverts).

When I first moved to County Durham in 1990, I lived 4 doors down from Helen McDaid and always loved listening to her rowing stories. When I moved back, I had some time off work and decided to come and join the rowing club. In the past, Helen and I had done several sports together (and she always beat me). Now she’s given up … so maybe I can finally beat her! Its also been lovely to have Helen’s daughter, Katie (a talented sculler), coxing us and also seeing how successful she is being. McDaids are Oarsome

De-novicing last year at Durham regatta .. because I felt I rowed well, and it was my first experience of a regatta. I also spent one day driving the rescue boat, (luckily mainly sitting in the sunshine and cheering everyone on!) so felt really involved and proud that Durham Rowers put on such a fabulous event.

Thankfully I’ve been well supervised so far and don’t have a printable moment to share, however, I am growing increasingly concerned about the number of photographs being taken of me with my tongue out whilst rowing.  Definitely need to sort that out before Rio!

Have someone in the squad who is better than you, so that you’ve got someone to chase – it motivates you to work harder

Ferrying children to football (I manage my sons team) and organising bike rides for women through British Cycling’s Breeze Network. I’m very passionate about getting more people to cycle, I’m also organising a sea-to-sea bike ride for 16 women, many of whom couldn’t cycle more than 10 miles on the flat last year. Very proud of them all

Tell us a rowing joke

Would be that everyone in the club has the opportunity to compete at the level that they have the potential for .. and that the sun shines every day ..

and the river is always at the right level .. and it’s not windy for the rest of the year .. and it’s just me sculling down an empty river .. sorry Jacki .. carried away

I don’t like whinging. I like resolving things, which is why I’ve taken on the role of coaching co-ordinator .. mind you it would be nice to have some better bike racks at the club.

Why did you take on the coaching role? And what are you hoping to achieve?

I did it because I didn’t feel there was enough coordination of coaching across the club. I wanted to see what I could do about that .. and thought I had some useful skills to bring. It’s not proving as easy as I had hoped, however I’m making some progress and am focusing on streamlining the Learn to Row and induction programmes into the club.

A big big thank you to Mark French for stepping in and providing coaching for the Womens Dev Squad and also to all the other coaches who put in so many hours for squads across the club.

Over the next few months I will be organising a cox development programme, as well as setting up a Learn to Row course for disabled rowers.

We also want to target new members in the 18-30 age range and I’ll be working with both Senior Mens’ and Womens’ Squads to look at how we can attract these.

All of this will take more than me to deliver, so I’d really like volunteers from all the squads to come help on these courses. It’s a new rowers first view of the club and very important that we demonstrate our professionalism and coordination.

Thanks Jackie. By the way, how do you spell your name .. someone told me you’re a bit OCD about e’s?

Yes I am, I think it’s very disrespectful not to pay any attention to people’s names!!!

It’s certainly not spelt the way it is on the Photo board .. and someone told me it would be changed 2 months ago

Apologis Jacki, I’ll mak a not of that and gt some tippx –

You did say that you had ordered another name tag Andy!!!!