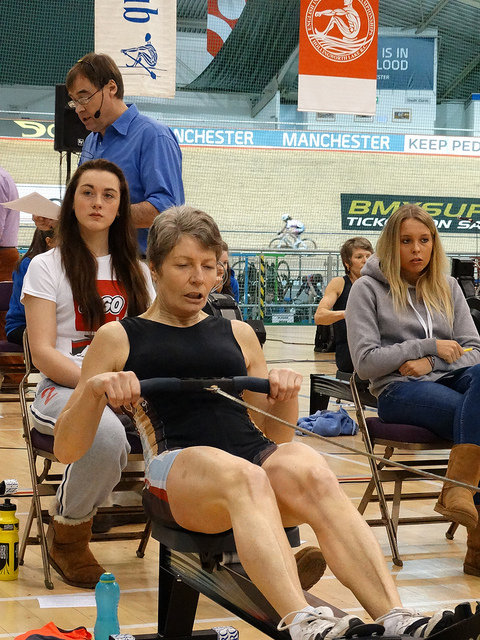 2014 looks set to be another golden year for DARC super rower, Gill Prescott. Gill, who recently won the North East Sporting Inspiration of the Year Award 2013, broke her own world record for the 55-59 age group at the English Indoor Rowing Championships in Manchester on 3rd March.

Gill took 1/10th of a second from her previous time to complete the 2k trial in 7.20.1.  Later in the day, she also won Gold in the 500m sprint. Commenting that she could have done a better time but was “a bit tired after the 2k” She went on to her thank her coach, Geoff Graham, for his dedication in ensuring she continues to improve her world beating times.

DARC Chairman, Martin Judson, said “Gill is now the most successful rower the Club has ever produced and we are all incredibly proud of her. Another world record is an amazing achievement and it goes to show that you can excel in sport at any age”.

Durham Amateur Rowing Club is currently running Learn to Row courses for adults as part of County Durham Sport’s, “Move into Sport” programme and hopes to attract a broad range of abilities to join its men’s and women’s squads rowing at all levels in the UK and internationally. Later this year DARC will also launch a Rowability course aimed at encouraging people with disabilities to take up the sport.

Further information on the English Indoor Rowing Championships can be found here: http://www.concept2.co.uk/news/

Further information on DARC’s Learn to Row courses can be found here: https:/www.durham-arc.org.uk/thinking-of-rowing/explore-rowing/