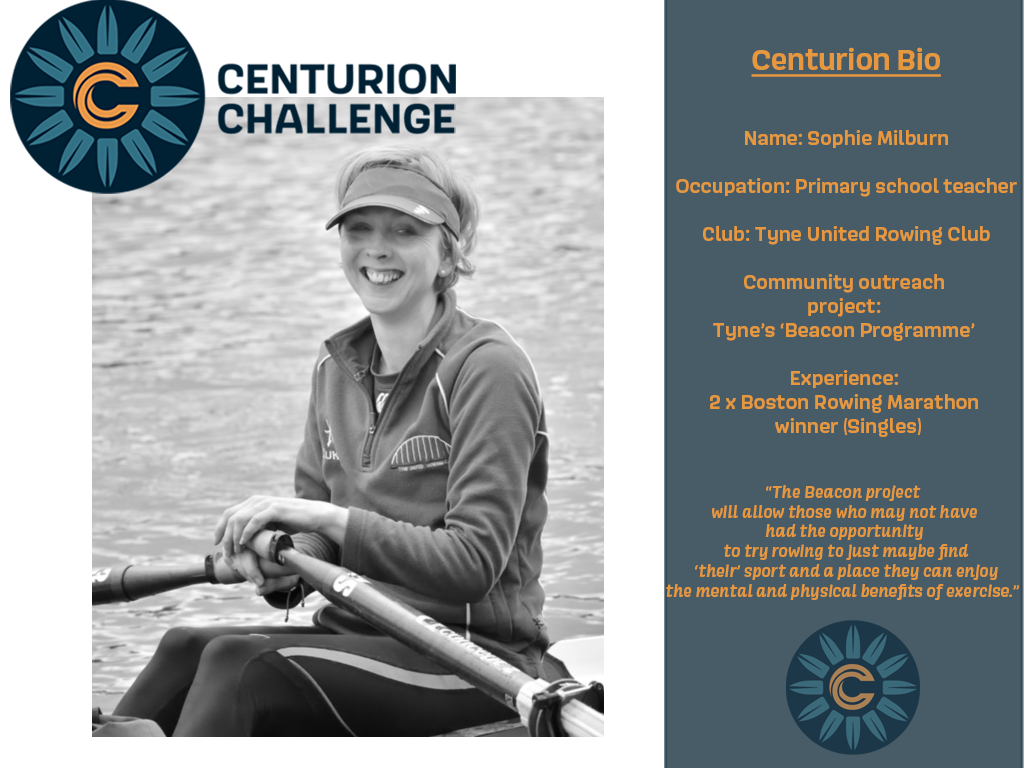 The inaugural Centurion Challenge takes place on Sunday, September 12th 2021 at rowing clubs across the UK. This new community project will be an annual event celebrating the transformative impact of rowing. It has been brought about by London Youth Rowing and is the brainchild of three times Olympic Champion Andrew Triggs-Hodge.

Each year up to 12 rowing organisations can nominate a candidate to be a ‘Centurion’. On the day each of the Centurions will attempt to row 100km to raise money for a rowing outreach programme of their choice in their local community.

The Centurion Challenge is not a race, it is a commitment to support your local community by doing something extraordinary. The real winners are those who benefit from the programmes we help fund.

The Challenge was inspired by Lucy Radley of Tees Rowing Club who took up rowing 15 years ago as a means of slowing down the effects of MS. Lucy quickly became hooked and after winning the inaugural Sunday League set about training for long distance challenges which she does while also holding down numerous volunteer roles for her club. She has set several course records for the 50km Boston Marathon in her para single and is a veteran of the Ringvaart 100km race in Holland. However, as Covid has prevented either taking place for the past 2 years she decided to complete 100km on June 12th this year by rowing from Boston to Lincoln and back again, while raising money for the Boston Rowing Community Project, and creating the idea of the Centurion Challenge. Andy Triggs-Hodge cycled alongside to support her during the row.

Watch the video of Lucy’s row below

Among this year’s Centurions is Sophie Milburn from Tyne United Rowing Club who is raising funds for the Beacon Project. Sophie is a primary school teacher and took up rowing in 2012 after being inspired by the London Olympics. She has since won the Boston Marathon twice in her single. The Beacon Project will allow those who may not have had the opportunity to try rowing to enjoy the mental and physical benefits of exercise.

As well as sculling in her single Sophie will be accompanied on her 100km row by other members of the TURC Masters squad who will join her in crew boats for 10km stints throughout the day. One of them will be Joyce Collett from Durham ARC who also rows on the Tyne. Joyce took up rowing around 10 years ago just before her 60th birthday. After starting out in the Sunday League she has twice won gold medals at the British Rowing Masters Regatta in her single as well as at the British Rowing Indoor Championships. Now approaching her next significant birthday, she continues to give great inspiration to everyone in the club.

You can support a very worthy cause by making a donation on Virgin Money Giving.