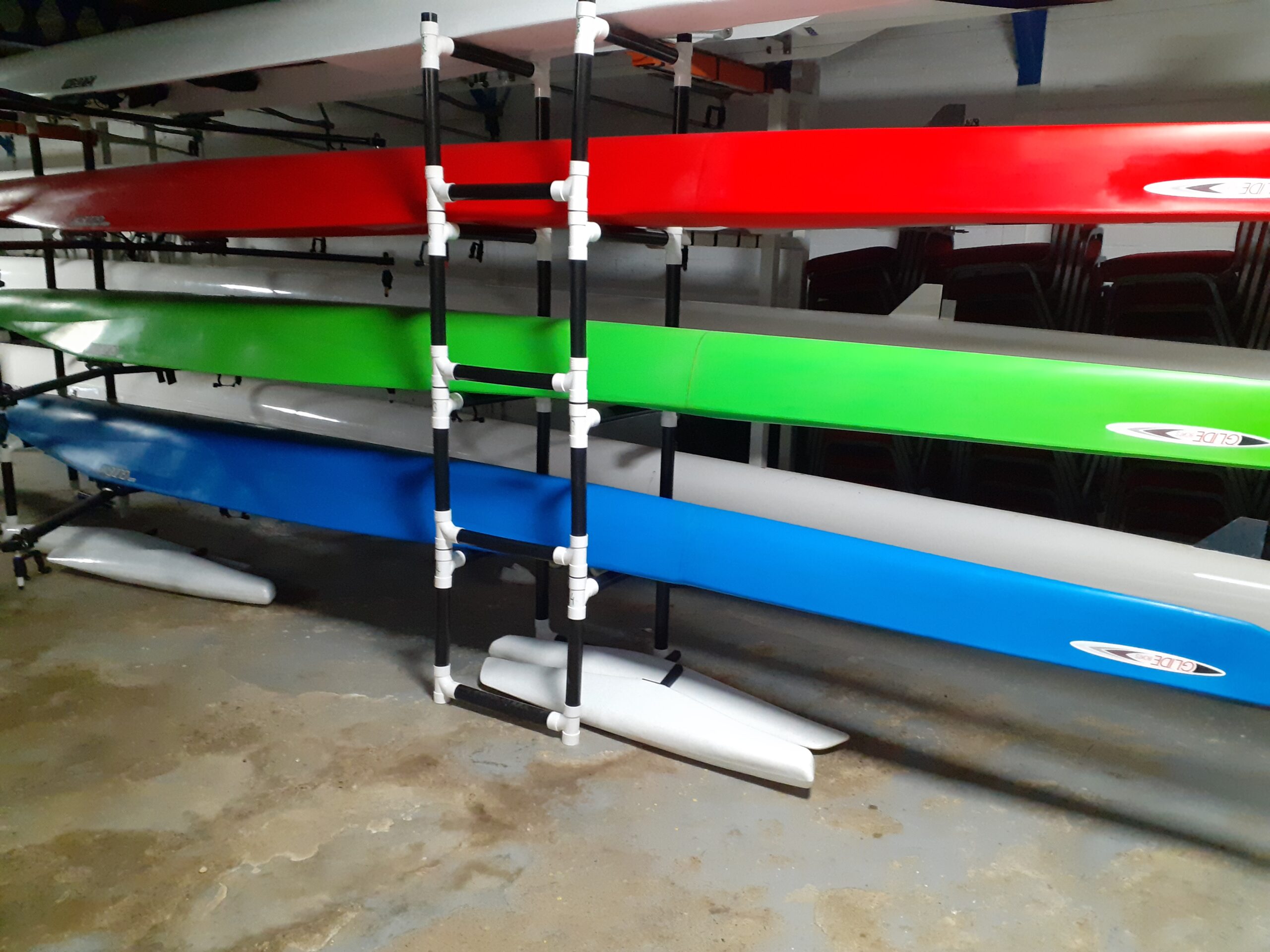 The Club has recently acquired four Glide One single sculls that are ex demo boats available at an exceptionally good price.

The Glide One is a training boat but has the advantage that it has more of the ‘feel’ of a fine single scull. It is durable but also has a design that is as simple as possible, in order to eliminate many of the things that can go wrong with shared club boats.  The boats can act as stable single boats with attached floats or without floats and will replace the current wooden tracers in the boathouse.

With single sculling currently being ‘the only game in town’, these singles will be a valuable resource as a means of developing sculling skills. Long term the boats will also be excellent for our Learn to Row courses as well as for our community sessions. In the current environment we think they will be ideal for several groups – 1) good crew scullers who are less experienced/comfortable in a single, 2) less experienced scullers, and 3) sweep-oar rowers who would like to try single sculling.

This provides an opportunity for more club members to get on the water, obviously within hygiene and social distancing constraints.

Expressions of interest were sought from the Daytime, Masters and Senior sections, and, where possible, interested members were organised into groups of four based on their level of experience. Andy Jaggard is co-ordinating the groups, each of which will have a series of coached sessions at a day and time suitable to the group. Once they gain confidence they will then be able to book the boats together, ideally as the same group of four. The response so far has been excellent and the first 3 groups have been formed and sessions are underway as of the week beginning June 29th.

The response from members to single sculling generally has been very positive, and numbers booking outings in club singles has increased week on week to the extent that over 100 are now able to take to the water each week. Rowing & Coaching have drawn up a weekly schedule of 2-hour time slots based on a maximum of 6 boats per slot, and members are able to book in advance initially one slot per week with additional outings being available should there be capacity. Time slots have been added to the rota on a per squad basis. By gradually increasing the number of time slots available, and with members being respectful to the needs of others, it has been just about possible to satisfy demand from the more enthusiastic members, although there is constant strain on resources. Boat Warden Ray Dominy continues to do an excellent job maintaining the fleet in working order.

Interest in family doubles has been good and many members also continue to scull using private boats. Because of insurance limitations only two club doubles are available at present for use by members from the same household.

There remain many harder to reach groups who have been unable to go afloat for the past 4 months, especially those looking for a more social outing, and everyone is obviously looking forward to more time on the water.

The Glide sculling boats will therefore enable more members to take to the water and help the club to retain the interest of existing members, an important consideration now that a return to rowing in crew boats looks some way off. Their use as a community outreach boat and in conjunction with the club’s Learn to Row courses will provide a means for generating additional income.

The Rowing & Coaching Committee along with Community Coach Tim Morris have been working on the development of our Learn to Row courses and modifying what we offer in order to comply with social distancing regulations. We expect to be able to launch these in August as soon as we get clearance from British Rowing.

The continued support of members during the lockdown closure has been vital in enabling the club to cover its costs, and now that restrictions are slowly beginning to ease the vast majority of members have continued paying their subscriptions and the proportion of lost members has been relatively low, for which we are most grateful.

Some members have been going beyond the call of duty in order to provide support to the care sector. Tom Dower of the Masters squad helped to organise the Visors for Victory initiative through University Technical College South Durham of which he is Principal, raising funds to aid the supply of much needed Personal Protective Equipment for health care workers and delivering over 3000 visors to organisations across the North East. Aided by public donations Modern Persian Kitchen which is co-owned by Debbie Jahangiry from the Daytime rowers has delivered over 2000 meals in 12 weeks to staff at James Cook Hospital, the University Hospital of North Durham and North Tees Hospital, as well as to various care homes and local pharmacies.

As the lockdown eases members of staff have returned from furlough leave to work on a part time basis and it has been possible to set in place plans for reopening the caravan site and opening a beer garden which it is hoped will enable the club to generate much needed revenue.