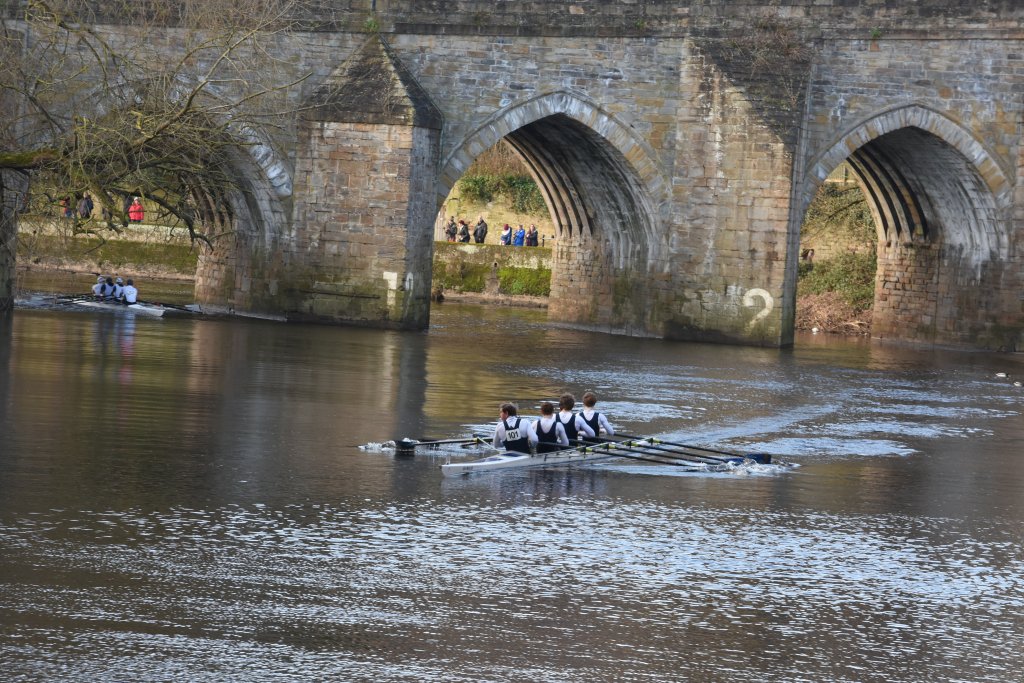 Durham Small Boats Head went ahead on February 1st after some initial concerns about the weather forecast, Durham’s topography affording sufficient shelter from the elements to prevent an addition to the long list of cancellations over the past year.

The decision to go ahead was vindicated, with the moderate south-westerly wind failing to trouble competitors, and although one or two visiting clubs chose not to risk towing their trailers in the wind 327 of the original 385 entrants completed the course. 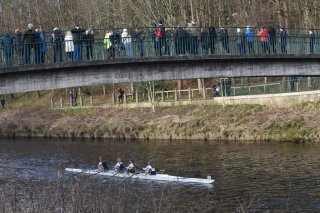 With a strong stream flowing it wasn’t a day for fast times over the 1800 metres but some compelling racing meant an exciting day against the backdrop of the World Heritage Site for rowers and spectators alike, not least to witness the drama unfold as crews negotiated the arches of Elvet Bridge. 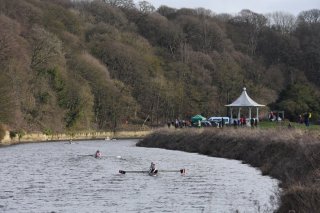 Traditionally held in its unique setting on the first weekend of February the Head acts as a curtain-raiser for the winter racing season before crews prepare for challenges to come in bigger boats on the Tyne and Thames. 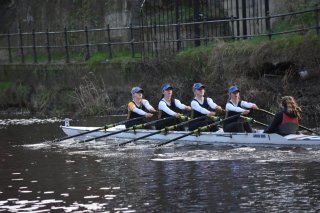 Having four divisions provides some flexibility for coaches to try out different combinations, while enabling organisers to maximise the number of entries, competitors ranging in age from J13 juniors to Masters H (70+) and coming from schools, colleges and clubs throughout the northern region and beyond. Durham Amateur Rowing Club, being the host club, provided the largest entry of 59, with the Durham Colleges between them accounting for a further 46. George Heriot’s School from Edinburgh was the best represented school team, providing stiff opposition for the junior squads from Durham School, St Leonard’s School, Queen Elizabeth High School and Yarm School. 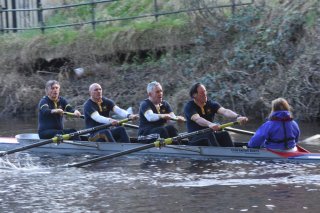 The fastest time of the day went to the Queen Elizabeth HS Open coxless quad in 6m 27.0s. The fastest Women’s crew was the WJ18 coxless quad from George Heriot’s School in 7m 18.5s.

Sixty-five events were contested, and after results were combined over the 4 divisions Durham ARC emerged as the most successful club in terms of victories with 22, while George Heriot’s School achieved 6 wins, Durham School, Yarm School and St Leonard’s School won 4, and Chester-le Street ARC, Tees RC and Tyne ARC 3 each. 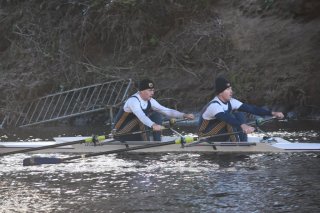 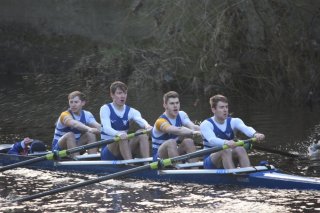 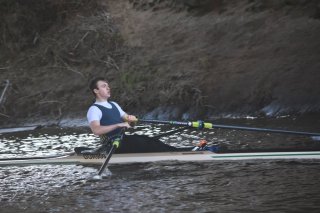 John Roxborough and Dan Pearson won the Open pair in 7.32.0.

DARC’s Adam Morris was the fastest single sculler of the day, winning the J18 1x in 7.25.7 in a close race with QEHS, Yarm School and Durham School who all finished within 3 seconds of one another, before Adam combined with the Yarm School sculler to win the J18 2x in 6.49.0. 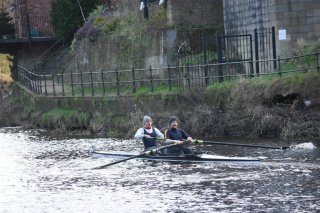 The Women’s coxless quads was hotly contested, with DARC’s junior squad racing two crews in band 1 against the senior women and Talkin Tarn masters. The junior 4x- of Ella Sampson, Elicia Baldwin, Mollie Coe and Madalyn Elmer ran out winners in 7.30.9. The second senior quad won in band 2, recording an identical time to the band 1 seniors in 7.36.1. 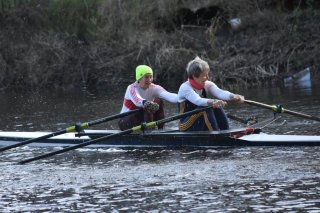 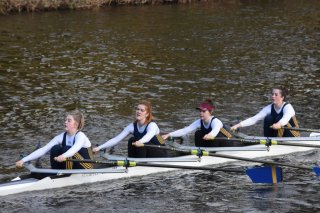 Gill Prescott and Eva Rankin raced their double scull at Women’s Masters D and Masters F, winning both events, with the faster time of 8.08.8 coming in division 2. 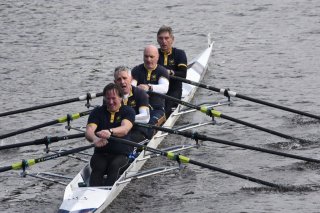 Durham ARC also did well in the younger junior age groups with the boys and girls J13 coxed quads each winning at the first time of asking, while the three DARC J14 boys coxed quads took first, third and fourth places, holding off opposition from QEHS, St Leonard’s and Yarm School. 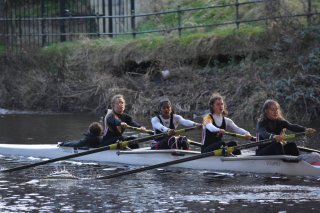 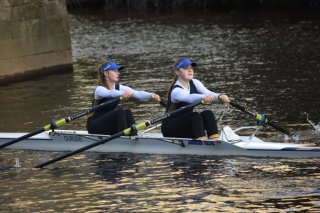 Tees Rowing Club had a successful day, winning the Open and J16 double sculls and the Open single sculls, and finishing 3rd in the Open quad sculls. 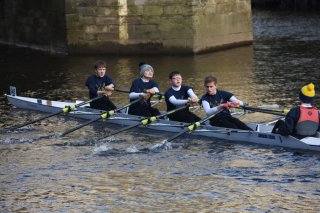 Following on from his success in winning 2 gold medals at the Mizuno British Rowing Indoor Championships in December Isaac Hillicks-Tulip of Tyne ARC won the J15 single sculls in 7.40.8 and also won the J16 1x in the following division. Gaining their first ever experience of the course the Tyne ARC J14 2x went under 9 minutes to win their event.

Ebchester Boat Club took part for the first time since the club reaffiliated last year after dissolution in 1974, entering a WJ16 composite quad with Chester-le-Street ARC. 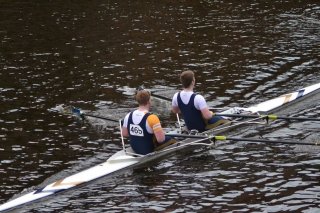 Feedback about the event has been very positive and hopefully the winter weather will be kind for the remainder of the head racing season.

Junior crews will be contesting places in the squad to represent the Northern Region at the Junior Inter-Regional Regatta at trials on Saturday. Meanwhile the Durham Colleges will be focused on the Novice Head and Senate Cup on Sunday.

After a year’s absence the BUCS Head returns to the River Tyne on February 22nd and 23rd when Durham and Newcastle Universities will be vying with opposition from around the UK, before crews look to the Tideway Heads in London in March.

SI Events Photography has provided photographs from each division and more can be found on the Durham ARC facebook page. 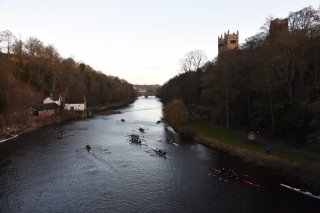