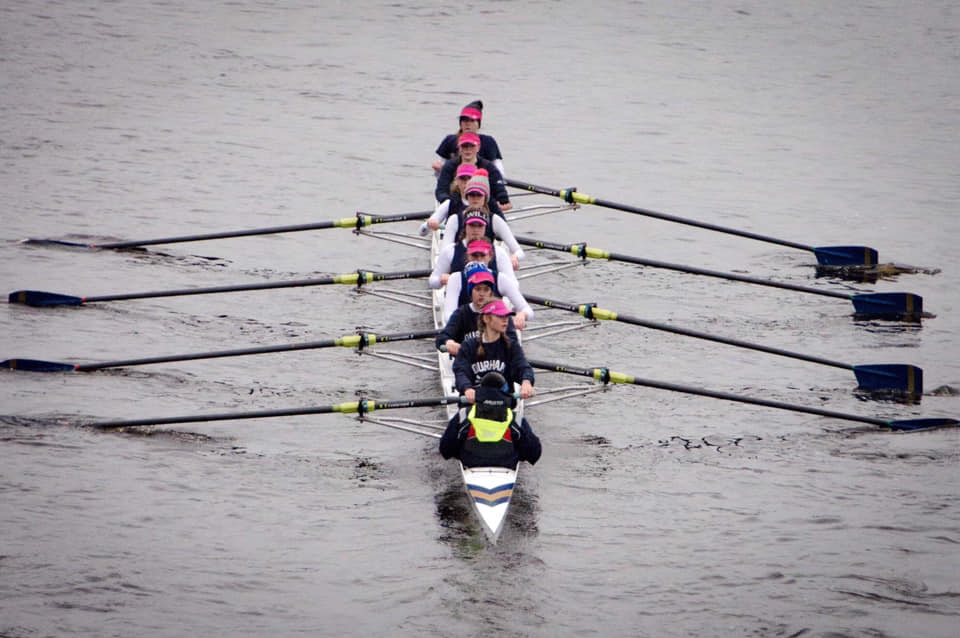 Arguably the biggest event in the British Rowing head racing calendar outside London Rutherford Head provided the last chance for the region’s rowers to race before the festive break. Traditionally associated with bad weather this year’s event on December 1st was no exception, with rain and low temperatures greeting the large turnout of nearly 260 crews racing in the larger boat classes over two divisions on the River Tyne. Competitors were drawn from all corners of the UK, and, with little wind and water conditions generally good, some excellent times were recorded for the 4.5 km course from Scotswood to Newburn. For others it was an opportunity to compete in the same race as some of the nation’s best rowers.

Great anticipation had preceded the event with entries opening at 6pm on November 1st only to be suspended little over an hour later as capacity was reached. As usual eights were the most popular boat type, accounting for nearly 90 of the entries, the senior Open and Women’s eights being sub-divided into 4 bands each. Strong competition saw Newcastle University claim overall victory in Open Division 1 in 14.08.3, closely followed by Edinburgh University and Tyne ARC, while in the senior Women’s eights London University held off the challenge of Edinburgh University and Thames RC to win band 1 in a time of 16.10.5.

Edinburgh University led the way in the quad sculling events, taking first and second places in the Open with a winning time of 14.38.3, and narrowly losing out to Newcastle University in the Women’s quad, the winning time being 17.20.8.

Outside the senior events Chester-le-Street ARC won the Junior J18 eights race in 16.24.3 and the Women’s J18 eight in 20.06.9, while the fastest Masters crew of the day was the Tyne ARC Masters E 8+ who finished on their home course in 16.41.9. The fastest Women’s Masters accolade went to the Durham ARC Women’s Masters E 8+, repeating the success of last year and winning their event in 19.50.2.

After recent success on the Tideway in the Veteran Fours Head Gill Prescott again formed a composite quad with Barnes Bridge Ladies and Kingston RC, winning the Women’s Masters F 4x- in 19.50.9, two minutes ahead of the DARC Women’s Masters E 4x- who were  placed 2nd of the four entries in 21.50.1.

There were some fine performances from other crews. As junior events were only offered for J16 and J18 age levels the DARC J15 girls (thanks to Claire Airey for the above photo from Newburn Bridge) entered in band 4 of the senior Women’s 8+ and finished 3rd in 20.28.1, only 10 seconds behind the winners from Edinburgh University.

Results from Division 1 and Division 2 are among other information to be found on the Tyne ARC website. Winning crew lists are on the Durham ARC Results page.

Al Johnston has provided photos on facebook from Division 1 and Division 2.

Much credit goes to the many volunteers involved in the organisation of such a successful event.