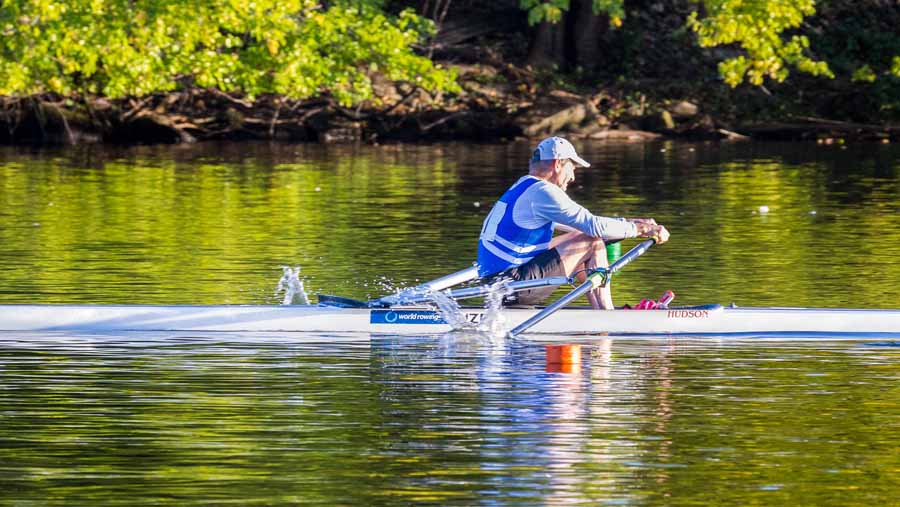 The first medal in this year’s Head of the Charles Regatta in Boston, Massachusetts on October 21st went to GB’s Tom Bishop, competing for Quintin BC in the Veteran 70+ single sculls.

Tom has connections with DARC dating from the 1970s. Formerly of Durham University he competed for DARC at the 1972 National Championships at Holme Pierrepont, Nottingham, taking a silver medal in the double sculls along with Geoff Potts. In the same year he was a member of the DARC Eight that took part in the Head of the River Race, the first time for 14 years that the club had fielded an eight in the race.

In 1973 he married Durham University graduate Diana Preston, who he had coached the previous year when she became DARC’s first international, representing GB in a single scull at the European Women’s Championships in Brandenburg, East Germany. At this time women members of the club were classed as associates and had no voting rights. The club only agreed to full voting rights for women at the 1975 AGM.

Both Tom and Diana then went on to represent Great Britain at the 1976 Montreal Olympics. After starting a family Diana took a long break, only returning to rowing recently. Since moving to Quintin Tom has teamed up with DARC veterans many times, most recently in a composite Masters F quad at the 2017 World Masters Regatta in Bled.