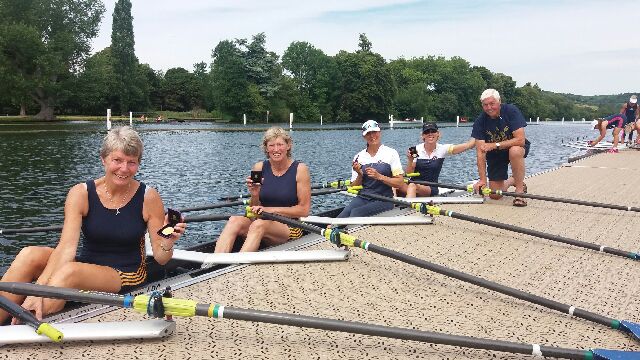 Durham ARC returned with 3 gold medals from 10 events entered at Henley Masters Regatta, the regatta established in 1994 and hosted by Upper Thames Rowing Club held on July 7th and 8th 2017, the week after Henley Royal Regatta. Competitors travel from all over the world to compete over 1000 metres on the famous Henley reach.

Gill was returning a favour to the Americans who had made it possible for her to race in the Head of the Charles Regatta (HoCR) last year as they had always wanted to race at Henley. A third member of the Long Beach RA contingent, Wendy O’Brian, raced at Henley in the Women’s Masters D 2x with Antonella Corazza from SC Varese, Italy (who had also raced with Gill in the 4x- at the HoCR) and they also won their event, ensuring all of the group came away with a Henley Medal.

A third gold for Durham ARC was secured by John Lund in a Masters H 4x- composite with Quintin BC and Wallingford RC, overcoming a Cambridge (USA)/Christiania (Norway) combination in the semi-final and Upper Thames RC in the final.

In their first appearance at Henley Kim Forster and Gabrielle Moore lost in the quarter-final of the WMasD 2x against Tideway Scullers, and the MasD 2x lost in the semi-final against Burton Leander.