The 2nd British Rowing European Tour took place between May 11th and 13th 2017 in Hamburg, Germany, following last year’s inaugural tour to Amsterdam. Both the European tours so far have been organised superbly by Richard Pickup of the Nottingham Explorers group of recreational rowers, affiliated to Nottingham Rowing Club, in conjunction with representatives of host clubs from the areas visited.

This year the British tour group consisted of 42 rowers and 2 non-rowing partners drawn from 13 different clubs and included Colin Lawson from Durham ARC. Three Hamburg clubs were involved in the arrangements to entertain the British tourers, Ruder-Gesellschaft Hansa, Hamburger Ruderinnen Club and the Wassersportabteilung SV Polizei, with Hans-Heinrich Busse of RG Hansa the co-ordinator in chief. Set on two lakes formed by the damming of the Alster River in the 13th century, the Free and Hanseatic city of Hamburg is an ideal location for touring, with around 20 rowing clubs in and around the city, its network of canals being crossed by some 2500 bridges, more than Amsterdam and Venice combined!

Boating took place from 3 clubs with the group sub-divided to enable a manageable number of crews to gather at each location, with crews allocated in advance to quads coxed by members of the host clubs and ‘doppelsechers’ (accommodating a crew of 6). Crews embarked from RG Hansa at the northern end of the Aussenalster lake and from the two clubs situated on the Isebekkanal for 2 days, exploring around 25km each day along Hamburg’s scenic waterways. A damp start on day one was followed by gloriously calm conditions until day two was curtailed by a thunderstorm. The tour included lunch stops at Wassersportabteilung SV Polizei on Friday and at RG Hansa on Saturday, the party returning on Friday evening to be entertained to a sumptuous dinner as guests at the RG Hansa clubhouse. 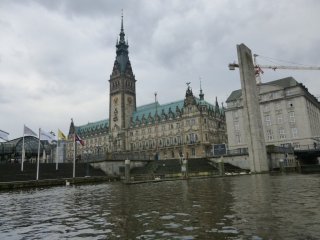 Touring is a form of recreational rowing more prevalent in continental Europe where there is an 80/20 ratio of recreational to competitive rowing, ensuring availability of good quality touring boats at many clubs. British Rowing’s Recreational Rowing Committee, chaired by John Turnbull of Weyfarers Rowing Club, has organised a UK Tour visiting different waterways within the United Kingdom each year since 1994, with plans for the silver anniversary tour on the Thames in 2018 well advanced.

Touring has been promoted increasingly in the UK since the launch of BR’s Explore Rowing programme by Sir Steve Redgrave in 2010.

The 2017 UK Tour is scheduled for August 24th to 27th on the Lancaster Canal with around 80 tourers expected to take part. Further details about this and other tours and touring can be found on the Recreational Rowing website.