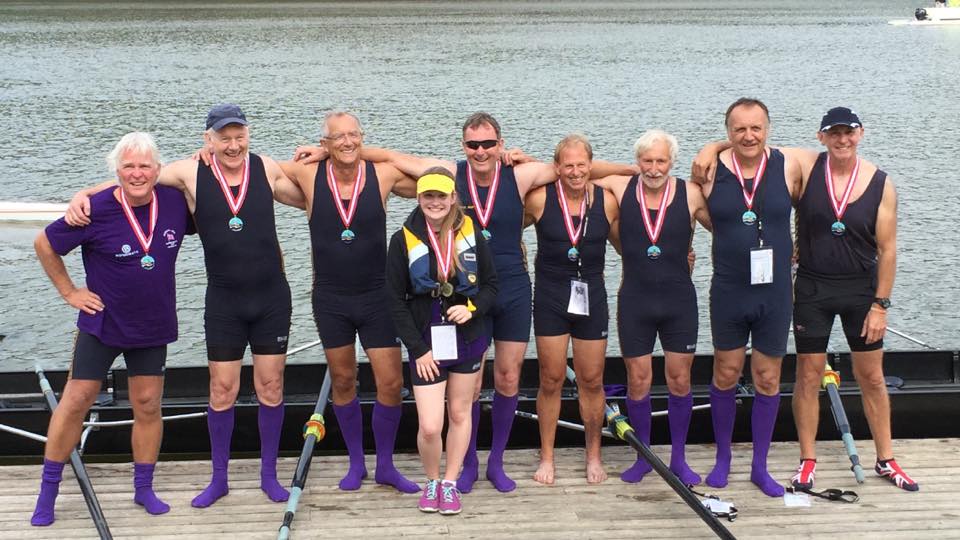 The Championships is a huge event, and welcomed 3451 rowers from 584 different clubs and from more than 40 countries. Masters rowers compete over a 1000 metre course with over 500 heats during the 4 days of competition. Races are organised into age categories from age 27 (Masters A) upwards, Masters E being for average ages 55-59, F for ages 60-64, G for 65-69 and K being for over 85s. Each heat is also a final with medals at stake.

World Masters is now a regular fixture for DARC. This year they took place on the World Rowing course at Lake Bagsvaerd, Copenhagen. The club concentrated on entries in the 55-70 year old bracket. In the absence of Gill Prescott due to family commitments this year, the sole female club representative was Sarah Rutter.

The Men’s Masters squad entered a variety of small boats, some more practised than others. This was apparent on the first day with a disappointing finish for the out-of-practice E2x of John Watkinson & club captain, Paul Rutter. Sarah Rutter, meanwhile, was doubling with Margit Rezacova from York City RC and they achieved a better result in WC2x. Conditions were difficult as the day progressed. As the wind picked up, the waves grew higher. The G4+ were a little disappointed with 4th place with Elvet Waterside proving difficult to handle in the rough conditions of a howling tail wind despite producing a fast time of 3m 42s. This was cox Elise Sanderson’s first international race & was quite a baptism of fire. Elise showed nerves of steel, handling the difficulties with style & aplomb.

Friday started with a very nice row by the E4+ stroked by John Appleby. This four have been together through the summer & their preparation paid off. They finished 2nd to Moscow Dynamo who were the main opposition in most of our races.

Eights are what the Men’s Masters squad is all about & it was now the turn of the F8. In order to make the most of our F status we used 2 substitutes. From Upper Thames Rowing Club we had Clive Cooper & from Poole in Dorset, former Whitby Friendship rower Ray Wilson, in place of 2 of our older G oarsmen at bow pair. We had a lane in the middle of the course with Russians in lane four on our left & a good German crew from Bremen in lane 2 on our right. The Russian Moscow Dynamo four who we had come across so often had teamed up with a St Petersburg four to create our biggest threat. From the first stroke we shot ahead of the field. It was going so well that cox Elise Sanderson extended our start sequence so that by the 250 metre mark we were already a good 3/4 length ahead…at which point we became aware that the race was being stopped. Over in lane 8 the Japanese had gone out of lane & clashed with the Danes in lane 7! The race was to be restarted.

The Russians & Germans either side of us now knew what to expect from our start. They both went off much harder in order to try & stay in the race. Again we were significantly ahead by 250m. The crews on either side continued to keep a high tempo but could not stop us steadily pulling away. By the 500m mark we had pulled to a clear length lead & the opposition were effectively blown. We cruised home to a comfortable victory. A Gold for the club & in particular, a first international win for cox Elise Sanderson.

John Appleby then had to climb into his single to compete in G1x. This was a race too much after the excitement of the 8 even though John finished in a respectable 4th place and that after having to use spare sculls when his new sculls were stolen.

Saturday started with another largely unpracticed F4+. They finished in 5th place. Paul Rutter then had his E1x race. Paul started slowly & was last in the field early on. However he picked up speed to work his way through the field for a 3rd place finish.

The G8 with Derek Gordon restored at bow & John Lund back in at 2 found themselves next to the Russian composite once again. A rather epic battle with them ensued with us taking a small lead early on, only to lose the lead by 750m. An early push for the finish took us past them but not enough to catch the American International crew of Occoquan, so we had to settle for the silver medal position. The final entry of the day was the F4x crew of Watkinson, Walker, Judson & Rutter. This is something of a development quad which has never before raced side by side. Settling for a highly respectable 4th place finish, we misinterpreted the finish pips & stopped rowing 2 strokes before the finish thereby losing 4th place by 0.2 second, a very frustrating way to lose a place in a race.

Sunday is mixed racing day. This is usually scratch crews. The Rutters combined and finished 5th in quite a compact field. John Appleby was drafted in by Scots from Loch Lomond & Clydesdale to form a very accomplished quad which went on to win impressively. Derek Gordon was also drafted into a MxdH8 (average age 70+) which was truly international consisting of 2 Swiss, 2 Germans, a Dane, one french, one american & Derek the one Briton. They overcame a similar international H crew to take the win & the medals.

The event marks the end of the racing season for this squad. Most of them will be putting their feet up for the autumn & will reflect on a season where the eight has won silver at National Masters at Holme Pierrepont, won F8s at Henley Masters & had a first and second place in F & G 8s at World Masters