Following the success of similar events last year it was decided to stage a scratch regatta where all DARC members were invited to sign up for a place in either an eight (for seniors) or a quad (for juniors) for a series of friendly races. May Day Bank Holiday was chosen as the date and 44 members from all sections of the club came forward. Arrangements were left in the capable hands of Sue Lyons and crews were drawn to ensure a fair mix of ability levels in each.

Four eights and 2 quads were put on the water and crews got into huddles to discuss tactics. Marshals were despatched to the start at Baths Bridge and the finish 500 metres upstream. Best of 3 races decided the outcome of the quads while competitors in the eights changed boats after each race to give everyone a turn in different types of boat, coxes remaining with their boat throughout, and each crew raced in turn against one of the other three.

After returning boats to the boathouse members retired to the bar where a BBQ was provided, weather conditions dictating that it should take place indoors. With captain Paul Rutter being a member of the victorious crew it fell to Richard Castling to present medals to the winners.. 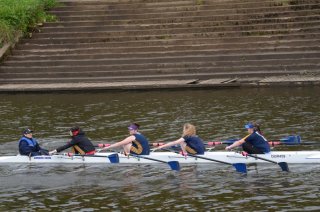 Thanks are owed to the volunteers who provided coxing and marshalling, without whom the event could not take place, and to the kitchen volunteers and staff for providing the BBQ. 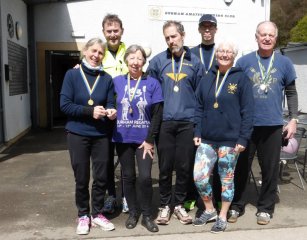 Such events provide an excellent opportunity for the club’s diverse membership to mingle and learn from one another’s experience. We hope to schedule similar occasions into the calendar in future.