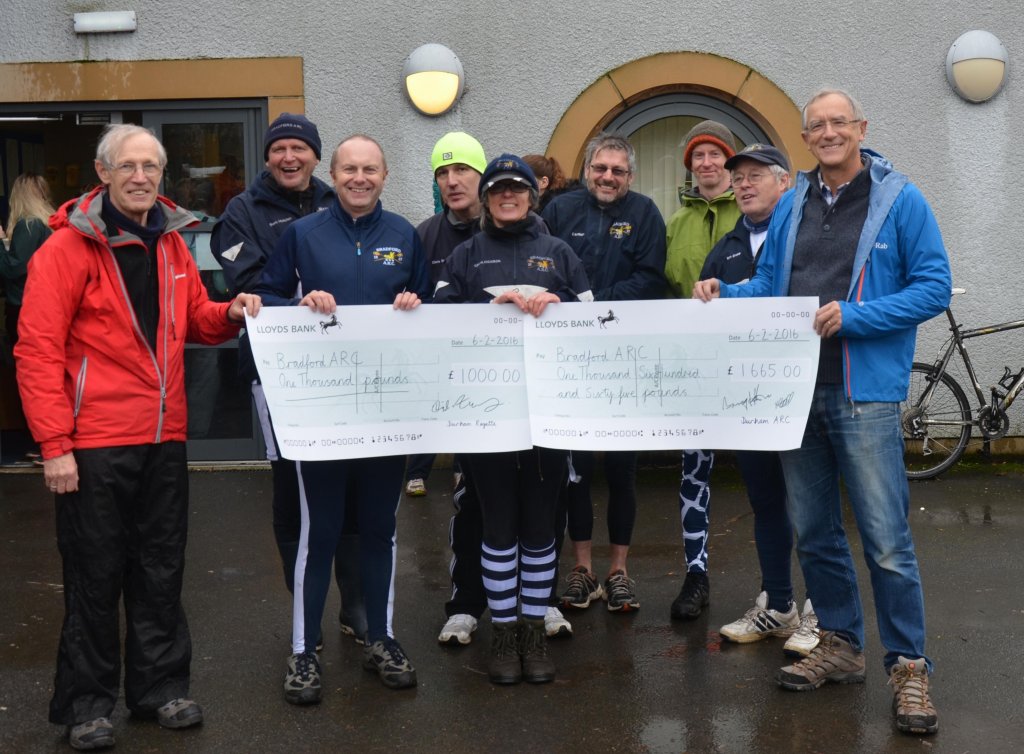 Being reliant on a weir for rowing themselves Durham rowers are very mindful of the situation in which Bradford rowers find themselves following the recent flood damage that led to the breach and collapse of the weir on the River Aire. They have therefore responded wholeheartedly to Bradford’s plea for help in funding the necessary repair work. The opportunity was taken on February 6th during Durham Small Boats Head to pass on donations to rowers from Bradford taking part in the races.

Dr Celia Hickson, the President of Bradford ARC, accepted a cheque for £1665 from Durham ARC Chairman Dr Martin Judson, representing a donation from club funds backed up by contributions from individual club members. She was then presented with a second cheque for £1000 on behalf of Durham Regatta by Regatta Chairman Dr Nigel van Zwanenberg.

It is hoped that the donations will go some way towards achieving the £20,000 shortfall that it is estimated is required to pay for the repair.

On Boxing Day the North of England was battered by Storm Eva and “unprecedented” amounts of rain fell onto already soaked ground. The Aire Valley was badly affected and river levels rose to new highs. At Bradford Amateur Rowing Club on the River Aire the water rose rapidly and cut off the club and boat houses by lunchtime, the flood water inundating the club house for the first time in living memory. Boats floated off racks and the muddy water flowed everywhere.

Once the flood water subsided BARC members took stock of the situation; boats were damaged and clubhouse was covered in a layer of mud, but most distressing of all the weir which keeps our 750m rowable was breached.

Our weir, which once fed the mill race for a corn mill opposite, has been in place for a very long time; some records putting a weir at Hirst Weir in the 1400’s. It had sustained damage in the past during flood events, but this was on a new scale. The BARC committee had been in dialogue with the Environment Agency about improving the weir and had started to build a weir fund. A local contractor put the repair costs at £85,000.

In the days after Boxing Day we realised that we were going to have to act fast to save the weir and that conventional funding routes would perhaps not meet our urgent pace. Sport England gave us the go ahead to apply to their Flood Relief Fund retrospectively which took some pressure off. We applied to City of Bradford MDC flood relief scheme, one for the Aire Valley, to Greggs Environmental Fund, to anyone who would accept our applications!

We had a JustGiving page and we asked members to donate as much as they felt able to get the repairs underway and to ask others who may be able to support our cause; and Social Media did its magic and the news spread amongst our local community and rowing community at large. Facebook and Twitter were aflame with the news that we were in trouble and donations started to arrive from all over the world.

Durham Amateur Rowing Club also a weir dependent club contacted us to say they would help. We had seen that their water was affected and bridges on their stretch were clogged with flood debris. When Durham Regatta said they would help us too we got quite emotional and then as members contributed too it can only be described as overwhelming. We felt supported and lifted as suddenly we were not alone, our rowing community/family had heard of our plight and responded. Whilst we are still working hard to reach our fundraising target our mood has lightened and we know we can do this. Thanks Durham, you are our heroes!