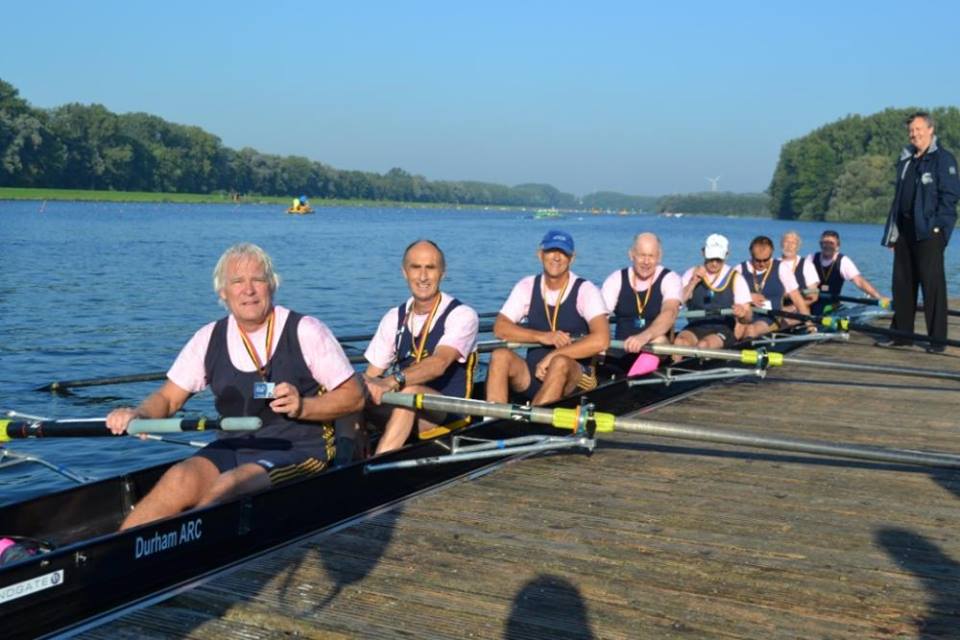 An eyewitness view from Martin Judson…

The World Rowing Masters Regatta 2015 was held at the FISA category A standard course of Hazewinkel, Belgium on September 10-13th. Three and a half thousand rowers from around the world aged 27 to 89 gathered for the event. DARC had 31 entries targeting the D to G (50-70 year old) age band. The format is for eight lanes of racing over 1000 meters, no heats, all straight finals with only a winners prize.

First up on Thursday was Gill Prescott producing a win in E single sculls (55-59 year band). Her power in the boat was plain to see as she overturned a significant deficit at halfway to win by a couple of lengths. She was quickly followed by the MasE 4+ event with an Appleby stroked four & George Adair stroked four, both in the same heat. Conditions were quite good and the 2 DARC boats were in the outside lanes. The Appleby boat took the medals while George’s crew fought hard for 4th place out of the seven competing boats. Two wins in the first two races seemed rather too good to be true but the day finished with two 5th places for the men’s F coxless four & Gill in a C (42-49 year average age) quad.

Friday started with drama. DARC Ages invited 2 Durham alumni with the requisite years to make G8 (65-69). Colin Barrett, formerly of Bede in the 1960’s and ex-DARC member Tom Bishop came in to replace a couple of the younger crew members to bring the average age to 65. On the start Colin told me that he was rowing bow side for the first time this year!. We struggled to find our rhythm while some Dutchmen to our right pulled away to a 1/2 length lead at 500 meters, at which point there was a tremendous kerfuffle as John Appleby at 2 caught an almighty “over the head” type crab. He did recover it extremely skilfully though (the moment has been caught on YouTube and is all so fast it can be easily missed). The boat settled to row through the opposition and take the medals. Gill had further wins in E2x and D4x in collaboration with other clubs. A DARC/Tees composite in E8 took a respectable 3rd place while there was an even better 2nd place finish for the E double of Paul Rutter & John Watkinson, and a 4th place for the G double of Andy Jaggard & John Lund.

Saturdays racing yielded an excellent win against very strong opposition in F8. This “DARC Ages” squad had been training hard for this specific event and in recent weeks have benefitted from input by the club coach, Debbie Connolly. There is a short video. Gill Prescott had another win in women’s E quads this time to take her medal haul to 4 which eventually became five on Sunday with a win in mixed F quads with John Appleby who was the men’s most successful competitor with 4 wins. There were more excellent second places in doubles for John Appleby & Mickey Stevens and for Gill in a composite women’s D double and in a men’s E quad stroked by John Watkinson.

A win in a mixed international composite crew of H-K eights (70-89 years old) on Sunday  involved club wheeler-dealer and driver Derek Gordon. This completed a haul of wins in nine different categories for the club, a truly magnificent performance. Gill Prescott further consolidated her position in women’s Masters rowing. Her coach, Geoff Graham, has been key to Gill’s success story. Several club members won multiple medals and with strong performances right across the board, Durham ARC is well respected for producing high quality racing crews.