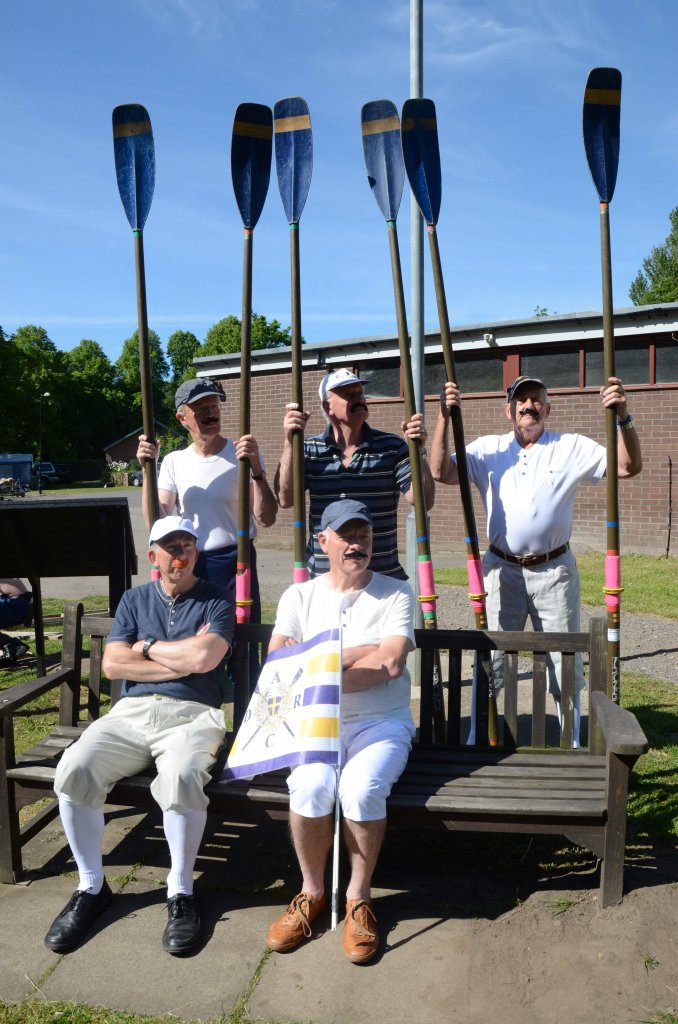 Durham ARC scullers took time out for a photo-call prior to re-enactment races, which will take place at this year’s Durham Regatta  between 1.30 and 2.30pm on June 13th.

The re-enactment will take the form of a 9-abreast sculling race in skiffs, giving a flavour of what the regatta was like in its early years.

The transcript below, taken from the Durham Regatta programme of 1836, when the regatta took place in midweek, gives some additional insight.

The regatta will commence at 6pm – when the boats will take their respective stations below the Prebends Bridge, with their crews in uniform, flags flying, and attended by a band of music. Shortly after 6 a signal gun will be fired, the band commence playing and the boats, after a short interval, move in procession to Elvet Bridge, where they will halt, the crews rise from their seats and the band play ‘God Save the King’. The band will then return to the Museum, the rowing boats proceed to a buoy fixed in the river opposite Pelaw Wood and shortly afterwards return to the Prebends Bridge, where a race between the 6-oared boats will commence and terminate. The races being concluded for the evening visitors will be invited to take seats in the boats, which will return in procession, accompanied by the band, to and from Old Durham, and reach the Museum at 9 o’clock, when the medals will be presented to their respective owners.

NB. There will be a Ball in the evening at the Assembly Rooms.

The boats will be manned and take their respective stations as on the preceding evening, shortly before one o’clock, when a salute will be fired, and the band play ‘God Save the King’, the crews rising from their seats. The boats will then move in procession to Elvet Bridge, from whence the band, after playing ‘Rule Britannia’ will return to the Prebends Bridge, followed after a short period by the rowing boats. The races for the medals between the 4-oared boats will commence at two, and that between the skiffs at half past two. All the races will commence and terminate at the Prebends Bridge. Should the races be concluded at half past three, strangers will again be invited into the boats, which will row in order to and from Old Durham.

The boats will again be manned and ranged in procession at 8pm, and strangers invited to take seats in them, when the whole will proceed, accompanied by the band, to Old Durham, and return to the New Museum at nine, when the remaining medals will be presented to their respective owners. The boats will then arrange themselves in a line across the river, the band occupying a place in front of them, and an exhibition of fireworks commence at a quarter past nine, which will terminate by the ascent of a balloon with carmine lights.

Dates, times and locations may differ from 1836 but it is hoped that a sense of the history of the event can be re-created.