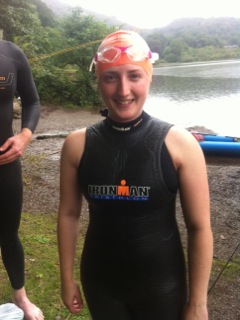 Sarah Wheater is an environmental scientist and novice rower. Originally from South Yorkshire, she moved to Durham in September 2012.

Through the sports and social club at work. I had a friend in Warrington who was helping organise a Learn to Row course and they needed an extra body .. so I said I’d make up the numbers. I thought it would be a nice thing to do for 6 weeks. Now rowing and swimming are my two sports.

So far, winning the recreational event at Durham Primary Regatta. It was the first time I had won anything … and that includes the egg and spoon race at Junior School.

Undoubtedly, when I stepped into the Mersey off the landing stage .. I was up to my neck, having been warned not to do that, 5 minutes earlier. The coach was struggling not to laugh as he hauled me out. A week later he did exactly the same thing – hah!

A magic device for keeping you in time. I’m always trying to stroke the boat from the bow seat.

It would be nice if the erg batteries weren’t constantly dying, it’s hard to do 6k with zero feedback.

It’s swimming in places like Ellerton Lake near Richmond, or in the Sea. Last year I went on a swimming holiday to the Scilly Islands. We were doing about 3 miles a day, swimming between the islands. We swam with seals, normally you get a wetsuit on but I didn’t want to miss the seals so I swam in my costume. Another time I’ve swum in Loch Earn in Scotland, the water was 8 degrees.

It would be a risk if you didn’t know what you were doing – your body has to get acclimatised. Obviously, it isn’t something you should try first time alone, and with no advice, but plenty of people swim outdoors, even in the winter. You can do the ICE MILE. That’s a mile in water under 5 degrees, with no wetsuit .. now that is a little crazy!

So … you know what they say, Sarah “Swimming with Seals” Wheater …

As someone interested in environmental issues and as an environmental scientist, Sarah is promoting the CHECK-CLEAN-DRY campaign at DARC – see the news article, ‘Sarah warns of Killer Shrimp‘, to explain what this is all about.