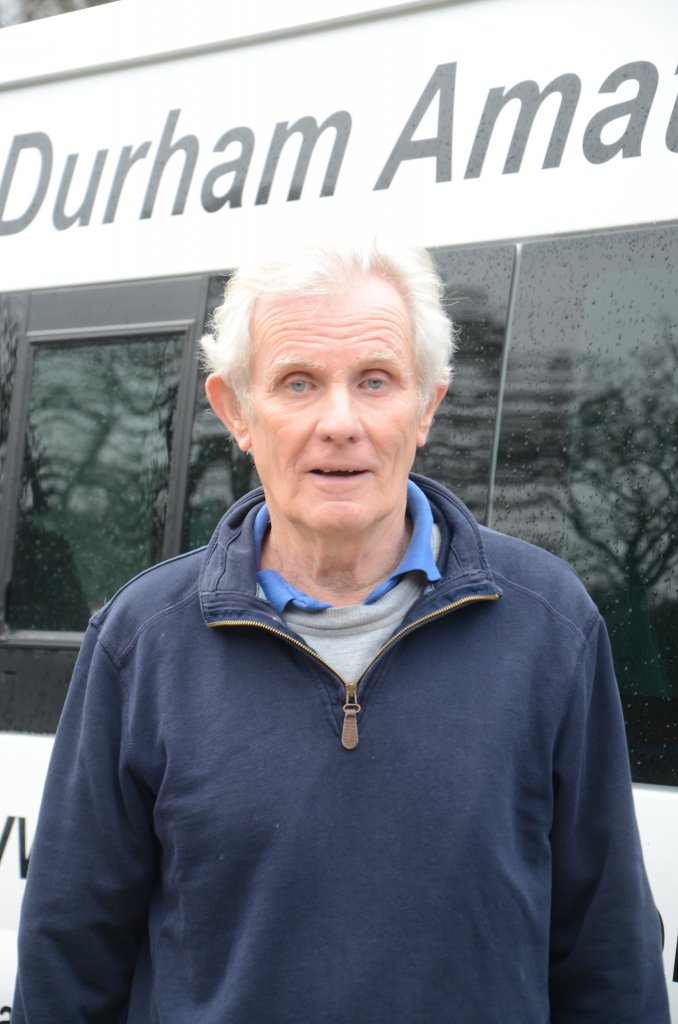 John Riach rowed many years ago, at the Royal Grammar in Newcastle, and took part in the first Durham Head in 1959 in a ‘maiden’ crew (for all you millenials, that’s the old term for ‘novice’). A civil engineer, John worked all over the country until his retirement a few years ago.

Andy: John, I’ve had problems with my name, a few years ago the commentator at Tees was describing “Haggard” coming down the course. How do you pronounce yours?

I was on a course for people with bad backs. At the end of the course, Bill Pollard (previous Explore Rowing co-ordinator) came along – rowing was one of the options for carrying on exercise .. and the place was free!

How bad was your back?

17 years ago, the doctor said, you’ve got around another 4 years on painkillers, and then you’ll need a major back operation. Since I started rowing, my back’s been better than at any time in the last 15 years, and I havn’t needed an operation. So, I’d say to anyone in a similar position – don’t be put off

The Great Tyne Row. (25k Newburn to Tynemouth).  I was delighted to be able to complete it at over 75 (that’s age, not rating) together with some youngsters, average age 69½.

Sitting in the middle of the Wear, as the 125 (wooden 4) gradually sank having had its’ bottom ripped out by a shopping trolley – we were close to the old railway bridge. We had to get to the very steep bank, scramble up, and then work out how to recover the boat.

(Editors note. Despite this unlucky experience, John says that the Rec. rowers are not the Wreck rowers of some parts of the club…. ouch)

Have some goal to work towards. Last year it was the Great Tyne Row. This year it’s Durham Head, and then the Sunday League.

… a lot less healthy than I am now

That the Genie always appears at the end of the outing and washes down the boat for us. (Yes John, and Bill Grant would probably say that some members do genuinely believe in the existence of this same Genie)

John, can you explain for the rest of the club what Recreational Rowing is about?

I think the term “Recreational” is wrong – it implies non-competitive. We’ve been going several years now and things are changing. At first there was little involvement in regattas, but now we’re diversifying .. some people want to develop their skills .. some are happy to stay where they are. And we’re getting involved in many other activities for the club.

We know you socialise and raise some money from drinking a lot of coffee, but what else do you do?

Yes, we just handed over £2500 to the club from the coffee profits and from several mini events. We put up sheds, paint fences, refurbish oars, often clean the steps after floods. Perhaps, most important at least 75% of the kitchen volunteers for functions are rec rowers (editor’s note: this IS the major fundraiser for the club). We’re planning a project to rub down and re-varnish the wooden boats. And 6 or 7 rec. rowers regularly work on each Explore – Learn to Row course as helpers.

Of course we have a lot more time than other younger members, but there’s a lot of skills and expertise available to the club. People who have run international companies and so on.

That is fantastic. You clearly do a lot for the Club, what can the Club do for you?

OK .. that we only get the old wooden boats and don’t have access to some fine boats.

We’d welcome more coaching and more equipment. That’s not to criticise the coaching we have which is great. But the priority tends to be on beginners with the other left to their own devices. We’d like to see various levels, in rec rowing, each with their own coach. We’ve been talking to Jacki (coaching co-ordinator) about a possible ‘off peak’ development squad. And rec rowers going into the mainstream of regattas.

Hang on .. you’re talking about fine boats and regattas. Many people would say if you want to do that you should become full members?

But we are using a facility that’s standing empty and equipment that wouldn’t be used otherwise (in off peak hours).

As regards the use of some fine boats, exactly the same criteria and test of competence and standards should be used for us, as for full members before using certain boats. At the moment there are some inconsistencies – for example someone joins a development squad and straightaway has access to a fine boat , whilst perhaps having less experience and skills than some rec rowers.

And of course, if we came down on Saturdays and Sunday mornings the club would be more overcrowded.

But don’t get me wrong we’re very pleased to have joined the club, and we hope to add a lot of value to the club.

John, there’s no doubt about that. It’s good to understand more about rec rowing and I hope other members will have picked up a few things, about what you do, and some of your views.

By the way, will you be rowing as ‘maidens’ at Durham Small Boats Head. I’ll watch out for that.