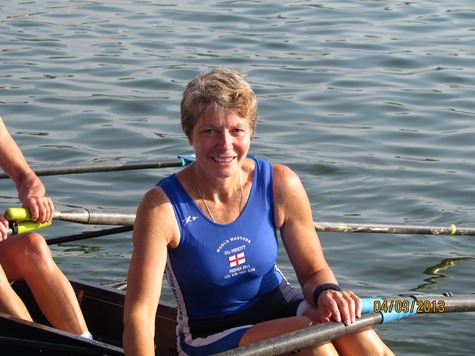 It’s been another award-winning week for the unstoppable Gill Prescott.

On Thursday 5th December she won the Northern Echo Local Heroes Award for Outstanding Performance of the Year, after winning the Durham Regional Award. Two days later, she followed this with  a Championship Record breaking performance at the British Indoor Rowing Championships in Cardiff on the 7thDecember.

Gill’s time of 7.23.3 smashed the existing 55-59 age record by 5 seconds and was only 2 seconds slower than her own world record.  Also joining Gill on the winner’s podium that day was erging supremo Roger Stainforth, in the 65-69 group, with a winning time of 7.13.

On receiving the award for Outstanding Performance, Gill said “It is lovely to receive this recognition however I am just doing something I really enjoy!!… Geoff, as ever, also deserves the recognition as a first class coach”.

Club Chairman, Martin Judson, commented;”Gill, Roger & Geoff work extremely hard to reach these levels of performance. There is no secret to what they do – it is based on many hours of tough training. This aspiration & commitment is a wonderful example to everyone at the club & the reward is continuing outstanding results. We applaud their success.”

Just to recap, Gill’s achievements for this year have included:

So, well done again to Gill, Geoff and Roger for representing Durham so well at all of their events and continuing thanks to Roger for sharing his erg tips with the Recreational Rowers on Monday mornings. Maybe we’ll see some more entries in the older age groups next year? What a great end to 2013..