A dedicated volunteer from Durham Amateur Rowing Club has been recognised in the British Rowing Volunteer of the Year Awards 2011. Peter Burdess, a member of Durham ARC since 1950, won the North East Open award at the ceremony, held on Saturday  19th November at the historic Watermen’s Hall in central London.

Volunteers from the British Rowing regions were recognised at the awards lunch attended by volunteers, coaches and club officials from across the country.

“Today is all about you”, British Rowing Chairman Di Ellis told the assembled award-winners, “and our thanks for everything you do within our sport”

The award recognises Peter’s sheer dedication and enthusiasm in promoting rowing to all. Peter, now aged 84, still rows or coaches six days a week. Twice a week, he works with novice rowers who have learnt to row through the club’s very successful Explore Rowing programme, some of whom are also octogenarians. 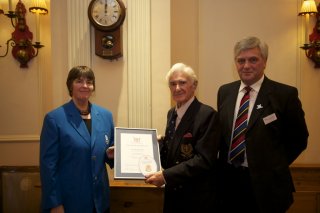 “What gives me most satisfaction is helping people stay fit and to enjoy their lives a bit more” he says. “I know they’re enjoying it as they turn up whatever the conditions”.