Over the four days of racing Durham had some very close racing on one occasion being piped to the post by 0.00.67 of a second.  One women veteran rower from DARC, Gill Prescott, really put on an outstanding performance winning 4, 1st place positions in the C2x, D2x, a Mxd composite 4x and a Mxd composite 2x coming 3rd and 5th in her 1x, 2nd in 2 Women’s Scottish composite 4x. 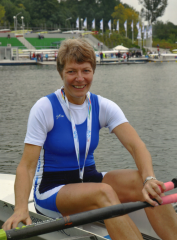