A large contingent of veteran rowers headed south to compete in Henley Veteran Regatta on 11/12 July 2008.

This Regatta has been held on the weekend following Henley Royal Regatta since 1994. Hosted at Upper Thames it is an internationally recognised event for veterans or masters crews. Competitors come from all over the world to compete.

There were some exciting races and we made our opposition work hard.  Several of the opposing boats contained crews of international standard, including five times Olympic gold medallist Sir Steve Redgrave who competed in a Men’s 8+.

The Men’s Veteran E 4+ of Mickey Stevens, Paul Stanley, Kim Metcalfe, John Appleby and coxed by Emma Watcham won gold.  This was on the back of their gold medal success at the National Veteran Championships at Nottingham in July.  They will be going for gold for the third time at the World Masters Championships in Lithuania in September. 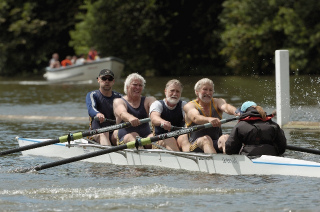 The Women’s Squad were well represented at the regatta, competing in single, double and quad sculling events as well as Women’s Veteran 4+ and 8+ races.  The 8+ crew fought to the line against their opposition but were beaten by the Upper Thames crew which included Olympic silver medallists and international GB rowers.  Competing at a high standard was excellent race experience for the crews.  A high point of the regatta for the Women’s Squad was the chance to meet and get their photo taken with Sir Steve Redgrave in between races. 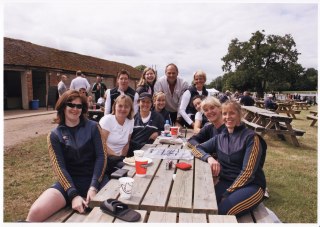