The Long Distance Sculling Series (LDS) finished a week early after it was decided to cancel the final round at Durham along with Durham Autumn Small Boats Head (SBH), planned for November 9th, because elevated river levels made it impossible to provide safe and fair racing.

2019 has been a difficult year as regards unpredictable river conditions, with both days of Durham Regatta also cancelled in June – and Durham Autumn Sprint Regatta was called off in September because of an unviable entry.

The river level chart below illustrates the rise and fall over the week preceding the LDS/SBH. 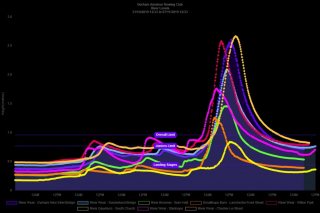 Demand for competition during the autumn heads season has increased hugely in recent years. The Northern Rowing Council’s LDS Series had been running for several years but the number of events and their location had remained uncertain until 2013 when the event returned to Durham following a break. Some rounds included an associated SBH, others didn’t.

For a long time Durham has staged a very popular Small Boats Head with 4 divisions allowing for up to 400 entries in February each year, but it was not until 2015 that an additional Autumn SBH was offered to coincide with the Durham LDS round, allowing sweep-oar entries as well as sculling, which made it very attractive particularly to the College sector who focus on sweep-oar competitions, of which few were available in the region during the heads season.

The LDS settled on 5 rounds, increasing to 6 with the addition of Berwick in 2015, four of them having an associated SBH in the afternoon.

From around 120 entries for the 2013 Durham LDS the combined entry increased to over 200 in 2015. Demand continued to increase and in 2017 it was decided to add a second division of the SBH, thus accommodating over 100 in the LDS and almost 200 in the SBH, SBH results being aggregated over the two divisions.

Such was the demand this year that entries were suspended the day after opening and it was decided that, rather than reject around 25% of entries, a second division of the LDS would provide places for a combined entry of 378, This was the plan until the weather intervened! – an early LDS/SBH division 0 for the City based clubs, including 29 SBH entries representing 11 of the 16 Durham Colleges, and 51 LDS entries from Durham ARC, Durham School and St. Leonard’s School, followed by LDS division 1 and SBH divisions 1 and 2, each including around 100 entries.

Naturally the cancellation was a great disappointment for the 59 DARC crews entered (up from 44 last year) as well as for other clubs around the region.

With entries and weather equally unpredictable are we heading for 4 divisions in the autumn to match the 4 in February? The limiting factor is the hours of daylight. 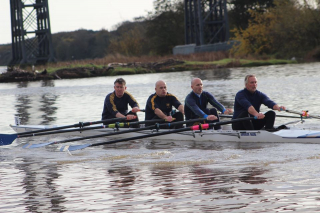 The previous week’s competition at Wansbeck, in ideal weather, therefore proved to be the final round of the LDS Series and included some good performances from the 23 DARC crews taking part, although times recorded suggest the distance was shorter than the advertised 3.5km. 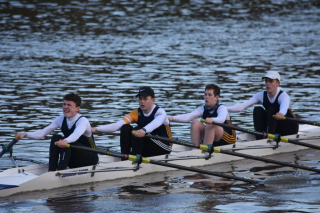 Paul Rutter and David Heppell in the Masters E 2x won for the 4th time in 5 LDS starts. Unlike previous rounds Kim Forster and David Muse in the Mixed Masters C 2x had some opposition so were awarded a win in the LDS, as were the MasD 4x- (Gary McCarthy, Dave Murray, Mick Downworth and Peter Robinson) and Andy Jaggard in the MasG 1x. The Women’s Masters G 4x- (Lynn Pain, Hazel Stainforth, Carolyn Edwards and Caroline Scholl) overcame the DARC WMasE crew (Julie Kitson, Vickie Jackson, Linda Forwood and Nicola Field) but missed out on extending their winning run, taking second place by 0.7 seconds after the handicap to the Talkin Tarn WMasC 4x-, while Joyce Collett and Sarah Rutter in the WMasF 2x overhauled Berwick’s WMasC 2x by 17 seconds after application of the handicap. 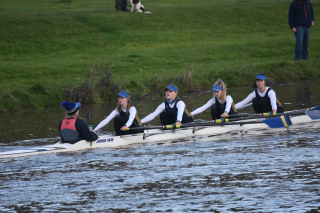 George Watson’s College from Edinburgh entered a strong team in both the LDS and SBH divisions but the DARC J16 boys 4x- stroked by Thomas Woods emerged as the fastest open coxless quad in the SBH division, in which Jennifer Napora and the Chester-le-Street/DARC J15 girls coxed quad were also winners, as were the DARC MasD 4+ (John Liddell, Tom Dower, Alastair Edge and Arthur Glasfeld, coxed by Clive Hole) who won for the second time in 2 starts. Competitive times were recorded by several other crews. 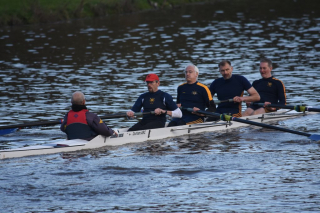 The most successful DARC crew in the LDS Series is therefore the Masters E 2x of Paul Rutter and David Heppell with 4 wins and a second place, with the Women’s Masters G 4x- (Lynn Pain, Hazel Stainforth, Carolyn Edwards and Caroline Scholl) gaining 2 wins and 2 second places, and Jacob Windle winning twice from 2 starts in the J16 1x. 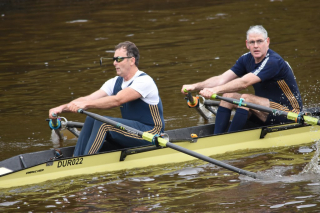 Over the 3 SBH competitions there were 2 wins from 2 starts for the Masters D 4+ (John Liddell, Tom Dower, Alastair Edge and Arthur Glasfeld, coxed by Clive Hole).

Links to full results and times from each round can be found on the LDS Series page. 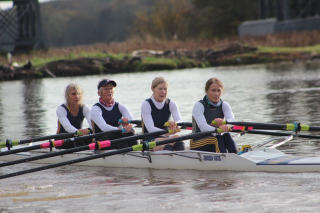 As a postscript to the weekend cancellation Sunday’s Ergathon organized by Durham College Rowing at DARC was a great success with 19 teams and 220 people rowing in relays on ergos the distance from Lands End to John o’Groats to raise funds for the mental health charity Mind.

The next rowing competition at DARC is Durham Small Boats Head on February 1st 2020.