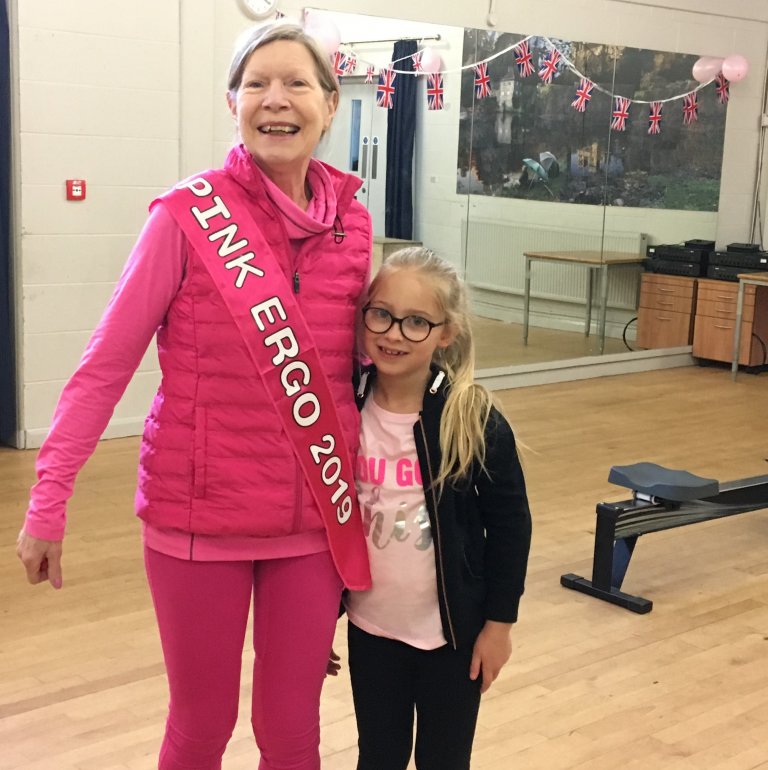 There’s been no time for resting on his laurels for DARC’s Roger Stainforth since celebrating a fifth success at the British Rowing Indoor Championships in December. Never one to forego a challenge Roger’s latest endeavour stemmed from a chance conversation at the Burns Night supper which led to him gathering together a team for the Big Pink Ergo 100km Challenge.

“Here’s a question that might test even the teams in ‘Brain of Britain’. What connects Burns Night, 27 people aged 7 to 74, 100km on the ergo, breast cancer and Harry Potter?

The answer begins at Durham ARC’s Burns Night supper. A day or two earlier a notice appeared on the club’s notice board announcing that a Durham University student, Alexandra Nicholas, was organising a BIG PINK ERGO 100km challenge for teams to raise money for breast cancer charities on 24 February 2019. The event was to be held at DARC where we have a fleet of new ergos and the club is always happy to be involved in this admirable enterprise. It was very poignant for me because my wife, Hazel, had surgery and radiotherapy treatment from September to December 2018 for breast cancer.

After the haggis, neeps and tatties I started sounding out people about getting a DARC team together to enter and was pleasantly surprised by the positive responses.

As it turned out 24 February was not a good day for many DARC people, Alexandra was happy we wanted to join in so we fixed on Sunday 3 March. Having had experience of being a member of two 100km world record setting 70+ relay teams – small team 2016 and large team 2017 – I didn’t think the frenetic race format would work for a charity event, and in the end we decided on four squads of four ‘core’ rowers rowing 500m each in relays for two hours, and others joining in when convenient for them. It worked out really well, a total of 27 people participated; many stayed all day and did their bit in each of the four squads. Appropriately kitted out all in pink, Hazel set the event going at 0930 with the first 500m, did more 500m during the course of the day and took us through the final moments as the meter counted down to zero.

What about the statistics of the day? The 100km was achieved by 27 rowers in 7h 03m 6.6s at an average split of 2.06.9 and stroke rate of 26. I’d thought 7½-8 hours would be achievable but what happens when you have competitive people taking turns on ergos? They compete! We all enjoyed the assertive 500m pieces by former GB rower Tom Edwards powering to split times of which the rest of us can only dream. There were some notable 500m by the women and as the metres ticked down so did the projected time. 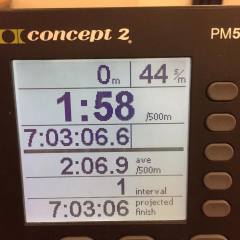 What about the final clue and Harry Potter? No, he wasn’t in the team but he was in the mind of our youngest and most determined rower, 7 years old Sophia, who asked me, the oldest in the team, ‘Do you know about Harry Potter?’ I had to confess that I didn’t know much. Thereafter, between my 500m pieces I was treated to picture cards and stories about Mr Potter. Perhaps British Rowing could introduce something similar at BRIC 2019!

So far the money raised for breast cancer charities is £770 and there’s more to come. 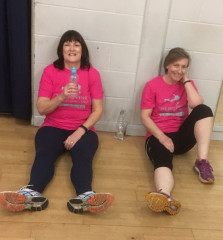 Thank you everyone for the wonderful effort, generosity and the cakes and flapjack that sustained us through the seven hours. Together we can beat the Big C and a little useful wave of the wand from Harry Potter wouldn’t go amiss as well.”

Roger’s first indoor rowing competition at the age of 60 was at the 2004 BIRC in Birmingham. When the event became BRIC in February 2015 and moved to the Lee Valley Velodrome he set the British record for 70+ Hwt of 7.08.7 and has won the gold medal in the four subsequent BRICs.