Honours were divided equally between juniors, seniors and masters as Durham ARC secured 9 wins from 42 entries at the 2018 Durham Regatta, the premier regatta in the north of England.

Three of the wins came on Saturday and six on Sunday, two of these coming on the 1800-metre long course. 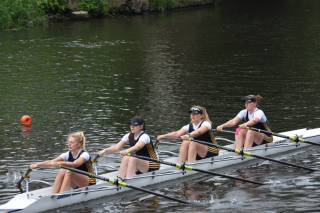 Next was a win for the women’s elite coxless quad of Chloe Readman-Bell, Gabrielle Maxfield, Rachael O’Connor and Beth Holmes who overcame Leeds University before winning by 2 lengths against Talkin Tarn in the final.

The final victory on Saturday went to Adam Morris who won easily against Cambois to take the J16 single sculls, winning the North of England Sculling Championship. 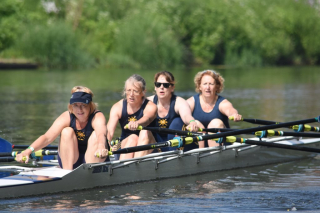 On Sunday the women’s masters E crew of Nicola Field, Vickie Jackson, Carole McCarthy and Julie Kitson followed up their victory over the Doncaster masters C quad at Durham City Regatta by beating the same opposition more convincingly to win by 2 and a half lengths.

In the first of the long course finals the J18 coxless quad of Matthew Edge, Josh Stephenson, Adam Morris and Harry Coe overcame Yarm School to win in a time of 5.48.4 sec.

The next win for the juniors was for the J14 girls coxed quad, with Miriam Stewart, Niamh Lang, Alice Davies and Georgia Abbot, coxed by Thomas Woods, beating Hexham on the short course in the semi-final before winning against St Leonard’s School to take the Arthur Stainsby Memoria Trophy. 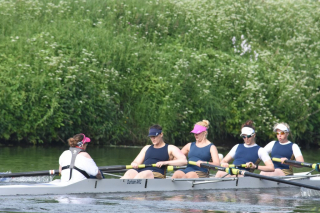 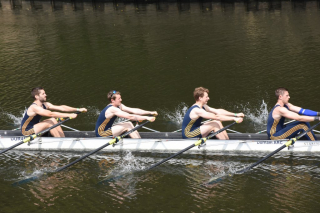 The senior men’s crew of Will Hamlyn, Reece Stockport, Nicolas Baird and David Rutter overcame Newcastle University in the semi-final of the open championship coxless quad, before rowing over on the long course in the final in a time of 5.49.5 sec after their opposition from Durham University scratched.

The final success of the day went to the masters E coxless quad, with Richard Court, John Watkinson, Paul Rutter and John Lyons overcoming two Hexham crews to win the masters DEF handicap, winning by half a length in the final in 2.12.8 sec.

There were many more creditable performances in a very successful regatta. Full results are available on the Durham Regatta website.

If you are interested in joining the senior men’s or women’s squad please get in touch with the club captain by email to captain@durham-arc.org.uk