DARC rowers maintained links with neighbouring clubs by accepting an invitation to visit Gateshead Community Rowing Club for a social visit on August 17th. A group of 11 daytime rowers enjoyed a first outing rowing along the River Derwent in a selection of Gateshead’s expanding fleet of boats before a BBQ at the new clubhouse.

Since the club was formed in 2014 Gateshead has relocated a short distance along the Tyne from the Sea Cadets building at Derwenthaugh Marina which was its base at the time of the launch of Harry Clasper. They are now fortunate to enjoy access to the River Derwent as well as the Tyne. 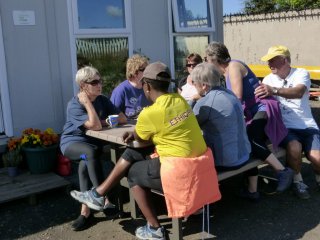 Several clubs in the Northern Region and beyond have developing recreational groups who enjoy visiting one another and networking. See our recreational events page for more about activities in which we take part. We look forward to continued good relations.