DARC’s Senior Women’s Squad is seeking new members. It’s Summer and Debbie has just sent out her e-mail giving exit routes from Learn to Row courses, others are moving into the region from elsewhere and some who are eligible may be considering moving squads. Please don’t delay if thinking of joining us, we use the summer break to integrate new members and develop our technique so the sooner you join in the better it is for all!

If joining from Learn to Row please don’t feel intimidated, we are prepared for you and are extremely patient and welcoming. This is a great squad to be part of and this is borne out by the two testimonials below, the first from Lucy who joined from Learn to Row in Sept last year and the second from Josien a highly experienced Dutch rower who sadly moved back to Holland last year.

Come meet us and join in and we promise you’ll enjoy it!

In June 2014 I decided that I was looking for a new challenge. I’ve always loved being involved in sport but after starting a new job in Durham last year and curiously thinking, after seeing boats paddling easily up and down the river, ‘rowing…..how hard can that be?’ (I now laugh at my naivety!!) I enthusiastically signed up to the Learn to Row course I found on DARC’s website. 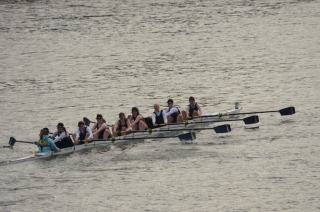 The Learn to Row course was great. Ran over ten weeks by the ever patient Debbie and a team of volunteers it gave me a great start in the basics of rowing, and certainly set me on the right track to get the most out of the sport I could. The club had recently had a ‘re-jig’ of squads after I had completed the course which meant that I could go straight into the women’s senior team ran by Phill and Chris Tully. I can honestly say since joining the squad in September I have never enjoyed sport more. I’ve felt frustrated, tired, angry, exhausted and colder than I thought I could ever be! But I LOVE rowing. It is my new addiction and supported by amazing coaches (who have been more patient and encouraging than any coach I have ever had the privilege to work with) and a fantastic squad it meant that after six months I got to race at WEHoRR. I can’t put into words the high of racing at such an event; apparently I couldn’t on the day either as I just simply burst into tears after the race was finished!

My first regatta season is now underway and I’m enjoying the new challenge. I would definitely recommend the club as a great way to get into exciting new sport and meet some great new people.

I’ve rowed for quite some time and in different places but my time in Durham was definitely my favourite! The scenery is picturesque, the club has a great atmosphere with lots going on and there are lots of regattas you can participate at all different levels. But the main reason that I liked it was the women’s squad!
I met some really nice girls by joining the squad who made my time in Durham as good as it was. And next to it I really enjoyed the rowing that is of a pretty high standard (not Olympic level but still good) because everybody is committed and motivated and people stick to the schedule. But it is okay if you miss a training once in a while. (For me that is the perfect combination after years of rowing at a high level and some years with total incapable rowers…) There was only one thing that did bother me and that was when girls joined the squad (for a while) and treating it as some kind of consumption good (like a gym) and not realising what an amazing thing it is that Phill (and Alison btw) does. Having a coach on the bank every outing and land training is not an ordinary thing.
Not that I ever felt bad for him cause I believe if you’re just giving it your best and keep improving, bring some medals home and enjoy yourself everybody is happy. So go DARC!

For more information about the Senior Women’s squad email Phill Tully at phillip.tully@btinternet.com