Bradford ARC hosts an annual invitation scratch regatta known as the War of the Roses which sees veteran rowers of all standards from across the north of England converging on Bradford’s Victorian clubhouse in its picturesque setting on the River Aire at Saltaire.

This year’s event was held on Saturday April 26th and, as a result of an invitation following Bradford’s visits to the Northern Sunday League, nine of DARC’s recreational rowers went along and enjoyed a fabulous day out. 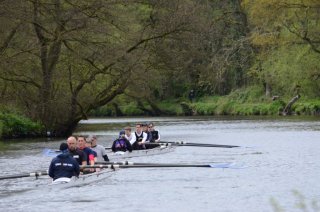 Some 72 names from 9 different clubs went into the hat from which mixed crews were drawn out to form teams of 4 who then took part in knock-out sweep rowing and sculling competitions, with members meeting for the first time on the day and tactics (if any) being agreed. Drawing different teams for the rowing and sculling elements added to the mayhem. 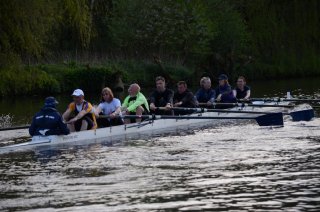 The emphasis is on fun rather than anything too competitive, a winning model and an example for future events. It was something of a revelation, as well as valuable experience, with the rec rowers getting an opportunity to mingle with more experienced participants from other clubs for a series of sprint races in fine boats fitted with cox boxes, and even the chance to row in a bow-rigged 4+.

Despite being armed with a sheaf of maps the day got off to a less than auspicious start for the navigationally challenged among us, with our inability to find suitable glasses resulting in unscheduled sightseeing around Wetherby, before we got caught up in traffic heading for the Harrogate Flower Show. It did however allow the keen ornithologists to indulge in some red kite spotting. Bradford’s clubhouse certainly has an enviable setting, as we discovered when we eventually found a means of crossing the river to get to the entrance. 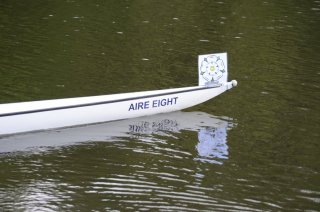 Racing gets underway about 1pm and continues for 5 or 6 hours with preliminary rounds and a straight knock-out competition in sweep rowing format followed by the same for sculling. At the end of the day there’s a one-off race between 2 randomly selected 8+s representing the White Rose of Yorkshire and the Red Rose of Lancashire. Afterwards everyone retires to the splendid clubhouse for a curry supper and medal presentation. 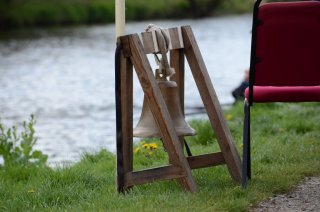 Being located so close to the Saltaire World Heritage Site a combined visit would have been ideal, but with the tight schedule this was not to be. After meeting our respective teams the fun started with us confusing our crew number with our race number, but some hasty boat-swapping soon got us underway. The ‘winner stays on’ (sometimes) rule led to more confusion but Bradford had matters well in hand. Aided by the finish bell nobody went close to going over the weir so the grab rope suspended decoratively across the river wasn’t brought into action. 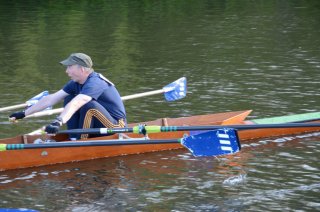 Colin drew a good York and Mersey combination in the 4+ who after 5 races made it through to the final and finished runners-up to Hollingworth Lake/Mersey/York opposition after a restart, following the only collision of the afternoon. The mixture of bow- and stroke-rigged boats added to the novelty. 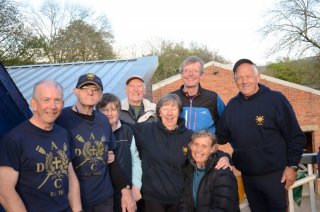 In the 4x+ event victory went to a Hollingworth Lake/Tees/Mersey/York combination including Ernie from Tees. Joe represented the White Rose in the War of the Roses 8+ race in which the Red Rose crew was victorious.

After all this we were ready for our curry. The success of the day is in the shared experience and the opportunity it offers to form new acquaintances and renew friendships. 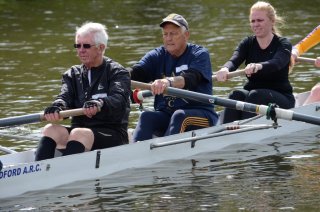 The day certainly went down well with Gerry… 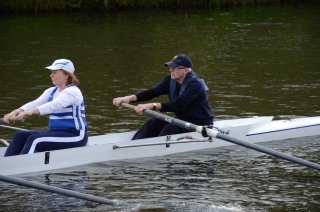 Hi to all. Just a take on the trip to Bradford ARC, for myself it was a great day out and was enjoyed by all who made the trip. Just to see a 4+ cross the finish line with Stewart in a mixed crew at bow was special, and the same for Joe and Margaret. I think all the rec members put in an outstanding performance for DARC. We made new friends from York, Doncaster, Mersey, Runcorn… and we hope to see them in the near future at Durham. Also it was good to see John and Ernie from Tees…and a nice curry to finish off the day. I would have liked my name pulled out to row in the eights for the last race, but it was not to be….

Kind Regards to you all 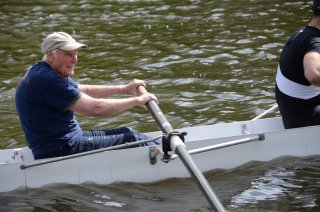 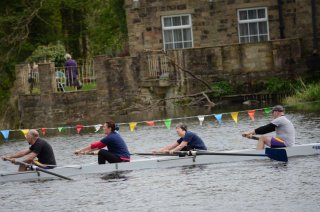