John first heard about the Explore Rowing course at Durham Amateur Rowing Club two years ago, he had been suffering from lower back pain for over 20 years, and his intake of painkillers was steadily increasing. He was diabetic and had high cholesterol levels. Even though John doubted that he would be able to manage such a strenuous activity, he decided to give rowing a try …

Nicola had some experience of rowing at school and when she moved to Durham decided to enquire about rowing ..

Deborah decided to sign up for an explore rowing course shortly after moving to the area. At the age of 30 she was anxious that she’d left it a bit late to start rowing ..

Shirley, following a major car accident in 1977, had ongoing deteriorating back problems, needing major back surgery in 2000 and in 2010. In 2012 after taking early retirement she was in constant pain, needing increasing pain relief and was at the “end of her tether”. Shirley signed up for a learn to row course in May 2012 but had concerns that there wouldn’t be “a hope in hell” of sitting in a boat…

Joyce was stressed and tired with the daily grind of work, had lost interest in going to the gym, and needed a fun activity to re-charge her batteries and get herself fit … 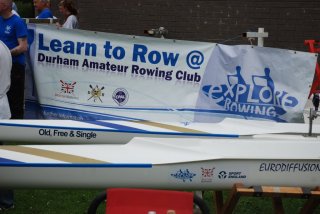 The EXPLORE – LEARN TO ROW COURSES have been running at Durham Amateur Rowing Club for the last 2 years. A new set of courses is running this year. The course is for adult (16+) beginners and no experience of rowing is necessary. On the course a team of coaches and helpers will introduce course members to the basics of rowing, sculling, coxing and indoor rowing. There is a choice of 5 week (twice a week courses) or 10 week (once a week courses) – see course dates below.

So how did it work out for John, Nicola, Shirley, and Joyce. Sadly they decided rowing was not for them …

“The benefits of regular rowing have transformed my life. My back is strengthened and I no longer need painkillers. The diabetes and cholesterol are under control without the need for medication, and my social life – and mental health – are greatly improved. The decision to give rowing a try, has opened up a marvellous new chapter in our lives”

“I have improved my level of fitness, general well being, and my social life. I have taken the Level 2 coaching course and feel committed to both the club and sport. I am impressed by the wide range of ages and people who feel it is a sport for life”

“We had a good mix of ages from 20s to 60s, both men and women. The course was good fun week after week, and everyone always stayed on for a few drinks at the end of the session. Three years on I’m a fully signed up member, regularly competing at regattas and head races all over the county and have even found myself in the position of Regatta Secretary for the club!”

“Initially, I could barely get in the boat and had to be dragged out! My flexibility was so poor I could only reach ½ slide. However, the craic was good, the people welcoming and friendly and I loved being able to do some exercise, however limited … so where am I, I 8 months on … I can reach full slide with ease, I’m still not comfortable at ‘easy oars’ but I can cope better and we rarely stop and sit still anyway! I rowed throughout the winter in rain, sleet, and snow. I took part in my first Sunday League regatta yesterday. I am now a leaner, fitter, rowing machine with (according to my doctor) the blood pressure of a 19year old.”

“I now find the exhilaration of a good row, with a friendly crew and  motivational coxswain hard to resist, and am happy to row 3 or 4 times a week. I still experience some stress but it’s more about the conditions of the river and whether I’ll be able to get out on the water or not .. I have dropped a dress size, sleep like a log, and have so much energy. The club provides the opportunity to make new friends, take on voluntary activities and to feel part of a warm community.. it’s a fantastic way to increase both your physical and mental well being”

For details and how to sign up go to