On July 14th new ground was broken when, at the invitation of Tees Rowing Club, a group of 14 daytime and masters rowers from Durham ARC joined Tees RC to row the 18 mile round trip along the River Tees from Stockton to Yarm and back, a venture first proposed in 2011.

Along with other clubs Tees and Durham have forged a relationship as a result of signing up to British Rowing’s Explore Rowing movement in 2010. This introduced the notion of members of any affiliated club being able to visit other clubs, sharing equipment and facilities and exploring one another’s waterways. A further step forward saw the introduction of the Northern Sunday League in 2012 and, from October 2012, regular exchange visits started to take place between the two clubs. Earlier this year we also welcomed visitors from Nottingham and Hexham Rowing Clubs to Durham. Thus far visits to Tees had only entailed rowing the shorter 5km course upstream so the longer trip of around 14km was the next obvious step. The intrepid explorers duly accepted the invitation to take up the challenge, arriving bright and early at the Tees Watersports Centre to be assigned to a mixture of eight, quad, double and singles. Joyce Collett and Sonny Shepherd were first to set off in a double, followed closely by Dorothy Featherstone with a Tees quad, leaving the crew of the eight to get the Tees Transporter 8+ out on the water and await the last minute arrival of their coxes, Caroline Scholl and Clive Hole, who were going to cox one way each and scull the other way in Clive’s single. Fortunately coxes and boat arrived in time, accompanied by John Lyons who also brought along his single for the return trip. In ideal conditions a lovely morning ensued as Kalpana Ganatra, Gene Dobson, Aisling Dutton, Linda Forwood, Sue Lyons, Ray Dominy, Debbie Jahangiry and Colin Lawson boldly ventured upstream of the Pipe Bridge in the eight with Caroline at the helm to explore the beautiful environs of Yarm for the first time, rowing through the arches of the road and rail bridges and back to land on the pontoon for a quick snack and visit to the splendid facilities of Yarm School. With the double and quad having set off on the return journey to free up space on the pontoon Clive duly arrived in his single to be alerted by Debbie to the bleating of a distressed lamb that had strayed into the river on the opposite bank, so, after seeing off Caroline for the return journey in the single, Clive and John Lund set off heroically in a launch to effect a rescue before returning for Clive to take up the coxes seat in the 8+. 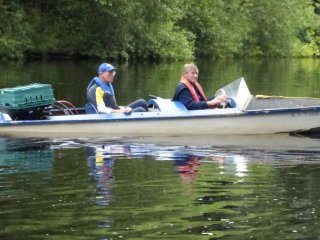 A limitation of the River Wear at Durham is the relatively short 2km course so the opportunity to complete a longer distance without turning round is most welcome. All had a great time and arrived safely back at Tees by lunchtime to enjoy the sumptuous BBQ and plentiful supply of cakes kindly provided for us, a fitting way to round off a memorable experience. As always thanks go to the members of Tees for organising the outing as well as providing safety backup, coaching advice and hospitality.