With 350 entries and 272 races scheduled over 11 hours for the Saturday of this year’s Durham City Regatta there was huge disappointment when the weather once again chose to be unkind and heavy rainfall the previous day led to the cancellation of the entire first day’s programme on safety grounds. The yo-yo nature of the river level remains a constant frustration for DARC, causing regular event cancellations.

Fortunately the level had fallen sufficiently by Sunday to allow the second of the 2 scheduled days to go ahead on May 10th. This was to be a more informal day’s racing in memory of Bill Grant who died whilst coaching a crew from the riverbank in February, all proceeds going to the Great North Air Ambulance. Seventy nine competitors duly signed up to take part in scratch Eights and Quads races with crews drawn at random – quads for the under-16 juniors and eights for those aged 16 and over. 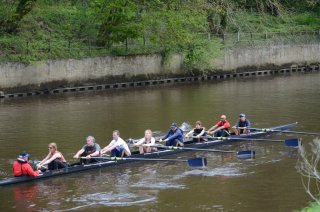 Races took the form of a round-robin competition with 6 eights and 5 coxed quads on the water at the same time, with each crew getting 5 or 6 races over a 300 metre course. Some remarkably close contests ensued and nobody was over-concerned about the result – more important was having a good time and raising a total of £460 for the Great North Air Ambulance. Trophies were presented to the winning crews in both competitions.

It was pleasing to see representatives from all parts of the club as well as others from around the region coming together to support the cause, an opportunity for mixed ability, experience and background to get to know one another and enjoy the day – and consume the plentiful supply of bacon sandwiches, chilli and cakes left over from Saturday.