Last weekend would have seen the first of the 2021 Tideway Heads contested on the River Thames, had the lockdown and the closure of Hammersmith Bridge not construed otherwise.

The Women’s Eights Head of the River Race (WEHoRR) therefore took place on Saturday, March 6th in a fashion never previously witnessed, which saw over 600 athletes signed up on Zoom Ergos to cover the course distance on ergos in their own homes. They were joined online by former Olympians including Dame Katherine Grainger, Jess Eddie and Frances Houghton in crew 51 (the bow number traditionally assigned to the GB squad for the race), coxed by Zoe de Toledo, with officials including WEHoRR Chair Guin Batten and Sir Matthew Pinsent. A new course record of 17min 40sec was duly set!

Durham ARC was represented in NotWehorr2021 by an eight which included Ray Dominy, Gabby Maxfield, Libby Morris, Tilly Stoddart, Orlagh Windle, Fran Suggett, Alice Chilvers and Jennifer Napora. On this occasion it was not about the winning but of the taking part, in a triumph for the rowing community’s ability to come together to overcome adversity. The whole episode is expertly described by Patricia Carswell in her Girl on the River blog. 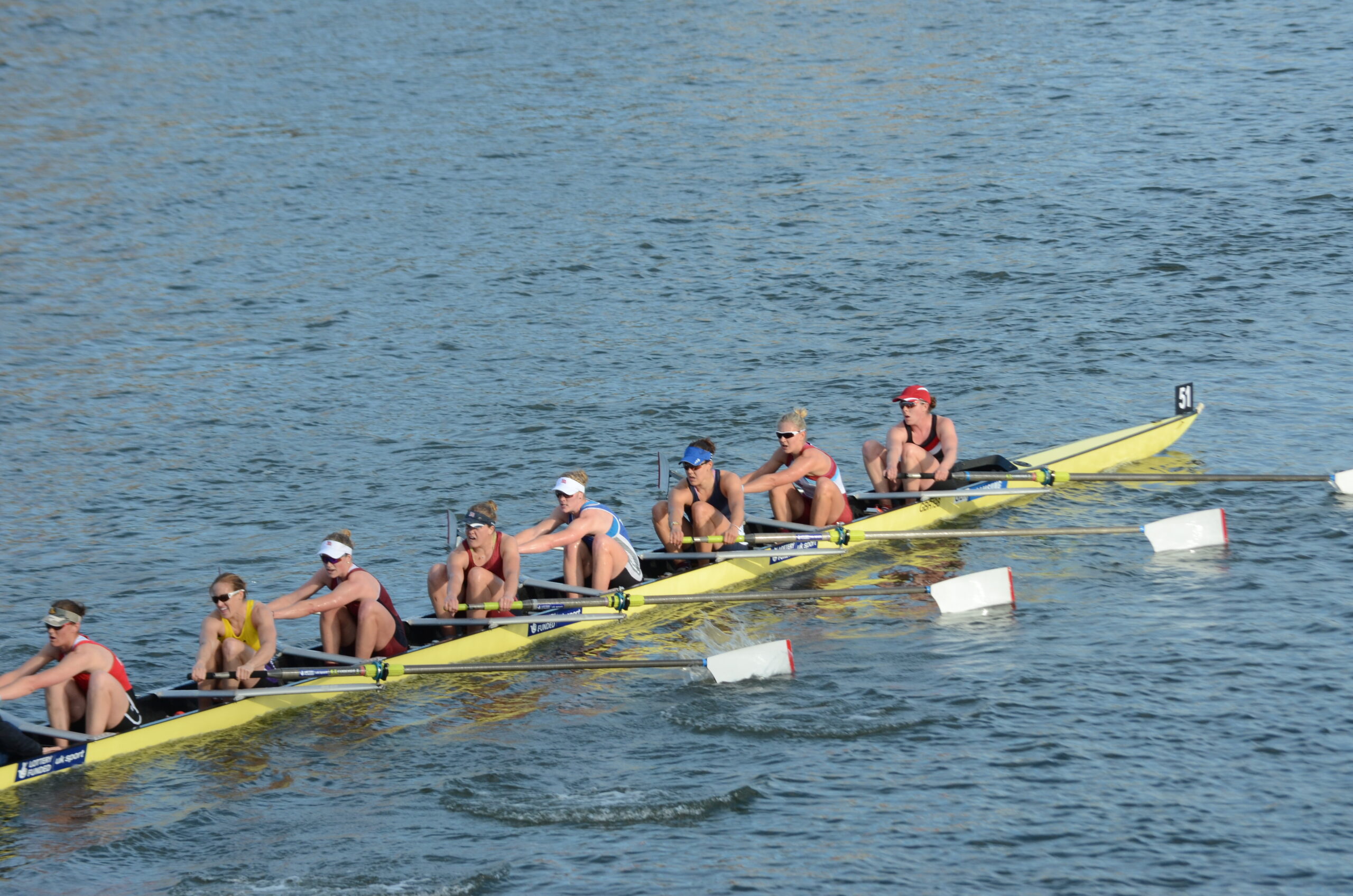 The following day was the CRASH-B US Indoor Rowing Virtual Championships, in which Roger Stainforth represented Durham ARC in the Masters I 2k race and was placed 4th in a time of 7:33.9. A stellar line-up included the current top 5 Concept2 ranked athletes in the world, although the World Champion, George Petelin of Australia, was a late withdrawal. The race was won by Franz van Mierlo of the Netherlands, with BRIC Champion Robert Lee (USA) second, and Wyatt Hume (USA) third. Isaiah Harrison of the USA followed up his World Indoor success by winning the Open 2k event in 5:48.9. All the results are here.

The CRASH B-Sprints (Charles River All-Star Has-Beens) first began in the 1980s when a group of American Olympic athletes decided to host a race to break the monotony of winter training. The first races took place on the earliest model of the Concept2 rowing machine and were 5000 meters in length. In later editions, the races were shortened to 2,500 meters. In 1996, the first 2000m races were held and the event as we know it today was born. It went on to become the World Indoor Championships. The significance of the CRASH-B has diminished since the inception of the World Rowing Indoor Championships in 2017.

Other members of the DARC Masters squad have been challenging themselves during the lockdown by rowing the 96km length of the River Wear on ergos – a feat they plan to complete over the first 11 days of March. Meanwhile Learn to Row coach Tim Morris has recently completed a marathon to clock up 2 million metres for the season.

International Women’s Day was on March 8th which, among other things, served to highlight barriers that continue to exist for women in sport. There is some interesting discussion on this theme in episode 9 of the End of the Island podcast.

Information on the possible easing of lockdown measures remains sketchy, and a further update is awaited from British Rowing. Prospects for the coming season on the local regatta front are uncertain. Chester-le-Street Regatta (April 17th) and Tees Regatta (May 15th) have so far been cancelled. Durham City Regatta (May 8th and 9th) looks unlikely to take place as only intra-club events will be permitted at that time, although a club event might be feasible. Wansbeck appears more likely and Hexham and Talkin Tarn are still planning to stage regattas. Durham Regatta is considering various options.

Training in schools is allowed from March 8th which will enable the Schools Virtual Head to go ahead between March 22nd and April 4th for those school rowers who can participate on their own water. This rule does not apply to club juniors.

Oxford and Cambridge University crews have been given special dispensation by British Rowing which allows them to train as elite athletes in preparation for the Boat Race, a ‘behind closed doors’ race at Ely on April 4th.

The National Schools Regatta (NSR) proposes to divide into two events – Regatta 1 ‘behind closed doors’ on May 29th and 30th, for J16 to J18, and Regatta 2 – NSR Youth Festival on September 25th, for J14 to J16, both at Nottingham. September 25th is also the scheduled date for Durham Autumn Sprint Regatta.

A new series of British Rowing webinars commences in March, including the following –

The next phase of Step 1 of the UK Government’s easing of lockdown roadmap is due to take place on March 29th, allowing outdoor sports facilities to reopen.

The Club remains well positioned financially thanks to grants received during the lockdown and is looking forward to reopening when permitted. We are offering a takeaway and delivery service for Mothers Day on March 14th. 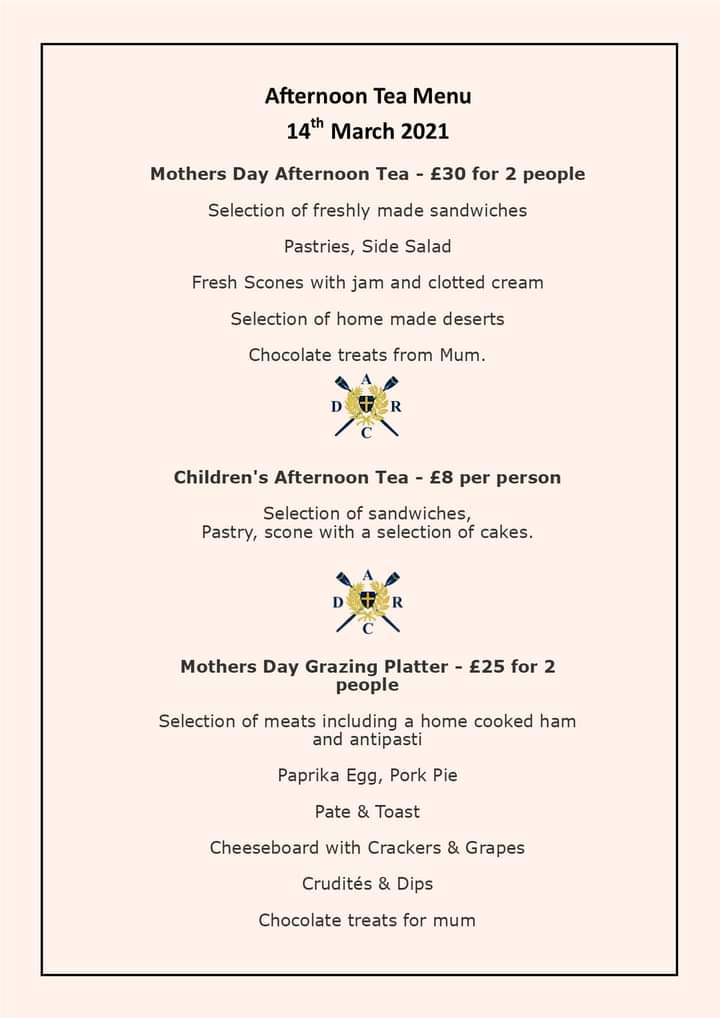